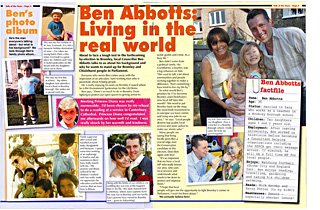 Bromley LibDem Candidate Ben Abbotts is delivering a TV Quick type leaflet round the constituency at the moment headlined BEN ABBOTTS: LIVING IN THE REAL WORLD. The real world of LibDem by election leaflets maybe - the only thing missing is the slogan BEN ABBOTTS WINNING HERE or one of the LibDem dodgy bar graphs. Or maybe they're on the other side.

Lots of lovely pics of our Ben are proudly displayed. Ben as a baby. Ben as a child. Ben getting hitched. Ben face painting. Ben with children. And then there is a picture of him with some Asian children. We'll return to that one a bit later, so do check back.

There's even a pic of Princess Diana along with some words which sound as if they were written by a twelve year old. "Meeting Princess Diana was really memorable. I'd been chosen by my school to do a reading at a service in Canterbury Cathedral. Priness Diana congratulated me afterwards on how well I'd read. I was really struck by her warmth and kindess."

Really, Really! Enough! But there's more. Beside a beaming Ben on his first day at school we are allowed to enjoy these words of wisdom... "This was my first day at school. My eldest daughter now attends a school in Bromley Borough. She makes me so proud."

Not a single word of anything Ben actually believes in or has a view on. So next time the LibDems have a go at David Cameron for being 'policy-lite', quote this leaflet back at them.

Do check back a little later to learn more about young Ben's gap year in Asia. We think he may have been embellishing his Far East experience somewhat.
Posted by Iain Dale at 5:42 pm

Not sure I understand the point...

You know as well as I do that this is a standard Lib Dem byelection tactic and one that works well which is why I suspect you being critical of it.

Thats not to say I don't balk at some of the sub text. But this really isn't going to earn a place in the great byelection hall of fame when it comes to dodgy leaflets is it?

I take the point to be that David Cameron is going on Jonathan Ross etc with few policies, few answers, few decision's on important issues.

Ben has put out a leaflet with little info on- I am sure as part of a campaign where he sets out his ideas in other leaflets.

Iain, as libdem leaflets go ‘this one’ is not that bad, besides, it’s been so long since they had a candidate that wasn’t certifiable or a rampant sodomite leave them alone to celebrate the event with fluffy moments and pictures.

At least Ben Abbotts can fill his nomination papers in properly! LOL

Tabman, Nah, you're having a giraffe! Shall I save myself a visit to Bromley tomorrow then?!

Don't forget that despite Abbotts' (accurate) claims that in Sevenoaks the Lib Dems moved from third to second in 2005, there was also a 1.1% swing FROM the Lib Dems TO the Conservatives.

oldsarum - " rampant sodomite" how charming. Would you prefer a candidate who would introduce Levitical law so you could stone us?

According to the discussion on PBC he's bang to rights.

The LibDem up here in Moray used a similar thing - the ladies thought it was a copy of Take a Break or such which meant they started reading it before they realised it was a political pamphlet! Sneaky very sneaky. Mind you, the comments from the ladies then ranged from 'look at the state of her hair' to 'what a horrible dress' so it backfired in a way!

"Too often we see stations opting for lowest common denominator programming with countless reality and TV makeover shows. I simply do not accept that the British public are not interested in issues of a wider global significance." - John Barratt MP

I do wonder why this doesn't apply to their leaflets? Surely some mistake Ming?

david, is it also true they tried to pretend the local paper was backing them by printing their own quotes as if they were quotes from the newspaper?

Oh, wait, there's a link from this page.

And was there not some "poll" they kept using which had no basis in reality?

And their vote was?

That is truly awful in so many ways! I at first pondered the possibility you had put it together as a spoof!

Here's hoping for a similar result for the Lib Dems to that in a Hertfordshire district council by-election yesterday - 4th place with 6% of the vote.

What about the by-election result in Nascot for Watford Borough Council last week, eh Kate? Very quiet on that one, aren't you!?

Oh, come now, Iain! Leave him be! This is a mere problem to be brushed aside...

Spare a thought for the constituents of Blackpool South, who have an MP who unofficially lives in Brighton, a meagre 250 miles away.

Lib Dems being vacuous and launching negative personal attacks on the main opposition as they do in this leaflet is nothing new. The weakness of the attack chosen may be – Tory candidate has 3 jobs, or to put it another way already has a track record in public service and has real life experience as a barrister that will help when it comes to fixing the broken criminal justice acts passed over the last few years. My canvassing in B+C suggested that most of the electorate had no problem seeing through the Lib Dem crap. Just image what they would have printed if the Tory lived outside the ward, stood in another constituency in 2005 and was a professional lobbyist…

yeah, 'cos Beckenham is miles from Bromley. The prople who live there tend to be shorter and most of them are criminals.
This is parochialism gone mad.

I agree with you that it is unfortunate when politicians find it easier to be fluffy than to have policies to stand for. A bit like that guy who won an election on riding a bicycle altho' I believe he actually had a policy about leaving the EPP. I also agree with Anonymous about Beckenham.

As a former resident of RAVENSBOURNE Constituency, I can tell you that Bromley and Beckenham are so close together they used to be in the same constituency. Bromley and Chislehurst on the other hand, as any local knows, might as well be on different planets.

You're actually missing the point about the magazine.