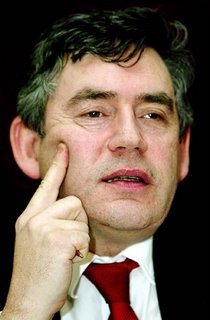 Perhaps I am missing something but can someone please explain to me why the BBC is leading its news bulletins and its onine news pages with the story - if it can be called that - of Gordon Brown supporting government policy on a replacement for Trident? Now if he didn't support it, that indeed would be a story. GORDON BROWN SUPPORTS GOVERNMENT POLICY is a bit like saying DAVID CAMERON THINKS THE CONSERVATIVE PARTY SHOULD CHANGE. Phew what a shocker. However, the BBC has managed to change it into a news story of sorts by rolling out the predictable lefties to slag him off. They've even got Sir Malcom Rifkind to have a go at the Dour One. BBC News website reports him describing Brown's remarks as "shabby". Sir Malcolm accused Mr Brown of trying to stifle a debate within the Labour Party and said: "It is not the responsibility of the chancellor in an after dinner speech to announce nuclear policy." Hmmm. Far be it from me to defend Britain's next future ex Prime Miniter (if you see what I mean) but as Chancellor surely he has an absolute right to defend government policy - and I am assuming Sir Malcolm actually agrees with him. This just gets more bizarre the more you think about it.

Yes, but the media have been covering the Cameron thing wall to wall too. :)

It's a good question, Iain, and I've attempted to answer it on
my blog.

My guess is the BBC are helping Gordon move the national debate onto a British subject - ie Nuclear deterrent - and away from supporting English football, the West Lothian Question and whether a Scots MP sitting for a Scots seat can be prime minister.

Its a shame we can't know what communications came in from the Labour spin machine with instructions on how to present this story.

Problem is here of the left.

They want Blair out because they never wanted him in. Add sacked ministers (rebels) to the mix and you have a strange cake.

There is no great left hope.

Gordon is next door and hammering his way in and is armed what?

Trident missiles? The CND left will love that.

Nick Robinson has a post that could almost be a direct response to this one, and that makes a fair degree of sense.

Gordon Brown is such a repulsive looking man. He is absolutely sickening looking. Those liver-red lips. He should never have had his teeth bleached. He looks like a 1920s movie of Dracula.

surely Gordon's spinners spoon-fed him this one. pro-Trident replacement? excellent - won't offend the Right of Centre voters that the Labour Party now sees as its life blood. It will also p*ss off the Campaign Group, which will probably ensue a good back-slapping welcome at the next cabinet meeting.
of course iain you are right it is not a shock that the PM in waiting is playing the party tune especially if it will alienate those bloody hippys/guardian readers. not that he gives a shit at all, but i am one labour member who certainly won't be voting for GB in any leadership election and would require a bag of pegs to put on my nose to vote for him at the next general election. sorry for waffling.

Bit strange to see you even remotely supporting Gordon Brown, Iain ;)
I think it's a bit of a red herring as an argument, in that the only people who are really going to get worked up about it are the hard left, and them taking offence are not going to give the rest of us who are in the Labour Party any sleepless nights..
In any case, it's more of a question of seeing how things develop and it does look like Gordon will bring in a raft of policy reforms when he becomes PM!
Didn't know you were a Blairite Barry's Beef? ;)

Surely this is a case of the wooden Chancellor rehearsing his lines, and trying to tell us that he knows a little about things outside of the Treasury.

There's a lot more reading to do yet Gordon!