Matthew Parris demonstrates again in this morning's Times why he is Britain's best political columnist. He believes that Alan Johnson will succeed Tony Blair, not Gordon Brown. By the end of the article, even I was convinced! He lists nine reasons why Gordon Brown will not inherit... 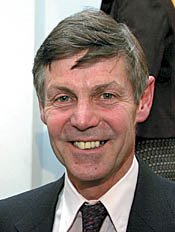 Later in the article he add's a tenth reason: he's not English. To read the full article click HERE.
Posted by Iain Dale at 10:29 am

Most of the nine reasons are different ways of saying the same thing...

Perhaps England really does deserve all it gets?.

What thoroughly annoys me is that they always bring up Gordon Brown and Labour as being gtreat on the economy.

I am not a rich bugger- barely lower middle class and in 1997, I could not spend all my salary...always had some tenners left at the end of the month. Now I am broke on the 4 th day of the month. Labour has wrecked my economy.....too much tax, stealth tax, council tax and petrol have really done it in for me.

Why did he stop at ten reasons?

Essentially it boils down to the problem that Brown thinks of himself as a leader, but no-one wants to follow him.

Parris' opinions are valid but by no means convincing. Plenty of people (not just Brownites) who know him quite well have said things contrary to Parris' views. Blair is a particularly gifted political operator and a man anyone would struggle to follow but it doesn't mean Brown can't manage it. I certainly think the bulk of the Labour party supports Brown so he will succeed Blair, whether he can then convince the British public is another matter.

I am convinced Brown would be nothing of note without his position, Brown is not convincing and he is only in this position because Blair's patronage by keeping him in position for 9 years. Johnson is a credible choice and makes the next election look most interesting, Labour should wake up to that.

"What thoroughly annoys me is that they always bring up Gordon Brown as being great on the economy.

I am not a rich bugger - barely lower middle classand in 1997, I could not spend all my salary....always had some tenners left at the end of the month. Now I am broke on the 4th day of the month. Labour has wrecked MY(my higher case) economy...too much tax ,stealth tax, council tax and petrol have really done it in for me."

Reason No 10, or is it 11: Gordon Brown does not "connect" with the public. This is my favourite word, something politicians must do charismatically and genuinely to get the electorate on their side.

Matthew Parris has missed the key reason Brown won't make it: women find him repulsive. Not just bland or so-so. Not just not-very-interesting. No. Blood and guts, from-the-heart gagh!

Of course, he could lose on his own merits - that he has spitefully wrecked a healthy, powerful economy; that he has turned perfectly normal, self-sufficient families into beggars to get their own money back that he had no sane right to hijack in the first place; that he has created tens of thousands of "jobs" to enlarge Labour's constituency, and on and on.

From a woman's point of view I would add, he looks like every woman/girl's idea of the world's worst blind date. His mouth is disgusting (getting his teeth whitened only highlit the rubbery, uncontrolled context by which they are framed); he looks as though he smells; he churlishly refuses to get "dressed up". (Women don't like men who don't want to posh themselves up sartorially speaking.) He has no interest in charming (just as well, of course). No interest in engaging the interest of anyone else or listening to any voice except his own. He has zero in the way of social graces. In fact, he's in the minus column.

Compare and contrast with the rather likeable Alan Johnson, who sets out to win the interest of his listeners. I'll bet he's flirtatious, too.

Brown's been a stinker of a chancellor and is there, as someone else said, by the patronage of Blair; not merit.

I would love to see Gordon Brown get in. He would be such a pushover for Cameron. But it'll be Alan Johnson, I betcha - and the voters will give him a go. If he gets the Deputy Premiership, we're doomed!

Yes...thanks griswold. I will be delighted to see that on a billboard. Somebody, somewhere should start a campaign of sorts now to keep momentum...and hopefully, we can all feel some finacial security if/when they manage to displace Labour.

Anonymousette makes many good points. In this day and age Brown would not work with the public. Not just his looks, but his mannerisms. The polling already shows that.

But I disagree about one thing. Brown will succeed. It would be unprecedented for enough of the party to get behind any of the other candidates to force a victory for them. I think Blair will continue for at least another 18 months, and then it is Brown. I just wish Dave would do something to motivate the public, instead of trying to banish all our decent candidates.

michael oakshott - I think you may underestimate the revulsion Brown gives rise to in women. He has so much going against him personally. His looks - his face is mean-spirited, humourless, chippy. His personality: grim to non-existent.

Many will take his glum silences not for the churning around of great thoughts, but a complete vacuity. He has absolutely nothing to say.

He's a Scot with an accent which, compounded by the rubbery lips, makes it very difficult to understand what he is saying. He's a fiddly little thinker. Women don't like that either. They like men to have big thoughts and see the overall picture.

Michael Oakshott - Have you ever heard a woman anywhere say she liked Gordon Brown? I am sincerely interested in your answer.

Obviously, I have taken liberties by generalising so grandly, but I think if you ask women - 50% of the voters - you will find they by and large will validate what I have written. (I know, I know. Some won't.)

Add to this that the recent realisation that England, the most powerful and richest nation in the Union, is governed by the natives of a failed state, for the first time, will work against him. They will want to vote for someone English. There goes another tranche.

If Alan Johnson, who has some personality and doesn't look as though he loathes the voters, runs, Gordon Brown is dead meat.

(He didn't get married until he was almost 50. Curious.)

Brown has increased the tax burden, made the UK less competitive with his love of complexity, presided over a disastrous tax credit policy (which he then refused to answer questions in the Commons with, cowardly getting Red Dawn to do it in his stead), and lack of control over increasing spending of taxpayers money

taxcutter - I could drink to that. In fact, I think I will.

The problem is, it takes an ability to concentrate on a subject for more than two minutes to understand all that and I think this is where we find many of today's Labour voters lacking. Those who watch Big Brother and other reality TV programmes may not have the will to put in the two minutes to grasp the issue. Most of these won't vote anyway.

Personally, I want to see Brown get in because he will be such a pushover to get out. God, being represented by the vainglorious, "Look at me! Over here!" variously costumed and accented Tony Blair, was bad enough. But the incompetent, incomprehensible, rubber-lipped Brown ... My cat could beat him with one paw tied behind his back. (Not that I would ever tie a cat's paw behind its back, as that's cruel.) Which ... hmmm ... gives rise to the question, is the Brown household another household, like the Blairs, with no pets?

A bit unfair towards Brown but I comfort myself in the knowledge that it's OMOV within my party and when a vacancy occurs, who leads this country and DPM will be decided by....me.

Brown has doubled NHS spending, eradicated Tory unemployment to nil,removed the working man from poverty and doubled pensioners intake. 1Million children are raised out of Tory poverty.
And you put Georgy Osborne in with this Rhottwheiller!!
Georgy, to his credit had one policy. 'Flat tax'.He's been slapped down and told to be a good boy.
I feel sorry for you Tories. A new leader and new policies will win it for Labour.
PS, even here in the peoples republic of Stoke in rebellion, can't find anyone who's voting Gordon.
Gary