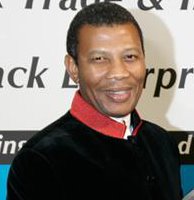 Wilfred Emmanuel-Jones, Britain's only black farmer, and a member of the Tory 'A' List has just been selected as Tory candidate for Chippenham. He beat off a strong challenge from fellow 'A' Lister Harriett Baldwin and a local candidate.

I met Wilfred at the 2003 Party Conference when he was mulling over whether to apply to be a candidate. What a nice guy. I am genuinely delighted for him. He'll have quite a media storm to deal with now, so I hope he knows what's coming. I hope that his selection will finally lay to rest the myth that ethnic minority candidates can't be selected by Tory Associations in safe seats. His selection follows Adam Afriyie in Windsor and Shailesh Vara in Cambridgeshire. Ok, that's only 3, but it's three more than the LibDems have got, and three more than many Tories would have expected only a few years ago. There's a good feature on Wilfred in the Sunday Times HERE.

As any farmer could tell you Iain, don't count your chickens. Chippenham isn't a Tory seat - it's a new seat - and on paper it looks like a potential Lib Dem gain.

Lets hope one day to be Britain's only black, former-farming, Conservative MP!

Chippenham is a notional LD seat according Wells' figures, so I find difficult to describe it as a safe seat, more a target seat.

(ii) The Lib Dems don't have any safe seats AFAIK

Andrea, well if that's the case, it makes my point even more strongly, doesn't it?

And Inamicus, I just have trhe feeling that we won;t be hearing the words LibDem and gain in the same sentence that often at the next election. But of course, it is 3 years away, so I mustn't get carried away...

Judging from the figures for the two seats it is taking wards from, it looks like it should be one of ours come the Day of Reckoning. Anyway, congrats to Wilfred for stepping up to the plate (or, going in to bat..) and congrats to the constituency for choosing someone who doesn't come from central casting.

Iain, to be fair the only time we've heard "Lib Dem Gain" in anything like large numbers was in 1997. It makes it all the sweeter when it happens :-)

As it is certainly a notional Lib Dem seat it would not be a Lib Dem gain . It should be noted that Baxter's notional figures are well out 5,000 Conservative majority which is a reflection on his poor method of calculation in this and other seats .

The candidate selected there is probably sure to become an MP...even if he/she is caught in a 3 in bed with Oaten and a pink hyppo on election day.

Chippenham is marginally lib dem by about 1500 votes. Should be an achievable seat for the tories. Good luck to him.

Well, he has a nice face and as he's been selected, I wish him well. But I hope he's not being run as a minority, or ethnic candidate. That is left wing toxic garbage. Did any Jewish MP ever get pushed as a 'minority' or 'ethnic' candidate? I think not. They all won/win on their merits as individuals.

I hope the gentleman is running as a British farmer. End of story.

He's also sound. He's a farmer who understands hunting with hounds. That means he opposes the sledgehammer of legislative bans that do no conceivable good and hurt hundreds of thousands of people for reasons of class-war, political spite or Disneyland morality. Even if that gives trendy wet factions the wobbles and offends that shrill right wing bigot Widdecombe, you don't get much sounder than that

Can the Lib Dems be trusted not to play any "Hughes - the straight choice" type tricks ? I can remeber John Taylor and Cheltenham.

I'm just glad that the Conservatives are proving with Afriyie & Vara that you don't need someone to share your skin colour to represent you.

Labour MPs who are ethnic minorities can only win with the support of the Black or Asian vote.

We are the only party that can prevent the country from being balkanised and turned into ghettoes where you have to look like everyone else around you to get on and succeed.

I am glad of this. It is infuriating that many young black kids think socialism is the best solution because the party of the socialists is the only one that lets them get ahead.

I believe the LDs referred to their candidate in Cheltenham (Nigel Jones) as 'local'. Well, he was (and a longstanding one), but cynical souls wondered if that was entirely what they were getting at.

That said, the Tories might have lost Cheltenham anyway, when the Liberals had run down the majority through pavement politics (plus the urbane Richard Holmes as their candidate), and the well-regarded Charles Irving had retired (taking a considerable personal vote with him).

I don't think I've ever seen a Lib Dem leaflet that didn't refer to the candidate as local! Tory sour grapes over their own self-destruction: just like in Falmouth in 2005

How do you know he is the only Black farmer in Britain?

Let me say this again
Wilfred has never farmed a day in his life, he is a marketing man, apparently a very shrewd one, but a marketing man none the less, ie a bullshit merchant,
having said that I much prefer the idea of somebody with some nowse being an MP to 90% of the dross we currently have to endure, and his sausages are not so bad,I just hate BS, so good luck Wilfred.

Noorderling - I think it is just what the man himself claims and nobody has come forward to claim otherwise.

I personally cannot see him winning. The Lib Dem is likely to be Duncan Hames who got a decent result in the marginal predecessor Westbury seat in May. The seat splits on broadly partisan lines with the sitting MP wisely hanging on to the blue parts and Hames taking the gold.

Who gives a stuff if he's black brown or sky blue pink? Surely what matters is whether he will be the best representative of his constituents by voicing their concerns and giving the executive a damned good kicking whenever they deserve it (regardless of which party is in office).

If a candidate's race, gender or sexual orientation gives some extra bennies beyond that initial consideration, great. But to make the fact that this guy is black the main plank of his candidacy would be nothing but shallow, gesture politics of the sort with which we have become all too familiar from the socialists.