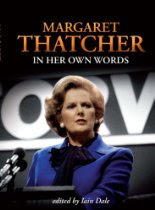 Anyone who has ever had a book published will know how I feel right now. It's how I imagine a parent feels after seeing their new baby for the first time. Half an hour ago the first copies of my new book, MARGARET THATCHER: IN HER OWN WORDS arrived at the office from the printers. It's beautifully produced and very chunky considering the relatively low price. And a lovely smooth feeling cover.
It's timed to be published to coincide with the imminent twentieth anniversary of Lady T's fall from power, which will no doubt get a lot of coverage in the media.
The book has had a very high level of pre-orders and Waterstone's are going to promote it in amost of their stores.
Next week I'll also get copies of the 3 CD box set which accompanies the book.
Order the book HERE.
Order the CD Box Set HERE.
Posted by Iain Dale at 11:23 am

Looking forward to the book, but I'm disappointed its not available on Kindle or for iBooks!

Iain, while I’m very happy for you, what sort of a dinosaur reads a physical book these day?

You need to publish this in epub format. Then offer a direct download from your diary, or at least your publishing company website. At a discount to reflect electronic distribution cost, about a third to half off; or whatever distribution costs you.

Then I can download to my Sony PRS-650 and read where-ever and when-ever.

Really sorry, but for copyright reasns we can't do this as an e-book at the moment. I hope this will change.

"And a lovely smooth feeling cover."

Well in that case, sign me up for three copies...

MM, feels chunky and smooth. Makes me think of a Yorkie bar.
Congratulations Iain, I'm sure it will be excellent.

KingBingo...sorry to throw stones into your technological infested pond but millions of us like to relax with a good book, glass of wine etc...the thought of doing it your way would horrify most people....by the way what the hell is a Sony PRS -650 when its at home?????????....

since buying kindle a couple of months ago I've mostly given up on "physical" books. So please can it be made available electronically?

I don't know what your copyright issues are but you might like to look at sorting them.

Similarly what about a down-loadable version of the audio. I've run out of space at home so only really do downloads rather than purchasing CDs.

"what sort of a dinosaur reads a physical book these day?"

Uummm I would say the VAST MAJORITY?

Margaret Thatcher - far and away the greatest ever peace time PM this country will ever see. Without her, Britain would be a third world country.

Will there be a hardcover version? I would love to get this as Christmas present for a friend