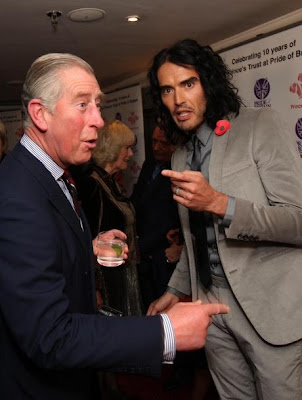 In the two-speech-balloons-as-one style of Private Eye...

Russell:" Aren't you that guy who said all those nasty things about someone's daughter in the media?"

Charles:"*cough* that was a long time ago now. Where's Katie tonight? I wanted to look up her skirt to see if she had any knickers on?"

Russell:"She didn't come tonight because she knew you were going to be here."

Finally the Bad Taste Competition entrants were whittled down to two.

"and you think I'M a talentless waste of air?"

My wife's tits droop all the way down to here...

Both: I'm with stupid!