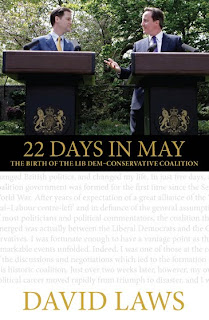 In the endpiece to his forthcoming book, the Lib Dem MP David Laws will call for
the coalition's ambitions to span a decade in power. That is tantamount to
saying that some sort of election deal must be done, and the closest any Lib Dem
parliamentarian has come to echoing the backing of the Tory MP Nick Boles for
the same thing.

I don't know where this has come from, but as the publisher of the book, can I categorically state that David Laws says no such thing, either in the endpiece, or elsewhere in the book.

David's book, 22 DAYS IN MAY will be published on 22 November and will be serialised this weekend. You can preorder it HERE.

Rob Wilson's book 5 DAYS TO POWER: THE JOURNEY TO COALITION BRITAIN is also out on 22 November and can be preordered HERE. 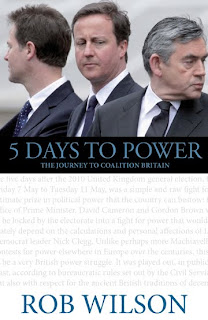 So shouldn't Glover be making a correction?

but where are the kindle versions?

would be interesting to know the issues around kindle publishing?

Both will be available on Amazon shortly as e-books.

Hopefully you won't follow the other publishers moves in pricing the e-book editions above that of the hard copy editions.

People are asking Julian Glover on the article comments to clarify. Pound to a penny this is not as clear cut as Iain Dale says it is.

DL, you really do dislike me, don't you?

How can I be clearer? I spoke to JG who said "he was told" it was in the endpiece. As the publisher I can state that it is not. And never has been.

Perhaps you would care to justify your allegation?

Isn't this a fairly straightforward piece of over-interpretation by Glover? For Laws to say that the coalition's ambitions should span a decade in power is NOT necessarily tantamount to saying that some sort of pre-election deal must be done. He could just be saying that if the next election were to produce a similar result to the last one, he would like to see the coalition continue for another Parliament, which, from Laws, is really no great surprise.

Lit, most certainly not. I think the e-edition will be about half the price of the printed edition.

What a really silly response. Surely it's either in the book or it isn't and the easy way to verify that would be to read it ( or in your case have someone read it to you)

I don't like it when you make stuff up, as with the Woolas/Bercow piece. Given that you do that in some places, it's natural to assume you do it elsewhere.

I have no idea what you are talking about. I have made nothing up re Bercw/Woolas.

You are well on the way to getting yourself banned. It is you who is making things up and I won't stand for it much longer.

Do not ban him Iain, you will just be playing into his hands by making him into a martyr amongst his small band of poor deluded fools.You will deprive us of a figure of fun.

"Preorder"? You mean Order of course, or did they get to you too Iain?!

Despairing Liberal is evidence in support of the claim that "Leftism" is not a theory but a psychological state. Imagine waking up each morning and being him.

I would pity him but like other sanctimonious "Leftists" he seeks to give meaning to his sour hatreds by hoping to impose them upon everybody else.

What a disappointment for him and his fellow Leftists that the Labour Party is not back in power. Never mind. In his next life maybe he will come back as a beautiful rose.

I look forward to reading the retraction. I assume that the Guardian is not interested in simply feeding the insane anti-Lib Dem rantings of its Labour readers.

Laws should be up before the beak not profiting from books.

AWESOME photo on the front of "5 days to power." Summed it up so well - whilst leaving some intrigue, that it took my breath away!