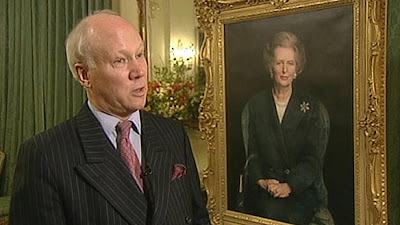 It was nice to see Margaret Thatcher back in her natural habitat this afternoon - 10 Downing Street. She was attending the unveiling of an official portrait of her by the superb artist, Richard Stone. I have met Richard before, and indeed have one of his previous paintings of Lady T on my dining room wall. He has captured her brilliantly.

My informant at the event in Downing Street this afternoon tells me that about 60 people were present. Gordon Brown made a very warm speech paying tribute to Lady Thatcher and her time as Prime Minister. "You were a great leader and I want to thank you for the great service you gave to our country," he said. The event took place in the Pillared Room in Number Ten. Brown said he had asked Lady T what had changed since her time. She said the upholsetery used to be red and now it was green. Brown said he was very surprised there had been anything red in Downing Street in the 1980s. He quoted John Ruskin who said that great historical figures are judged by their deeds, words and art. Lady Thatcher had already fulfilled the first two criteria, he said, and now it was time for the third. As the portrait was being unveiled, Lady Thatcher remarked "Thank you very much. I like it." Brown himself led the applause.

No cameras or press were allowed, apart from an official photographer. I assume pictures will appear on the Downing Street website shortly. Among the guests were David Cameron, Bernard Ingham, Michael Forsyth, Will Lewis, John Whittingdale, Lord McAlpine, Maurice Saatchi, Kelvin MacKenzie and Tim Bell.

Some of the guests were heard joking about holding Gordon Brown hostage and launching a coup there and then. It would not have been difficult. Brown was the only Labour supporter in the room.

UPDATE: Ben Brogan, who was present, has an account of the event on his BLOG.
Posted by Iain Dale at 3:14 pm

One hopes that Gordon Brown's 'warm speech' paying tribute to Lady Thatcher, "You were a great leader and I want to thank you for the great service you gave to our country" may be noted by at least a few of the lefty nutters in his own party who still espouse visceral hatred for the good lady and her works. Much chance? Probably not. Too busy still making fashionable socialist obeisance to the likes of Marx, Stalin or Che Guevara.

Keep it up trolls!

Labour gaining all the more as you & The Sun travail to the public's general disgust . . . .

Your post is vile, ignorant and deeply offensive. I am surprised that Iain has tolerated its presence on his blog. It seems from your use of language that you might urgently be in the need of treatment if you are not already under psychiatric care. When will you people realise that to descend to abuse like this does nothing for any political case that you might be fit to make? It your case, though, “fit” probably doesn’t apply…

"You were a great leader and I want to thank you for the great service you gave to our country," - when the sad day arives it wil no doubt be worth quoting those words at the labour ants who will come out from under their stones.

In view of 'climategate' it cannot come too soon.

I do most sincerely wish that we had her back....Compared to what we have had since, hers were halcyon days.

I think he was looking for a new job next year.

I've seen quite a bit of Richard Stone's work and had the pleasure of meeting him on a number of occasions. He's a quiet, charming man whose unassuming demeanour doesn't give any hint of the extraordinary talent that he possesses.

What's remarkable is that Richard Stone is an entirely self-taught artist. Not bad going for a man who's probably been commissioned for more royal portraints than anyone else!

Bet he turned the face to the wall later

4m unemployed as they deflated going into their first recession?

Refusing to diversify our reserves as Gold pretty much froze longterm.

You can tell we're approaching an election - quietzapple is omnipresent.