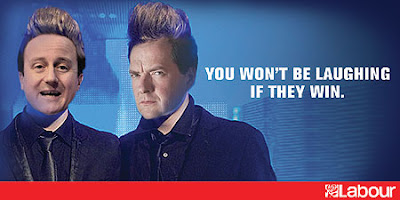 The Mirror resports that Labour is about to commence an advertising campaign depicting George Osborne and David Cameron as John & Edward from X-Factor. It's actually quite an amusing poster, but it's also interesting in that it acknowledges that the Conservatives are heading for a victory.

But I doubt very much if Labour is launching any such campaign, mainly because they can't afford to. No political party worth its salt spends any money on poster campaigns any longer. They don't need to because the marketing can be done virally, for free.

Now, here's a challenge to my readers: Think of a famous double act who bear a similarity to Gordon Brown and Peter Mandelson. Photoshop it into a poster and email it to me. I will post the best of them. 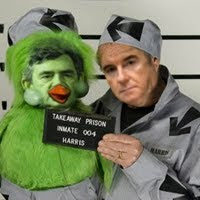 And from An Englishman's Castle 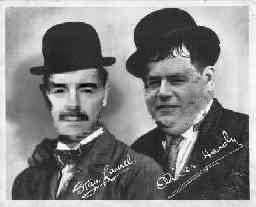 And from Liam Murray... 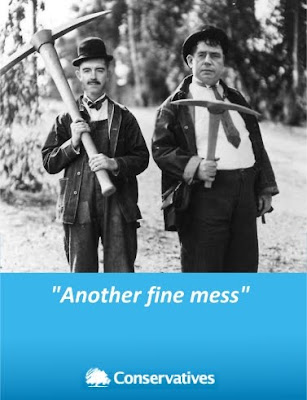 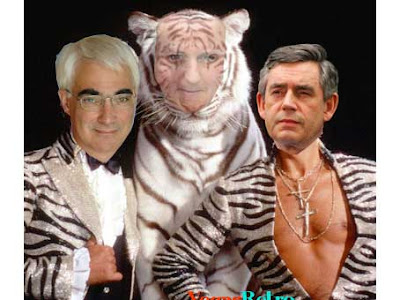 don't have photoshop.....but can't help thinking of Laurel and Hardy - altho the faces would be those of Brown and Darling.

not Brown/Mandelson but Brown/Darling....got to be Laurel and Hardy. Don't have photoshop tho

OK, how do we show images?

And in a related topic, can anyone beat this Private Eye copy?

How pathetic that Labour indulges in the media's ritual bullying of these two teenagers - talentless though they may be, they undeniably work hard at what they do. What sort of message does this send out to young people? Who's the nasty party now?

Heh Labour are nicking my lines! I compared Cameron to Jedward last week in the comments here, under the Louis Walsh quote you had at the weekend.

Do not have photoshop. But Peter Sellers in the Pink panther movies with his chinese batman.

bit of a spoiler for my greer homage unfortunately ...

but I'll press on with it

No photoshop I am afraid, but Dougal and Brian from the Magic Roundabout. One is a bumbling error prone idiot and the other is a slimy snail.

Mandelson as Laurel and Gordon as Hardy and he is screaming at Laurel/Mandelson "Here's another fine mess you've gotten us into."

Actually, the roles are interchangable. It still works if Mandelson is Hardy..

Unbeknownst to many Dougal is actually a Maltese Terrier, he has two bad habits; turning around in circles and an addiction to sugar cubes. He considers himself to be the brains in the garden, is arrogant, appallingly rude

Brian is the real brains of the outfit. Mostly affable he has been known to lose his temper

Abbot and Costello?
Dracula and Wolfman?
Pozzo and Lucky?
Cheech and Chong?

Guess you've not seen that the poster is splashed on the front page of their website then?

Of course, it's still possible Labour might win. But a double victory - Labour AND Jedward - I think I'd lose the will to live...

You can do most of what photoshop can do with GIMP
http://gimp-win.sourceforge.net/stable.html

I can't think of a double act, but I have concocted one, that seems to fit

Had to have a colleague explain it.

So the dumbing down is complete. At least with Michael Howard they referenced Dickens.

What next? Ennobling a TV personality and making him a business Tsar?

Just tried to email you, Iain, but I get an error from blogger.com

Titus, why would you try to email me through blogger?!

But people are actually voting for 'jedwrd'.

Generally a 'poster' campaign consists of a party leader standing in front od one poster while it is unveiled. And thats it.

No doubt labour loonies can email each other with copies of the Mirrors effort to keep themselves amused. But given that labour have given us a 180 billion deficit (this year AND next) and 60 billion debt interest repayment bill, the logic of this accusation hardly bares close inspection.

'Abbott and Costello' would be my double act of choice for Brown and whoever.

If we were to stick to an X Factor theme, with a symbolic comment upon how a change of Chancellor has had no effect on the economy being wrecked, how about portraying Brown and Darling as Same Difference?

(I have just blogged on this from a different angle: can anyone think of a previous winner of the series with whom to compare the PM alone?)

All those parents about to lose theit child care vouchers can no doubt make up their own minds about the alleged posters logic. As can those still out of pocket from the 10p fiasco.

And of course we must keep reminding people that even through the 'good' years of growth brown has always posted deficits from the moment he stopped following Tory spending plans.

Does anyone doubt our future prospects under Labour.

with apologies to Derek Draper's wife.

Can't photoshop but you could do one of Sooty and Sweep with a caricature of The EU with its hand up their arses.

Surely it has to be a ventriloquist with his dummy? Can't decide which pair though.

Another PR triumph for Labour when Jedward win it.

Brookes in the Times did it much better yesterday anyways.

How about Gordon Brown being depicted as a pathetic weeping emaciated creature, with the caption:

How about Mutt and Jeff? A good pic to photo copy can be found Here

Dont forget to include Kevin Maguire, the main man from this useless S**t Rag

You have no worthwhile policy to talk about so you descend to the dismal level of the Socialists ....

My God ... what a choice. No wonder the turnout in Glasgow was so abysmal.