UKIP Gets a New Leader 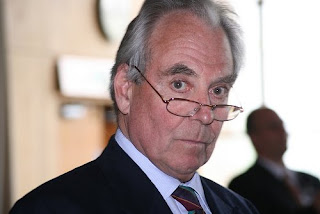 News has just broken that Lord Pearson has been elected leader of the UK Independence Party, succeeding the buccaneering Nigel Farage. Malcolm Pearson only joined UKIP a few years ago, having been a leading light (and donor) in the Conservative Party for many years.

He was clearly the most talented of the five contenders for the position (not difficult), but he has a very hard act to follow. Nigel Farage was a terrific leader for UKIP and gave them a profile they never had before. He certainly suffered setbacks along the way, but UKIP has many reasons to be grateful to him - not least that they still exist.

Farage now has the time to concentrate on his campaign to oust John Bercow from Buckingham at the next election, and I don't expect his media profile to diminish very much. If anything, freed from the shackles of office, he may actually become even more prominent.

But Lord Pearson is a powerful advocate and isn't shy himself in the media stakes. He hasn't got the man of the people appeal of Farage, but it will be interesting to see what the media makes of him. I can't say I wish him luck, but he is a fundamentally good man and it's always good to see decent people rise to the top of political parties, even when you disagree with them.
Posted by Iain Dale at 3:12 pm

The best choice. I suspect he will consider UKIP's internal workings considerably. Have of course blogged about this myself.

UKIP's problem is that, until Farage comes back as leader (and he must do), they don't have anyone elected that's remotely capable of taking on the post. Pearson was indeed the only credible candidate, but, boy, does it make it harder for him to make the democratic deficit case.

"a leader that has never been elected" says keeprightonline

the party members have just elected him, he is leading a political party in this country....and is not being foisted on anyone as a major decision maker in the EU.

"There you go again" - wishing people well who despise you.

I have just blogged about the dangerous implications this has. Can Pearson not see how his calls for a hung parliament run the real risk of ushering in another era of Labour in some capacity or other? Either he's playing political Russian roulette, or he is able to predict election results with an accuracy unavailable to us mere mortals...

Farage has resigned at a bad time, cosidering General Election soon, this does not look like a good decision for UKIP, the reason does not add up?

He looks really, really familiar in that photo....

However sterling (so to speak) may be the work that Lord Pearson does on learning disabilities and as Chairman of the Deerstalking Committee of the Countryside Alliance, the fact remains that he is a close friend and ally of Margaret Thatcher, with all that that entails.

But half of the UKIP vote for Strasbourg, based on its geographical distribution, must be Old Labour or (especially in the West Country) Old Liberal rather than Old Tory. Add together the Tory and UKIP votes in Wales, London, the South West, either of the Midland regions, or any of the Northern regions, and you get an absurdly high figure for the number of natural Tories living there.

Those voters stand in the tradition of the Attlee Government, which refused to join the European Coal and Steel Community on the grounds that it was “the blueprint for a federal state” which “the Durham miners would never wear”. In that tradition, Gaitskell rejected European federalism as “the end of a thousand years of history” and liable to destroy the Commonwealth.

Half of the French Socialist Party successfully opposed the EU Constitution. And the No2EU – Yes To Democracy list at the 2009 European Elections included in London Peter Shore’s erstwhile agent.

Some of us would wish to vote for such candidates. Whom we are therefore going to have to be.

The Political classes should start to worry as their stranglehold will be weakened by direct democracy plus a full range of polices:

A blog on the loony British Democracy Forum
says
"we in the BNP are backing Lord Pearson all the way"
"a dual strategy in play here, UKIP taking on the Tories and the BNP taking on the Labour party."
Apparently both parties - UKIP/BNP - believe in 'morality'.
http://www.democracyforum.co.uk/ukip-leadership-election/68388-why-bnp-backs-lord-pearson.html
(why you would actually want to go there defeats me)

The paucity of people and credibility in UKIP, such that it has to elect a 67-year old peer as leader speaks volumes.
his Lordship had an unfortunate experience on the operating theatre and received a visit from God. God is sad because he is losing the battle between good and evil. Lets hope May 6th proves Him wrong and that the latest unholy (albeit possibly involuntary) alliance between the BNP and UKIP receives its just deserts.

Not really bothered who he is, as long as it frees Farrage up to get himself into Westminster, the added bonus being we would be rid of the turncoat Bercow..

Dungeekin beat me to it.

And Mr Benitez is really Ian Anderson from Jethro Tull.

I have just blogged about the dangerous implications this has. Can Pearson not see how his calls for a hung parliament run the real risk of ushering in another era of Labour in some capacity or other? Either he's playing political Russian roulette, or he is able to predict election results with an accuracy unavailable to us mere mortals..."

If UKIP are a threat to the Tories regarding splitting the vote then the Tories need to up their game, not use the threat of labour as a reason for no one to run against them.

If we get a hung parliament it will be because "Call me Dave" blew it and didn't do enough to convince the voters he wasn't just more of the same.

"But Lord Pearson is a powerful advocate......"

Having just watched Lord Pearson being interviewed on Channel 4 News, I would say that this is a very generous assessment! He lacked fluency and more importantly the ability, requisite in any politician, of turning an unwelcome question to his advantage. The bumbling and disjointed response to a question on his assertion that “Muslims are breeding ten times faster than us" was weak and lacked conviction.

So Loudmouth stood down and he wants to wrest the seat from Berkow, one of the safest Tory seats. That should not bother Tories as Berkow has no votes and Farage is a mere Loudmouth. I can't see him win. He can rant and rave in Parliament if he wins. Tories should not fall into the trap set by Lisbon Treaty desperados who will be shouting until the cows come home. It is a lost cause and we should move on.

The only person to say - 'Call me ...' was Brown who said to cabinet colleagues 'Call me Gordon"

KeepRightOnline said that Lord Pearson is "a leader that(sic) has never been elected". What utter nonsense! The whole point of this blog is to celebrate the ELECTION of a leader who obtained 48% of the votes cast - far better than most other politicians could claim. It should also be remembered that the candidates in this election were not palmed off on an unwilling electorate by party leaders as seems to be happening in other parties I could name.

This democratic deficit stuff is nonsense.

UKIP don't currently have any MP's so they can't have an MP lead the Westminster party.

Pearson has been democratically elected by the party .

I am sorely tempted to help Nigel Farrage oust that chump Bercow .

If all UKIP candidates stood down, apart for Farage in Buckingham, they could lay claim to a strategy. Maybe Pearson could address the issue of strategy.

How will blocking Conservative eurosceptic MPs from Westminster without winning a single seat help to get Britain out of the EU? If UKIP focused on winning just a single seat for Farage at Westminster, the party could claim that it has some some kind of strategy.

During the 2004 Euro election UKIP received a massive boost in membership with membership increasing to 26,000.

During the 2009 Euro Elections and afterwards UKIP membership has declined yet further from 14,600 to 13,400 so they received no boost and no additional income.

This would appear to indicate that most of UKIPs boost was down to anger at the MP expenses row and nothing to do with their campaign.

These are the membership figures for UKIP:-


The BBC had turnout for the UKIP leadership election as 74%, which would put the party membership at 13,439.

@archie
"The bumbling and disjointed response to a question on his assertion that “Muslims are breeding ten times faster than us" was weak and lacked conviction".

I thought he was refreshingly honest and spin free, unlike the slick Cast Iron Dave, Teflon Tony and Perfunctory Brown.

With absolutely no understanding even of his own base, no more than half of which is so much as ancestrally Tory, Lord Pearson sounds the death knell for UKIP.

Just as Plaid Cymru has only ever been a pressure group for lavish central government spending on, and other privileges for, the Welsh language; just as the SNP is now only a pressure group for ever-higher central government spending in Scotland; and just as even Sinn Fein is now nothing more than a pressure group for the maintenance of a highly localised theme park of Gaelic-Irish Republicanism at the British taxpayer’s expense; so UKIP has become nothing more than a pressure group for the party of the Treaty of Rome, the Single European Act, the Maastricht Treaty, and 18 continuous years of three line whips in favour of the Common Agricultural and Fisheries Policies, to renounce the whole of its own history on the Eurofederalist issue, including the Prime Minister to whose historically baseless cult the remnant activist body and core vote are utterly devoted.

Those of us who stand in the tradition of most of those MPs who voted against the Treaty of Rome, the Single European Act, the Maastricht Treaty, and the annual renewals of the CAP and CFP (whatever happened to those yearly votes?), are now going to have to make our own arrangements. We include half of those who have hitherto voted for UKIP at European Elections, the Elections at which UKIP has hitherto done best.

Duncan-Smith was "refreshingly spin free" too we were spun (ironically) but it turned out he was just useless, wrong and unpalatable

So presumably Pearson is going to have to run for a seat to have any credibility as a leader in the GE.

Can I suggest Barking? It would unarguably set clear red, white and blue water between UKIP and the BNP for those of us who find them a little blurrily indistinguishable sometimes.

It'd be barking in Barking.

Some UKIPPers might suggest you reconsider your descriptions of Farrage - "man of the people" and Pearson "talented" in view of their cack handed handling of their smoke filled room style attempts to stitch up a deal with Chameleon re a referendum and disolution of their party.

I gather they disagree as to what was on offer, so 'cack handed' is a bit of an understatement surely?