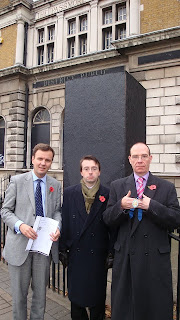 On November 10th 1919, Clement Attlee was elected Mayor of the Borough of Stepney; the first public office he held in a career that led him to 10 Downing Street. In 1922 he was elected MP for Stepney, Limehouse.

For nearly 100 years Limehouse Library served the local people, until closed by Labour Tower Hamlets. In 1988 statue of Clem Attlee, in front of the Library, was unveiled by Harold Wilson.

For over four years the statue of Clement Attlee has effectively been placed in a box, and left in front of the abandoned Library.

Two years ago, Labour promised to do something about this, but nothing has happened.

Yesterday, the ninetieth anniversary of Clement Attlee's election as Mayor (he was neither a councillor or Alderman at the meting, becoming an Alderman during 1920), local Conservatives protested at this neglect by Labour of the most important political figure ever to come from Tower Hamlets.

The present Lord Attlee, who was unable to attend, said how shameful that the statue of Labour's greatest ever leader is left neglected, in front of a derelict building close to the spot where he began his career (note in 1919 Clement Attlee lived in this part of the Commercial Road).
Posted by Iain Dale at 12:25 pm

Should be fun to watch the spin back on this. Just shows how little respect the left and the labour party in general has for not only the tradition of this country but those who have served it.

It's unsurprising that Labour have not 'recognised' this important date . . . but to be fair; I doubt very much whether Attlee would recognise the Labour Party these days.

Iain, are you really saying that Atlee was a great man who should be honoured?

The man who oversaw the pissing away of the Marshall Plan aid money, the creation of the monstrosity that is the NHS, and nationalised the railways, the mines and goodness knows whatever else?

Only the churlish would deny that the Attlee government made many important and valuable reforms. However, it set the UK on the path of a quasi planned economy that led to the near collapse of the 1970's. The fact that the succeeding Conservatives did little to reverse that course does not alter the fault of those who set it. By the 1970's the UK public sector of the economy was similar in share to the DDR, that is how bad it was and there was no "Bundesrepublik" to bale us out!

Same with the Iron duke. The Liberals left his statue floating around London before packing him off to Aldershot in 1883.
Recently restored by conservation groups.

Nelson, the hero of 1805 gets a whole square. Poor Wellington..

I am surprised that Clem's son has not made a comment or turned up for the pic. This present Government is a million miles away from what Attlee represented and attempted.

In '45 Attlee took over a bust economy with a multitude of expensive foreign commitments, and with a manifesto package that was always going to be costly and already out of date. Also, much of the UK infrastructure was in a bad state. When I saw him speak, contrary to beliefs, he was very effective. He was not good however on film or radio. He was always on a loser.

Do you think that gordon will ever get a statue ?

"Bill Quango
Nelson, the hero of 1805 gets a whole square. Poor Wellington.."

They named a boot and a bomber after him, didn't they?

The Statue should be taken to Waltham Forest and placed in the Municipal Gardens in the Town hall.

Waltham Forest Town Hall is in Walthamstow which was Atlee's parliamentary seat, was it not?

They would certainly honour that statue and the memory of a statesman.

Apparantly there are plans afoot to have a statue of our bravest and best Prime Minister, Gordon Brown, placed on the fourth plinth in Trafalgar Square. His amorial bearings (Two crossed fountain pens upon parchment, with lions on either side of the pens, underneath the all seeing eye)will be displayed in full colour and Brown will be wearing the uniform of a Field Marshall in The Black Watch. An addendum to the minutes states that the statue will be enclosed in a black box. Having read this post I now understand that addendum.

Iain, I used to live in Fulham and I'm sure that on the estate there was a pub called the Clement Attlee. I've just ried to google it - to no avail.

It would be ironic if Labour's smoking ban forced it to close.

I vote Tory and have done this since 1979. In my opinion, Atlee is a great man, teamed with Churchill with Bevin to defeat Hitler. There was nothing wrong in the formation of NHS in that postwar period with wounded soldiers back home and the country totally banrupt after the war. Free healthcare was critical. The BMA held gun on the minsters heads and worked out a cosy arrangement for their members (GPs) in the primary care. This NHS model should have been abandoned in favour of the models the continental countries came up with later. Atlee was responsible for the start of de-colonisation by giving India the independence ( The partition in the subcontinent is arguable). But he does not deserve this insults. Afterall, we have statues of Mandela everywhere in London. Wonder what he has done. That is labour's priority-black votes. As for Atlee, Labour has no use for this man.

Lexander said...
I am surprised that Clem's son has not made a comment or turned up for the pic. This present Government is a million miles away from what Attlee represented and attempted.

Clem's son is dead. Clem's grandson, John, is the current Earl Attlee. Labour's forgetfulness might be down to the fact that John is a Tory Peer.

"Labour's greatest ever leader is left neglected, in front of a derelict building close to the spot where he began his career"

I seriously don't get the obsession the tories have with aping labour's ideas, rhetoric and now even heritage. I for one do not want any of these things.

"New" Labour, in particular one A Blair, has no sense of history or what it can teach us, witness its destruction of history teaching in our schools.

Attlee belongs in the days when you might have disagreed with Labour's world view, but you didn't doubt the conviction and - dare I say it - honour of many of its adherents.

This is a great post - I used to be Labour Constituency Secretary of Poplar and Canning Town and I have to admit some sadness at the way some good Labour people are just side-lined.

This was taken from a Newham Labour blog and I think it sums up the mood of a good deal of Labour activists:

Disillusioned Labour member said...
John - I am another party member and we don't have a selection process that is either fair or democratic. Wards have still not seen a list but we do know that some councillors have been deselected for spurious reasons and with no branch consultation. Others have been forced to stand down by rumour and innuendo, and some who aspire to be councillors have not made the list for again spurious reasons. Regional office refuses to investigate, probably because they have even bigger problems in Tower Hamlets. Democracy does not exist in Newham, and the council is run by the patronage of one man. Show a little honesty in your blog and start to help get Labour back to the honest party it once was locally.


If the National Party give Conservative candidates some REAL assistance in the forthcoming locals in Newham and Tower Hamlets there are seats to be won.

Do this in such staunch Labour areas (especially Newham) and you really have something to crow about!

Crush the statue, melt it down, do anything but unveil again an image of the disastrous Attlee, leader of (still) the greatest bunch of collectivist thieves in our history.

For thirty five years our people suffered under his socialist legacy. May God damn him.