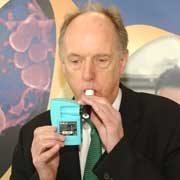 Remember Tony Banks got into terrible trouble by saying he hated dealing with is constituents? Well Norwich North MP Dr Ian Gibson has gone one stage further and called his constituents 'Inbreds'. Mind you, judging from his picture you might be forgiven for thinking that Dr Gibson's family tree doesn't fork too often...

The full story from today's Eastern Daily Press (read my column tomorrow!) is HERE. Dr Gibson thinks that Norfolk's higher than average rates of diabetes among children is the result of too much inbreeding. Might I be wrong in thinking that Gibson might just have decided not stand at the next election and is a little demob happy?

Doctors in Norfolk write 'NFN' on the files of patients resembling the people he describes: 'Normal for Norfolk'.

Yokel Girl: Well, what'm botherin' oi is this. If'n we go an' get divorced loik them people on the telly does all the toim. Will oi still be your sister?

(apologies for the accent - I do Peter Sellers Indian much better)

Having studied under Ian Gibson at UEA, in his course on genetics and cancer and stuff (it had the catchy title of "Genes in Action"), I can confirm there's a higher-than-normal incidence on congenital disorders in Norfolk. (And yeah, they do write NFN too, from what several doctor and nurse friends in East Anglia have told me).

Yeah, he's a PhD, not a GP, though. He was Dean of Biological Sciences at UEA before he was elected in the 1997 landslide. Nice bloke.

Iain, a bit rich, seeing you are complaining about improving the transport links into that part of the country ensuring the situation is not going to improve..

Imagine if Dr Gibson has said this about a race, religion or political group - rather than a geographical location. The people of Norfolk deserve better than Gibson - he should go away, grow up and come back when he's got somethink positive to contribute to the development of the county.

Inbreeding in Norfolk and Suffolk has been endemic for generations. A similar situation prevailed in the Forest of Dean, where incest was for many years "normal". It was understood that where Mother was ill or unwilling, the eldest daughter took on Father. No-one thought anything of it.

Can't see why in-breeding in Norfolk is even considered news.

Further to my comment at 10.00pm, it may be that topography influences the parochialism and insularity of the people. These issues were eloquently explored, in the case of Suffolk, by Ronald Blythe's book "Akenfield".

I deplore Antony's illiterate comment, which shows a worrying superficiality.

I deplore people who don't post under their real names.

You are also quite bizarre and should be shut away for a while to consider your remarks.

I went to a wedding in Norfolk once.
Everyone sat on the same side of the church!

According to the charity Rethink (Press Release 1 March 2006 "Norwich has:

More anti-depressants prescribed than anywhere else in Central or Eastern England.
Traditionally had a higher suicide rate than the national average.
Had over 3,000 mental health related admissions between 1998-2003
Has an “unenviable position as a centre of high rates of self harm.”"

I've got a friend in Norfolk anyway he and his wife, cousin, sister and grandmotjer are both going to complain about this.

Iain have you written your application for his seat yet?

Is this in-breeding thing Ian's latest excuse for why the North Norfolk electorate were not sufficiently mentally aware enough to vote for him?

I would like to see those maps they produce on regional concentrations of various illnesses...........it always makes for interesting analysis to see regional clusters.

I cannot see what Gibson has said that is wrong - in this area we get lots of diabetes and heart disease due to smoking, and a propensity to consume ghee butter.

There was a big wedding in norfolk and every thing went very well, a lovely church servce followed by a wonderful reception.

After it had all finished the father of the groom was sat in his kitchen with a glass of whisky reflecting on the days events. His thoughts were disturbed by a frantic banging on the door and when he answerd it his son, the groom, was on the door step plainley distraught.

"Whats the matter son?" the loving father enquired. " Oh it's terrible repied his offspring, its all gone horribly wrong!"

"But the wedding was fine" said pater, "the service went well and reception was wonderful what could possibly have gone wrong?"

His son agreed that indeed the wedding had been a huge succes but said that "When me and my wife got back to the hotel and were about to consumate our wedlock, she told me that she was a virgin!, well", continued the son, " i didn't know what to do so I came ruinning back here, I obviosly cant marry the woman!"

Normally tell that joke about people who live on portland in dorset, but by the sounds of things it would work for norfollk to.

"Dr" Gibson must name the families he claims are inbred and provide genealogical proof to back up his accusations.
I know for a fact that he cannot do this. Norfolk has, over many, many years, had a healthy flow of newcomers into the county. Norfolk families have not only circulated around England, but also span the globe.
Perhaps he is thinking of his own country, Scotland, which has one of the most unhealthiest populations in the whole of the UK? I dare him to accuse the Scots of being inbred. It seems only the English are valid targets under the British establishment.
This is the man who told a Scottish newspaper that he wishes he had never left Scotland, because it now has its own Parliament and is blessed with favourable funding. He has said he does not believe England should be allowed to govern itself, or have the same favourable funding as Scotland.
His constituents should show him where the border is immediately.

After a trip back to his home land of Scotland recently, Gibson said "he wished he'd never left"
I think many in Norfolk wish he'd never left also. He is another Scotsman representing Scotland in an English seat.

ross_coe pecco - That joke, so laboriously recounted, has been around the American Ozarks for generations. The more succinct American version: Boy wants to marry a virgin and his father says no. "If she ain't no good to her own family, we don't want her in our'n."

I was always under the impression that sickle cell anaemia was largely confined men of afro-caribbean descent. If that is so (and I'll freely admit to the potential wrongness of my belief) I wouldn't have thought North Norfolk was an area likley to have a high incidence of the condition.

Still, I'm sure Iain's readership brims with knowledge about this sort of thing and I'm always willing to learn.

I seem to remember some years ago the story that when the wife of a Norfolk man gave birth to twins, he went around all the pubs in the area brandishing a shotgun, looking for the 'other man'.

No offence but i have noticed that coming from the south of england from a non inter related family that people from suffolk tend to have dark hair, a ruddy face sometimes with no chin and what i call half or slanting eyes and a tendency to have a complexion not unlike a gypsy. They also roll their hips when they walk.


Several of the suffolk families i know have problems with mental illness, sickle cell anaemia, physical deformities and are non non too academically bright.

Not sure about Norfolk although ive heard stories.