Just What Has Prescott Been Doing? 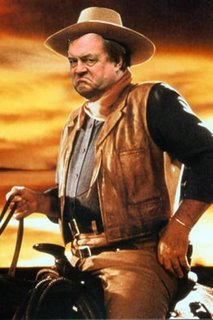 Martin Rosenbaum of the BBC's Open Secrets Blog reckons John Prescott has been doing bugger all for the last two weeks, while supposedly in charge of the country. See HERE.

UPDATE 6.50pm: I am delighted to share with you an email I have just received from the Deputy Prime Minister...

You've said this too much Iain and I know it I've been working oh yes so bloody hard at working and now theres all sorted out I mean we've had terrorists oh yes but the islamic church I mean of course we know and we don't like Islamics who we do like and if Sadiq Khan wants to go round blowing things up and a Labour MP I mean staying an MPs difficult like that but not impossible don't interrupt Jeremy I'm on top of briefs mine are OK oh yes totally in charge only yesterday I went to see Mr Khan and he told me what to tell the press and I have there's nothing at all to worry about my civil servants assure me and it's over a game of croquet or is it cricket oh bloody hell anyway they assure me that all is well the airports are coping British Airways is wonderful doing a wonderful job just terrible and Tony's on his way out oh yes John bloody Paxman and now we know why Ismailis are bombing yes someone told me I think it was that bloody Mandleson bloke anyway as I was saying before you bloody interrupted Jeremy I'm the bloody Prime Deputy Minister and theres nobody (contd page 94).
Posted by Iain Dale at 4:04 pm

Tell us something we don't know....

In many ways, that's a relief.

An unbelivable response, basically admitting that ministers act only in their own interests and would hate the public to know what they actually get up to.

If only an David Cameron would be brave enough to field this at the next PMQ's, and directly ask the Prime Minister what he thought his government had to hide.

But we know he has visited the front line at Teesside and Bradford Airports. He has also met with leaders of the Muslim Kommunity. That must have impressed our future muslim leaders!

He has plans, so I am secretly informed, to speak to the leaders of the Banyu Hatten AIKIDO club in Crediton to see if they will tell their leader Bin Laden to stop all the terrorism nonsense!

That will tell em.

You cannot keep a good man down, can you Tracey?

This government seems to be run by the same people who wrote yes minister.

The gist of the rejection appears to say the if the democratic process becomes transparent, then it will cease to work correctly.

John Prescott's done nothing for years, he's the political equivalent of a slug: fat, juicy, you can't see him doing anything but he leaves a mess where he goes.

If the Cabinet Office is saying no, maybe someone could ask his Diary Secretary what he's been doing, she must know what he gets up to?

Has John Prescott got a clue? Criticising the Leader of Her Majesty's Loyal Opposition for, erm, doing his job and criticising the government? When his criticisms are effectively more like "I'd probably do it ever so slightly differently" than "you're a bunch of incompetent idiots"? Did he actually listen to what David Cameron said - or is he just trying to remind us all that it's him, not John Reid, who's supposedly running the country in Blair's absence?

Either way, until the current "biggest crisis since Hitler(TM)" reaches such an extent that Labour offer to form a power-sharing National Government with the Tories and Lib Dems, as happened during the Second World War and Great Depression, they can shut the hell up when they come in for criticism, ta very much. Until the crisis reaches the extent that they're prepared to give up a bit of party political control for the national good, they haven't got any grounds to complain whatsoever.

What's the point of the FOI act if the government represses embarassing information (i.e. prezza has been doing nothing). But as cinnamon-marine says, we should be thankful. Wouldn't we be more worried if Prezza was co-ordinating the security response to the threatened plane bombings - we'd end up arresting musicians rather than muslims and we'd put restrictions on Leeds bus station rather than Heathrow airport

This lot would be as funny if it wasn't so bloody serious! They got rid of the Humphrey's (even the cat!)

I think a non violent riot is required.

I bet the women round number ten have worn trousers rather than skirts if Mr Prescott has time on his hands.

andrew woodman has identified why our great leader (number 2) is not looking so well (tapestry).

Perhaps he mistook a man's posteria for a lady's and he got a hecky thump?

We should start the Lets Pension off Prescott Club.

Ask Prezza's diary secretary, after all she should be intimately aware of all John's comings and goings
(sorry..)

Mr Prescott has enrolled in a course of Anglo Saxon at Oxford.

The message from his office quotes:=

I have always admired how Beowulf, Prince of the Gits battled against Grendel and then Grendel's mother, and believe me you wouldn't want Grendel's mother for a mother and I can remember my service in the maritime, as a miserable bar steward asking to leave as was my right at the time and my boss said "no" and I ripped his arm off and seriously you cannot trust theTories on this because though my use of language might not be up to Old-Etonian standards you know that I will always call a spade a straight handled garden digging tool. There will be no blood feuds in New Labour because, as the author of Beowulf puts it, "This was not a good bargain, that on both sides they had to pay with the lives of friends" So Tony and Gordon watch out. Education, Education, Education."

Now, Now Mr Dale - he did do a 90 second press conference a few days ago, grinning like a cheshire cat.

Steve Bell's if-strip cartoons have been on this trail for a while. The kennel with the sign "the dpm exists/does not exist and has / has not been fed" above it....

As to the FOI and secrecy in general. What is the oldest official secret we've got left? Anybody? Oh hang on, of course, it must be a SECRET!

Can't be bothered with comments on the loathsome, class-warrior philanderer today, sorry ;-)

just goes to show how little politicians matter, we do not need professional politicians.

John Prescott's outstandig achievement: the formal inquiry into the sinking of the trawler 'the Gaul' - and the close surveillance of the civil servant(s) who know too much about it.

It'sa good thing that he is doing nothing - imagine if he actually did anything (oranyone for that matter)!

I can't believe that you have so little to say in one of the most turbulent Augusts for a long time.

Are you on holiday?

If so everything is forgiven.