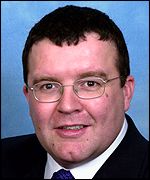 Tom Watson is an ex Labour whip and is now a Labour Defence Minister. He was one of the first politicians to blog. Today he he written THIS extraordinary post attacking Stephen Byers. He shows good taste, you may think, in his choice of opponent, but his post shows more clearly than anything that the sands in the Labour Party are-a-shiftin'. Tom Watson has always been seen as a tooth and claw Blairite, yet his cosying up to Gordon Brown is clear for all to see. Here's his post in full...

Steve Byers is being a very busy policy bee lately isn't he? In the media, if not in the House of Commons. Interestingly though, his recent pronouncements on inheritance tax have been soundly condemned by many colleagues, some in public, many more in private. I'm not sure if that's because of the issue or because people worry that Stephen is more concerned with picking internal fights than mapping out our policy future. Assuming that Gordon Brown is the choice of the Labour Party to replace Tony Blair, then I think he will have a team of people who are overflowing with ideas for the future. Ed Balls, Jacqui Smith, David Miliband, Pat McFadden, James Purnell, Andy Burnham, Liam Byrne, Yvette Cooper, Douglas Alexander, Caroline Flint and others - these are all ministers under 45. All of them are cooking on gas with policy ideas. He's worrying too much. Chill out Steve.

I wonder if Tom is attempting to add himself to that long list. He is after all a mere babe in arms at the age of 39. Hat tip to Spin Blog.

Tom Watson a Brownite? You'll be telling us that the Tories will repeal the Corn Laws next!

I've got a handle on chubby Tom - as an Orwellian sociopath.

"He presented the Organ Donation (Presumed Consent and Safeguards)"

"He is the co-author of of 'Votes For All', ... which urged the introduction of compulsory voting."

That's right he's only controlling you for your own good. Perhaps he ought to spend less time exercising his sociopathic tendencies on his PS2 [one of his hobbies] and more time trying to make real people happy.

Very useful list of names, reminding us that the younger Labour Blairites/Brownites (Alexander for one is a Brownite) have negative charisma and no independence of thought. (So no change from Blair there.)
I wouldn't put any of them in charge of a creche, let alone a government.

Tom Watson has always been seen as a tooth and claw Blairite? Dear, dear, Iain. There are few more ardent Brownites than Tom Watson. Your gossipers have got this one 100% wrong.

Bob, well, you should know so I'll take your word for it, I guess. But it is still vomit inducing stuff I am sure you would agree.

MPS are all "ites" now days.

Leaderites, unless the leader is going to change. If the MP has any sense, that is.

Being an MP is now a job like plumbing. Slightly better paid, but with many more perks. The most important ones being ultimately sexual in nature.

Maybe he should blog less and work more. Get us out of this mess we're in over here.

'Overflowing with ideas for the future', 'cooking on gas'. What about some bright ideas for today's issues? Watson is clearly just another NuLab shite jockeying for a position amongst the rapidly spiralling fortunes of the third rate bunch of tosspots masquerading as a government. Byers is right. Brown has had enough tax for NuLab to fritter.

Vomit inducing? Attacking Byers? Sorry, I couldn't possibly agree, savaging the small, but perfectly formed Byers should be something everyone is encouraged to do.

Incidentally, on the subject of the Brown-Blair business, I was out canvassing with one Midlands Labour MP in the General Election when, upon hearing of the fuss being created because Labour MP's were not pitting the Leader's photo on their election address, prompty got on the mobile to his agent.

"Make sure Tony's photo appears on the election address" said the ambitious MP. About three doors down he stopped, phoned again, and said, "Oh, and make sure there is a picture of Gordon too!"