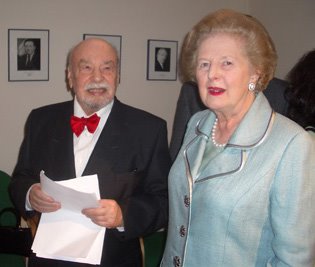 The Godfather of Thatcherism, Sir Alfred Sherman has died. You can read his full obituary HERE in the Daily Telegraph, but I wanted to add a few thoughts and memories of my own of Sir Alfred.

I first met him in the late 1980s at a time when he had been despatched from the Thatcher circle. At the time I was campaigning to persuade the Thatcher government to abolish the Dock Labour Scheme and in the process of building a coalition of interests to support the port employers's argument. As part of this I occasionally attended lunches at Aims of Industry (now defunct) run by the inimitable Michael Ivens. Sir Alfred was always present and would invariably hold court, reducing the rest of us to a stunned silence. I remember thinking to myself that he was the cleverest, intellectually most brilliant man I had ever met. But he was also exceedingly rude, and it was this character trait that led to most people surrounding Margaret Thatcher to cast him into the wilderness. They just could not cope with his persona and his brain.

I next encountered him in the late 1990s when he would turn up to booklaunches at Politico's. He constantly badgered me to publish his memoirs. In one way I was tempoted, because I knew that he was a Thatcherite before she was. His account of how he influenced her and gave the Thatcher Opposition the intellectual ballast it needed would surely be a pageturner. But two things held me back. Sir Alfred said he had never written more than 1500 words at a time and doubted whether he could write the whole book himself, so a researcher/ghost writer would be needed - not something I could finance. And secondly, I increasingly had sympathy with those 1980s Thatcher advisers who felt they couldn't cope with him. To me the relationship between a publisher and an author has to be a close one, but I didn't feel I could cope with Sir Alfred in various ways. So I put him in touch with Conservative academic and author Mark Garnett, who spent the next three years helping Sir Alfred put the book together. By the time it was ready I had sold Politico's Publishing and the book, Paradoxes of Power: Reflections of the Thatcher Interlude was eventually published by Imprint Academic. You can see more details of book HERE.

Sir Alfred was a complex man, a brilliant man, a difficult man and a scholar. His full contribution to the Thatcher revolution has not yet been recognised.

Another Thatcher era major player who's actually written his autobiography is Lord Biffen. He has the manuscript beautifully organised and it reads well. But he hesitates to select a publisher. If we ever have that blogger's game of golf, I'll ask you for advice on the best way to get him published.

Lord Biffen was referred to by Thatcher as 'the semi-detached member of the cabinet' - unlike Sir Alfred - not strident enough in Maragret's eyes!

tapestry, I too have read it and it is indeed excellent. Please email me privately.

"But he was exceedingly rude"
Sounds like a pompous ass to me, whatever his alleged intellectual brilliance.

Speaking from personal experience of many conversations I would say that he was, indeed, pompous but very far from an ass (and he would never attack anyone anonymously). However, his brilliance was somewhat tempered by his inability to listen to anyone. This led to him making the most spectacularly stupid pronouncements as well as some of the most intelligent ones. A real biography is needed.