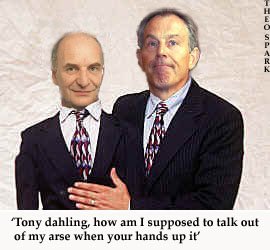 As you may have noticed, from time to time I use images supplied by TheoSpark. However, more often than not I don't use them. Not because they're not good, but well, as the late lamented Kenny Everett might have put it, they're not always in the BEST POOOSSSIBLE TASTE! They still make me laugh, but they might give some of my more sensitive readers heart failure. If you want to risk it, click HERE.

Anyway, this latest one by Theo is of Steve Pound, who I shall be debating with on Sky News tomorrow morning at 10.45. Subject? John Prescott. Stop that yawning at the back!

Actually, I think Theo has got Steve wrong. He's one of the few Labour MPs not to adhere 100% to the Blairite line. In fact, it's quite comical when he tries to. Steve Pound is always the bad boy at the back of the class who no one can quite take seriously, even when he tries to be taken seriously. But he certainly adds to the gaiety of parliament (no, not in that sense) and seems to have taken over Tony Banks's mantle as court jester.

The last time we were on the media together I got him into rather a lot of trouble. Remember the Today Programme Listener's Law competition a couple of Christmases ago? Steve and I were on the panel to compile the shortlist, along with the volutuous Julia Hartley-Brewer. I insisted that the so-called Tony Martin law was on the shortlist much to Steve and Julia's disgust - and blow me down if the Today listener's then picked it. Well Steve was then presented with a rather thorny dilemma as he had promised to introduce a Private Member's Bill on whatever law the listeners had chosen. He then reneged on his promise causing an almighty uproar. I don't think he or the Today Programme have quite forgiven me to this day. Oh well, it should be an enjoyable enough little joust. Pity Adam Boulton won't be there. He's still sunning himself on his honeymoon in the pacific. Although I see he has been blogging despite being away. Addictive, isn't it? I shall resist any smutty jokes about what he ought to be doing on his honeymoon in case he's reading this... And Adam, if you are - get back to bed mate!

Steve Pound started a blog in July. But dear oh dear. It's only got three entries and hasn't been updated since July 26th. I shall be remonstrating with him tomorrow...

you bin on the piss?

Will definately watch the paper review Ian, I've only just discovered your blog.

Prezza is priceless at the moment and must remain in post. As your audience will be rather limited in the middle of the silly season,it would be fun if you messed with Pound's head and the presenter by cheering on Prezza.

Turned over too late for the review but Iain your tie.....wow. You are in danger of becoming a style icon - the David Beckham of the blogworld.

Pound works hard to cultivate the 'cheeky chappie' role vacated by Banks. Actually, neither of them are or were remotely funny.

Pound uses the Diane Abbott trick when asked a tricky question and say's "you know what the real issue here is?" which fools the interviewer into thinking they're going to get a juicy revelation.

No, M.P.'s like Pound, Banks, and Abbott are 4th-rate and useless.

Well done Theo, shame we don't see Dubya with his arm up the Great Leader's arse!

Iain,
Extraordinary picture of Castro & Chavez with what appears to be a sex toy in the on-line Sunday Telegraph Picture Gallery "The Week in Pictures" claiming to be from Reuters - sure it must be a Theo Spark one!

Hmm - not enough time to have a real debate I think. Shame.

.....BEST POOOSSSIBLE TASTE! They still make me laugh, but they might give some of my more sensitive readers heart failure. If you want to risk it, click HERE.

I did and found THIS - "skirt wearing drunken illegitimate illiterates" - I have e-mailed your employers, Orange, to have you immediately executed in a Braveheart manner and invite all other liberal reactionaries to do similar - please be quiet, I let you finish your blogging, the least you can do is listen to my answer - to highlght your obviously(by association) Anglofascist racist comments. Unless a full and wholesome apology appears on the following: WeeFreeJihadistsForThe SubjugationOfAllAngloSaxonParliaments.co.scot
by return of electrons I cannot accept responsibility of the less moderate members of my religion.

This is not a threat.

ps just saw you on Sky - be nice to Mrs Dale and she might advise on shirt ironing.