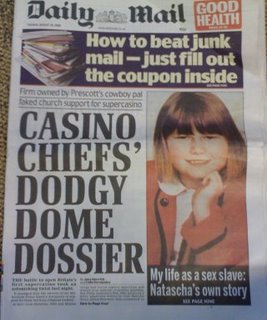 Yesterday's exclusive about the Anschutz Casino bid in Greenwich has not only made the front page of the Daily Mail, but all the broadsheets (except the Independent). It also made the final interview of the Today Programme. All the newspapers and Today attributed the story to this Blog, apart from The Times. Words will be had...

I may be wrong but I think this marks yet another step change in the relationship between the mainstream media and blogging. Journalists are far more willing to 'go' with something they see on a blog than they were even a few months ago. There's no longer that slight distaste that was there before. Most have finally come to realise that there can be a mutually beneficial relationship between the blogosphere and journalists, which doesn't have to turn into a destructive one.

There is another phenomenon which this story illustrates. I make no pretence for being a super sleuth which uncovered the AEG emails. I merely put them 'out there'. This is the third occasion when someone who is involved with a smaller blog has approached me with information which they feel would be ignored if it just appeared on their blog. They believe that if I put it on my blog it will get the attention it deserves. So there's a sort of BLOG PYRAMID EFFECT developing. I know Guido has experienced the same. There's nothing wrong with it - it merely mirrors the same trend in the national media. Many stories you see in the national papers have appeared (albeit maybe in a slightly different form) in a local or regional paper the day or week before.
Posted by Iain Dale at 9:18 am

Indeed, congratulations Iain for breaking yet another great story and for exposing the unscrupulous manipulations to which some are prepared to go to just to have the Dome become a casino.

Which brings us onto the main subject; why on earth is it such a governmment priority to have more casinos? And why is this government apparently giving so little attention to things that really matter, like the kit our troops in the so-called "war on terror" (which actually seems to be run from Whitehall like an incompentent little Sunday outing) lack?

This "pyramid" effect is important, for it gives a voice to the little people and ensures that stories with the "wrong agenda" get out there.

I hope editors are asking their reporters, "Why did Iain Dale get the story first?"

I have often thought of this medium as being similar to the pamphleteers of the Eighteenth Century. You can be controversial, occasionally scurrilous and at your best, an agent for change.

Is this the new voice of the counterculture? I hope so, because it certainly has been denied one by the mass media.

It is cetainly in the interest of all right thinking people that the blog pyramid has the widest possible base. There is a danger that a narrow base produces a misleading impression of real public opinion. viz: " Read Peter Hitchens comments, he speaks definitely for the people I mix with socially and professionally", on your Kennedy post a comment.

If I were a New Labour spin doctor I would be copying and pasting many of the comments posted by your correspondents and passing them on to whichever constituency you get. "Look what was on Iain Dale's blogsite!!!"

why ru you advertising Adam Rickets reading of your blog. Do you have no shame man?

You - and your readers - cannot be everywhere at the same time, so I take the liberty of repeating the latest update from Greenwich Watch (and I hope they don't mind):

"A little more information has come to light since the exposure of the story regarding fake documents presented to the Casino Advsiory Panel. As has now been widely reported thanks to our original work, it was the casino company, AEG that produced the documents and in particularly a senior manager there called Rosa D'alessandro.

Something however that has not been commented on in the press is that Rosa's previous employment was as Tourism Development Manager for Greenwich Council. Isn't it all looking rather incestuous?"

There must be a law against it?

And why do the govt need the Casinos? In Greenwich's case it's clearly to get them out of their Dome embarrassment. But more generally, they're just suckers for glitz.

Thanks for the traffic Mr Dale!

The media obviously trusts the editorial content of your blog and knows you would stand by what you write, hence the reason for your successes. Fantastic! And more please!!

Have you given some consideration to the inverted pyramid - take for example your report on Boruc getting booked, which was actually based on a media report which Archbishop Cramner pointed out to you?

I'm not really sure where we can go with that, but I'm struck by the reverse symmetry, in that I originally read about it on your blog, and then followed through another blog to the actual media report.

Good term, it’s a social network of social networks. As long as the smaller blogs are linked and credited by the bigger ones (and party political prejudice doesn’t get in the way of a good story) then I don’t see a problem.

Big ‘uns giving the lil ‘uns a leg up and they in turn to those below; we all rise together and the impact on the media means a better democracy; with more informed citizenry being the ideal goal.

I picked up on the story before His Grace did, but that is by the bye.

I now appears that the agencies concerned have backtracked furiously on the Boruc story and are now denying that the charge was based upon the footballer making a religious gesture.

I think they have been quite stung (for they must also read the blogs) that they have been accused of religious persecution and offences against the convention on human rights.

The Church is still a very influential lobby up in Scotland and regardless of the sectarian divide, this affair made warning bells ring in very high places.

Well done on this Iain.

Congratulations are in order, Mr Dale. However, as a loyal reader of your blog I would ask you not to take your eye off the ball. There are more important things in life than politics. You haven't posted the leaders of the Iain Dale Fantasy Football League this week. Standards are definitely slipping.

I'm fairly remote from the UK to be getting "scoops", but where I feel that something deserves a wider audience, I have no hesitation to pull in big bro' Iain or other influential Tory bloggers. Collaboration? - I highly recommend it.

My impression has always been that the disdain for the blogosphere (or the sixth diomension?) was generated by the Downing Street spin machine.

The legitimate press have a responsibility to check our unsubstantiated allegations of course but increasingly they seem to be finding there is some substance buried in bloggers stories after all. We may not always be on the nail but we often highlight the fact that many people have much to hide.

Talk about breaking into mainstream media... you have even got a mention on the back page of the latest edition of Imagine, the magazine of Republic: The Campaign for an Elected Head of State!

Someone at the Mail obviously likes you - their online version says "The leaked email correspondence was published on the political gossip website of Iain Dale (PLS KEEP)."

Congrats in your Mail scoop.

Any chance of a reciprocal mention on your blogroll as offered last week.

I'm sure you're getting loads from mine!!!

I also think that Private Eye was the first 'printed' blog, when computers were main frames the size of a Tesco lorry.

Think back to Paul Foot and The Slicker of Wakefield, etc. I heard that the rot started from Footnotes and sent the architectural press into overdrive.

Iain, a PE blog, with you and Guido would be all we need from now on - sorry the rest of you - pyramids or no pyramids.

Not being disloyal Iain, but all my old copies up in the roof need to be sold on ebay soon, as Mrs Scroblene will inter them in an unusual place...