Let's Unmask the Unzipper - You Know You Want to 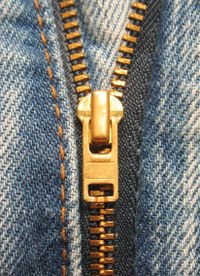 The whole of the Westminster village seems to be agog with this new sex novel called UNZIPPED. There was a big feature in the Indy on Sunday today making a rather weak attempt to identidfy the author. It's apparently someone 'steeped in Tory politics'. Translated, that probably means it's written by someone most of us have never heard of. He's reportedly a former Tory PPC in his mid forties, who used to be a lobbyist. That sounds, er, rather like me, doesn't it? But he's also married with two children. Phew, let off the hook. And apart from that I can't write sex. Well, having said that, I've never tried, you'll be relieved to hear. I suspect there would be an overuse of the words 'thrust', 'writhe' and...well, shall we stop there?

Anyhow, wouldn't it be nice to unmask (or should I say 'unzip'?) the culprit in the blogosphere? I can think of no better place to unzip than here, so do email me if you have any clues as to who might have written this grubby, and most certainly unputdownable book. Reminds me, must buy Ann W a birthday present...

With the clues you've provided, what chance do we have if you don't know?

Come on Iain - you're such a tease, you MUST know, spill the beans.

But what's the real interest in this book - is it supposedly biographical?

"With the clues you've provided, what chance do we have if you don't know?"

The Indies piece linked has some more clues:
- he's 46 years old
- he's a councillor
- he stood for Euro Parliament

I have been doing it wrong.

Presumably the author doesn't wish to be unzipped, as if he (or she?) did, he would surely unzip himself.

I thought Guido suggested (ages ago BTW, this is Seriously Old Hat) that it was a gentleman named Oppenheim, but he never rang back (which could have been an excuse for GF not coming up with the goods).

Or it could be a gentleman named Fawthrop from Bromley. Yes, improbable I grant you.

Anonymous, yes Guido did suggest Philip Oppenheim, after a conversation with me in which I said I thought it could be him!

Virginia Bottomley...take my word for it!"!

I own up. It was me that written it!

Not GF. Methinks a book like this would be a staine on his character.

Yes, very messy I would have thought, writing whilst having sex. A bit disrespectful too.

The Pendennis column in the Observer today says that there is nobody who fits all the clues - so there must be some red herrings in there. Unless it is a collaborative effort!

Iain, are you being devilishly clever or are you asleep at the keyboard?

bob - 7.47pm ; "Yes, very messy I would have thought, writing whilst having sex. A bit disrespectful too." Quite agree, I like the full attention of my correspondent.

Seriously, there's one such passage in the 18c novel 'Les Liaisons Dangereuses' by Laclos, where the depraved nobleman pens a letter to his long-time mistress (the Jeanne Moreau role) resting his notepaper on the back of his new young conquest.
Laclos doesn't need words such as 'writhe' and 'thrust' - he manages with elegant hints and double-entendres. Quite a book: Go read.

Luke, seriously, STFU. How many blogs have you posted that on? Go away and come back when you can spam competently.

Of course, that is assuming that he is 46, a councillor and has stood for a seat as an MEP... a wise person would have changed details surely?

I actually thought our illustrious host might be the 'Unzipper'

If our genial host is the unzipper, then he has significantly altered some of the key facts in his story! I think it is quite well known that Iain has different tastes to those of this most imaginative author...

A quick check found 14 Conservative 1997 candidates in the right age range and have never been elected before or since. However, only two of them have been European Parliamentary candidates. Of these two only one has been a councillor (and that for only one year). Personally I suspect the other, who has never been a councillor but has stood several times, to be the more likely candidate.

Should I name names?

Oh, it's certainly not Iain himself!