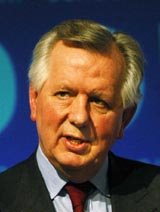 The Observer's Ned Temko is a journalist I rate and respect, so it was with some degree of astonishment that I read THIS in his newspaper this morning.

David Cameron's transport policy review team will propose a radical programme for steep tax rises on air travel and gas-guzzling cars offset by cuts in council tax, VAT and national insurance, it was revealed last night. The head of the review, former MP and London mayoral candidate Steven Norris, said there had been unanimous agreement that climate change 'is the most important challenge to the planet' - a view he said was shared both by experts and a public that was 'absolutely ready to change' its behaviour. He added that the proposed policy shift, which he thought Cameron was likely to endorse, could well set up a major general election battle between environmentally radical Tories and Liberal Democrats against a Labour Party that was 'a million miles away' from seriously tackling the issue. Norris was particularly critical of Gordon Brown, the likely successor to Tony Blair, for having frozen airline passenger duty for five years and added only £40 to vehicle excise duty for the most polluting cars. Under the proposed new policy, road tax on top gas-guzzlers could rise by over £1,000, Norris said. While dramatic tax changes on airline fuel would take time, because they required international agreements, he said he was recommending an immediate increase in air passenger duty - up from £20 to as much as £100 for long-haul flights, and from £5 to £20 for European trips. He also proposed to halve council tax, cut VAT by 2.5 per cent and NI contributions by 3 per cent.

LibDem blogger Peter Black AM reckons Conservatives will be spluttering over their cornflakes. I couldn't possibly comment... Well, OK, I don't eat cornflakes, although I can still splutter. Just as well I didn't spot this before doing the News 24 paper review last night...

What I do not understand is the last sentence. These issues have nothing to do with the Commission Steve Norris chairs. And I have my doubts as to whether those welcome tax cuts could be financed by the measures outlined earlier in the article. So until we get the full details, I'll reserve judgment.

Oh dear. I can't rememember what it's called when one equates a tax cut with tax relief (hypothication perhaps) but whenever one sees it on the agenda I'd suggest one takes a tight hold on one's wallet.

I'd so much like a Party with integrity that I could vote for.

There are several problems with reducing Council Tax / VAT / NI to compensate for environment taxes. If environmental taxes are successful, the revenue gained from them will decrease with time as people change their behaviour leaving a black hole.

Secondly, if you are going to halve council tax, this will presumably come from an increased central government grant which reduces the accountability of councillors for the amount of council tax they set.

I agree Iain - the sums don't add up and such proposals would also have a major inflationary impact.

However, any moves towards consumption based taxation is to be welcomed providing the revenue raised is used entirely to cut direct taxation.

Yay !! The Conservatives don't need to bother with all that policy review nonsense - they just wait for the Lib Dems to announce one and nick it ! This is far less foolish than it appears. Politics is no longer about policies but presentation and marketing. So the tories could be the coke to the Lib Dems pepsi !

Whilst I am all in favour of 'green' taxes to penalise polluters, this is going to annoy a lot of farmers who need a four wheel drive vehicle for towing.

Great proposal from 'Shagger' - hike up taxes on four wheel drives, so that his Road Transport Associations 32 wheel vehicles can get off more lightly !

Don't you just love being in control ?

pls tweak the banner colour gently - it is good but could be great if it was closer either to victorian red or terracotta.

I thought Norris was more pragmatic than this. It really does hint of dangerous nonsense. There is no way it would raise enough revenue to meet the tax cuts mentioned. There would be significant damage to our economy by imposing such taxes in a global market. Looks far too Lib Dem like for me.

'Whilst I am all in favour of 'green' taxes to penalise polluters, this is going to annoy a lot of farmers who need a four wheel drive vehicle for towing.'

Exclude Land Rovers is the easy answer to that. Patrotic as well.

Sorry but I have to say something in favour of this. Anything, and I do mean anything, which proposes slapping a tax on those bl**dy Ryanair flights has to be good.

If it manages to shut the gob of that awful, impolite, rude eejit Michael O'bl**dyLeary for even one day would be worth the pain...

In fact, whilst you seem to think that Reid's measures were a fiasco they did at least achieve the effect I hankered after above.

Anonymous 9.08pm on the ball. If they are going to introduce an environmental tax (and it looks like too much for various reasons)

1. It should be phased in to allow people/airlines to change behaviour.
2. No matching tax cuts should be mentioned. Politically, the Tories should keep those in their back-pocket so that the public can give them credit for those separately.

Airfares to Prague could go back up to the levels of five years ago before the budget providers came in. There'll be less stag dos here. Sign me up!

If environmental taxes are successful, the revenue gained from them will decrease with time as people change their behaviour leaving a black hole.

Surely the point is that environmental taxes of the kind proposed *aren't* successful. The fuel scale escalator, for example, has had no effect in reducing the level of traffic on the road or the number of large cars used.

Not sure I agree with James Hellyer - I think the fuel price escalator has had exactly the desired effect of helping the Treasury to balance the books.

The environmental argument was always a fig leaf. The fact is that no one in local government will bite the bullet to reduce traffic by introducing congestion charge [apart from in London].

All the other proposals are just window dressing - the only 'green' they are interested in are our five pound notes.

What's Norris banging on about tax for? There's a Tax Reform Commission for that - and I bet that won't go on about the state of the UK motorways.

There's already lots of tax on car fuel, and you pay more of it the more fuel you use -Norris should try getting rid of some old taxes before creating new ones

Strong case for passenger duty rise just to pay for customs and immigration at airports. User pays and all that.

As others have already said, so-called green taxes arn't; they are just a fig-leaf for higher taxation, because people simply pay up, do what they were going to do anyway, and then vote against the bastards who imposed (or proposed) the tax at the next opportunity.

For Tories, of all people, to propose a huge jump in airport tax is going to come over as taxing the (relatively) poor out of flying, just so "these rich Tory bastards" can be left alone to enjoy its pleasures without the crowds of the great unwashed spoiling it for them.

So, in summary, the proposals will have no green benefit and at the same time will be a massive vote-looser. (Say what you like but G Brown learned this lesson at the time of the petrol tax protests.)

Does the Tory Party really have vote to squander on pie in the sky nonsense like this?

This peculiar piece of news appeared nowhere but in Guardian Unlimited/Observer and this morning there is no current mention of it anywhere.

Isn't the silly season wonderful? But mysterious with it...

The trouble with this is that I could, just, accept an massive rise in VED providing there was a relaignment of the types of cars caught up in this. Sadly, the poorest in society tend to have the oldest cars, and therefore those most likely to get caught in the higher duty.

And I was half sure that Cameronhadn't swallowed all that man made global warming nonsense. However it seems that the way for anyone to get on in the Tory party is to suggest tax rises in general, and so called green taxes specifically.

Oh for a party that will be honest and say that global warming is based on bad sience, anti capitalism, anti western values, and anti people sentiments and should be killed.

How many more people are to be killed through "enviromentalism", the malaria sufferers who could be helped with DDT, the hungry who could be fed with GM crops, the poor who could earn money by using food miles ??????

This is moonbattery. Thank the Great Spaniel in the Sky that Shagger isn't going to be Mayor of London after all.

Sounds like the perfect way to kill off in one fell swoop the UK tourist industry as well Heathrow, the world's busiest airport, as if it didn't have enough problems already.

Don't the idiots who dream up these unworkable ideas realise that such measures can only be introduced on at least a pan-European basis?

Following Labour's recently announced intention to seriously consider the introduction of "big brother" road pricing for all car journeys, not just on motorways, it reinforces the old adage that "if it moves tax it".

Let's just hope and pray that this doesn't eventually extend to bowel movements!

1. The thing that causes all the bad environmental effects is the burning of petrol, not the existance of a 4x4.

2. To "save" the environment, the thing that you want to deter is the creation of emissions (hence the burning of petrol), not the ownership of 4x4s.

3. Therefore the thing you want to tax is petrol.

This isn't rocket science, people. Gas-guzzlers parked in a garage don't make emissions. Raising the road tax on inefficient vehicles is an exercise in muddled thinking. Those vehicles get to be more expensive by - wait for it - using more petrol.

The problem is, if you introduce an "environmental tax", you just look like Gordon Brown with your fingers in yet another till.

If, however, you introduce an environmental tax, ring-fence the money raised and return it to the taxpayer by, let's say, increasing the threshold for the starting rate of income tax, you explicitly make your "environment tax" revenue neutral, and so are fairly immune from accusations of "stealth tax".

Spend a few years making it explicitly crystal clear (in the budget speech etc.) that this year the threshold for income tax has been raised by x% in line with inflation, y% due to efficiency savings and that next year there will be a further z pounds of income free of tax to return the environmental charge money to the taxpayer, and it will become politically impossible for a future government to try and claim political capital from a "tax cut" funded by this environmental charge.