Is Mr Speaker's Health Up to the Job? 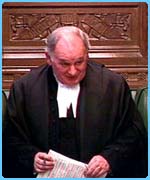 Many MPS - and not just Conservatives - came out of PMQs today chuntering about the performance of the Speaker. At one stage he threatened to suspend proceedings if Tory MPs didn't stop hissing. The only trouble was, they weren't hissing at all - they were trying to shoosh so they could hear what the Prime Minister was saying, as he was attempting to dig himself out of his latest hole. Michael Martin is clearly not a well man - that was even evident from listening to it on the radio. He had a serious operation recently and his faltering performances - not just today - might well see his friends try to persuade him that he should step down sooner rather than later.
Posted by Iain Dale at 5:22 pm

Iain
Maybe Speaker's health is not good and maybe you're right about the 'shooshing', but there was quite a but of noise-it was really bad last week too- and I thought he was justified in his warning. The reviewers on Daily Politics also referred to 'yobbish' behaviour by Tory MPs so there must have been something to complain about

Not only was Martin was appalling today, he was biased too - just look at how intervened to save TB from making even more of a fool of himself during his poor answer to Cameron - and then let Dennis Skinner rant on about some supposed Tory scandal from donkeys years ago.

Worst speaker in my lifetime by a country mile. And I haven't forgotten the fact that he was shoehorned in by Labour to the despite of Commons convention.

I know that if convention had its way that Michael Martin wouldnt have got the job - but I still quite like him!

Once again a bunch of Tory snobs whinging on about the speaker. Seems the only working class speakers allowed are those like Speaker Thomas - who was so fawning to the establishment that he could never stand up straight.

I wonder, if Gorbals Mick is eased out during this Parliament, will Labour whip the troops to help elect a Tory MP like Sir Alan Haselhurst or Sir George Young as Speaker so they do not lose an MP's vote?

The traditional convention (until Betty Boothroyd's election in 1992) was that the Speaker is chosen - at his/her original election - from within the governing party.

So, historically at least, Martin's appointment constituted no breach.

Erm just what's the evidence for this precedent? Betty Boothroyd was not the originally proposed candidate in 1992 - that was Peter Brooke I think. Generally Speakers have tended to come from the government benches regardless of whichever party. Is this supposed convention just one thought up to provide a breach for convenience of attack?

Anonymong - maybe read the posts before you come with your typically socialist class hatred! Not all Tories are rich and from the South, and not all Tories dislike Martin. I think the point about him being ill is fair, and that it cant be an easy job if you arent 100 per cent.

Seems the only working class speakers allowed are those like Speaker Thomas - who was so fawning to the establishment that he could never stand up straight.

Somewhat unfair Anon - Betty Booothroyd was both greatly liked and repected by both sides of the House.

He's been biased and not up to it from the start.

Yes, look how snobby we are, being concerned at the health of the Speaker of the House of Commons and how that affects the business of the House. How very shameful of us.

John O., the labour Government hasn't exactly been the most faithful to historic tradition, convention and precedent. You must forgive our shock that Labour followed the rules for once.


I, too, thought the alternating convention went back donkeys years - don't suppose it really matters just as long as the Speaker is seen to be wholly impartial, which aspect has caused some concern as regards the incumbent.

He was bad and the noise started because Blair was not sticking to the question.

One of the worst Blair responses was the question about successes of the Home Office and Blair listed other Departments.

A Speaker needs to be able to rein in the Parliamentarian even Prime Ministers.

After Betty, it wasn't Labour's turn. I think Sir George Young was a contender...?

In fairness, although the Conservative Members weren't hissing, they were shooshing in a stage way in protest at being quietened by the Speaker, not in order to hear what the Prime Minister was saying. But it is true that the noise level in the chamber was extraordinarily high.

When Tory MP Moss asked Blair about whether he had asked Prescott to give up Dorneywood, Blair was allowed to ignore it with the the non-answer "I've no intention of discussing the reshuffle". Blair usually spins the answers, but why is he allowed to ignore questions. It's not as if it was a matter of national security.

Speakers since the War

Precedent was speaker from the governing party at the time a vacancy arose. There was only alternation between 1965 and 1992 because the government alternated frequently, Betty Boothroyd's election was the breach of precedent.

Oh Bollocks! That means my entry to the Little Red Book contains a teensy inaccuracy.