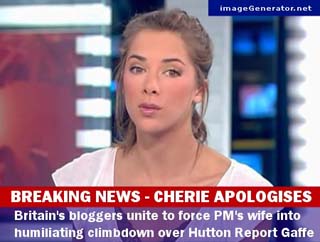 I wouldn't be bothered what the headlines were if she was presenting the news. Sorry but someone had to say it.

Melissa Theuriau. It would be quite an achievement for bloggers if the Cherie apology made international news

Here's my tuppence-worth on the affair:

Did you see what Fiona Millar has said Iain?

My first reaction on seeing that picture was: "Bloody hell! Don't tell me I put my beer goggles on by mistake this morning".

Then I calmed down secure in the knowledge that I wouldn't survive drinking the amount of beers needed to make Cherry that attractive. Thusly I deduce that: a) I am not completely pissed; and b) that's not Cherry.

So who is the comely lass?

By the way, thanks for not inflicting another picture of the Duchess of Downing Street on us. I'm not sure my constitution could handle it, even after a few prophylactic whiskey's.

I read on the BBC website that no money will now change hands for this report.

What about the copy that was auctioned much earlier and resold on ebay?

Tome to make the media aware of this earlier copy - who purchased it and resold it on eba???

For all the people wondering who the girl in the picture is... she's an Italin news reader.

While she's at it, perhaps she could drag Tony along to apologise for taking the country to war on a lie (oh, not to mention wasting billions of pounds of taxpayers money, employing Alistair Campbell, putting John Prescott in charge of planning, the list goes on....)

Anon @ 8:50 says: "I read on the BBC website that no money will now change hands for this report".

Assuming that the purchaser wrote out a cheque on the night of the auction, does this classify as another one of those famous "loans" to the Labour Party?

My guess is the stupid berk who purchased the thing has reallised the ire that will be directed his way when his name comes out. To try and prevent this he's cancelled the cheque and sent the infamous report back to Cherry in a plain brown envelope.

Far more likely that news reports will feature rumours that copies of Hutton are being collected for 'recycling' and, quite coincidentaly, somebody in No. 10 has become an avid autograph collector.

That Ebay is being overwhelmed a flood of variously signed copies (each with a reserve price of £400) offered by a seller identified as 'wigforsale', is of course totally unconnected.

Dizzy, she's French, and as anonymous said earlier, her name is Melissa Theuriau. If only the BBC hired newsreaders like her; they could at least then justify presenter's salaries.

Justify the salary? I might even push the boat out and buy a licence!

From Peter Allen in Paris
29 July 2005
The Daily Express

GORGEOUS newsreader Melissa Theuriau is bound to give any TV station a ratings boost.

Billed as "the most beautiful newsreader in the world", websites have already been set up in her honour while her image is sent in tens of thousands of emails every day.

US stations such as Fox News and ABC are just some of the TV giants trying to prise French Melissa, 27, away from Paris-based LCI.

"Ratings shoot through the roof when Melissa comes on" an LCI source said yesterday. The channel attracts up to 13 million viewers but millions more switch on when Melissa appears on its breakfast show.

Media analysts say she is such hot property that she could earn up to £500,000 a year and join the big league of newsreaders like Britain's Kirsty Young, Mary Nightingale and Natasha Kaplinsky.

And the good news for male viewers is that she is still single and prefers to spend most nights at home.