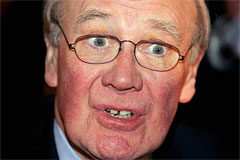 The Scotsman reports that LibDem leader Ming Campbell has apologised for the fact that Bromley & Chislehurst LibDems are already campaigning, before Eric Forth's funeral has taken place...

"Sir Menzies Campbell, the Liberal Democrat leader, lambasted his own party yesterday for starting to campaign for a by-election just days after the death of the Tory MP Eric Forth... Sir Menzies paid tribute to him, telling journalists: "Eric Forth was a friend of mine. He was born within a mile of where I was born. I deprecate any effort to begin electioneering under any circumstances in any by-election until the writ has been moved by the party with responsibility for doing so." ...The by-election is expected to take place on 29 June."

Well done to Ming - a true sign of leadership. And I never thought I'd see myself writing that.
Posted by Iain Dale at 9:09 am

Why is it that the fact that the local LibDem party are already out & about doesn't surprise me at all? They must have utterly no shame, but then I've grown used to that from Libs by now.

And when I've complained in the past to local Lib Dems in my area about their disreputable tactics, they say it all comes from the centre. Will any of them take responsibility for all their sleazy campaigning...

I agree with both comments so far. They are a nasty and angry little party run by amateurs - and presided over by one too!

There's a hell of a lot of Lib Dem email lists, many of which use the Cowley Street server. It's a bit far-fetched to suggest that all emails on these groups are "approved" by party HQ.

And, by the by, why all the song and dance about a load of leftover "thank you" FOCUSes from the May elections. Given that these would be going out anyway and presumably were produced before EF's death, can anyone explain to me why this constitutes "bye-election" campaigning as opposed to conventional post-local election campaigning?

Am also surprised that Iain hasn't commented on one local Tory activist's public assertion that "the last thing we need down here is Central Office imposing some homosexual on us as candidate".

Just for completeness, this is the actual text of the mail with the paragraph reinserted that was cut from the version you posted - putting it back in does change the tone somewhat.

As usual in these situations, we'll act in the normal way out of respect for the deceased and their family. Once the funeral for Eric Forth has taken place, we'll let you know more about what's to happen in Bromley and Chislehurst.

In the meantime, the local party want to clear the decks ready for what's expected to be a busy time. They would very much appreciate extra help to get their Thank You Focuses out in Town Ward and Plaistow and Sundridge wards.

Please call Toby Philpot on xxxxx xxxxxx if you can offer your help, and perhaps bring over a few of your colleagues from your local party?

There is a fast train service to Bromley South from London Victoria -- about 15 minutes journey time. There is also a stopping service on the same line, and others from London Blackfriars. Other stations in the constituency include Bickley and Bromley North (latter on a branch line). No doubt Toby can provide extra information.

Why shouldn't a political party get out local election thank you leaflets, and get them clear before an unexpected by-election? Could this be sour grapes? In my street the only time we ever see a Tory leaflet is before elections. They never thank us for voting!