Another Reason Not to Visit Blackpool (As if We needed One) 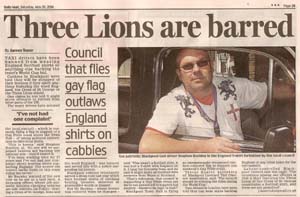 Blacckpool Council has banned cabbies from wearing shirts with the Cross of St George or flying any flags from their cabs during the World Cup. You'd think they'd have something more important to worry about, wouldn't you? Like dragging Blackpool's reputation up off the floor and making it a place people might actually want to visit, for example. Some twat of a council officer grandly told the Daily Mail: "The consensus among our officers is that a shirt featuring the Three Lions or the Cross of St George constitutes a football short, and these are not permitted." Last time I looked, a council was run by elected councillors. I'd suggest that Labour's ruling councillors reversed this decision PDQ. Even Ken Livingstone hasn't thought of doing something so stupid as banning England shirts in London cabs. He'd have a revolution on his hands.
Posted by Iain Dale at 7:35 pm

Maybe if Tories such as yourself stopped saying how shit Northern towns are ("dragging Blackpool's reputation up off the floor") and stopped calling the people it elects "twats" we might actually have some success up here and not be, as in some places in the north, the fourth or fifth most popular party.

The point you make, Iain, concerning this silly ban is valid - but the Blackpool insults irrelevant. When was the last time you went to Blackpool, by the way? As for being "a place people might actually want to visit", Blackpool remains a tourist stronghold.

northertory, you're getting a bit defensive aren't you? I only said Blackpool was not my cup of tea, not all northern towns. Incidentally, I don't like many southern towns either. And the person I called a twat was not an elected person, but an unelected bureaucrat who has got nothtying better to do than be a jobsworth. I last went to Blackpool 18 months ago - and no doubt will be going again in October. Perish the thought.

It's grim up north... Harrow used to be lovely.

Iain is perfectly right about Blackpool. What a dump !

Not convinced ?
Go there on a weekend in the season and see for yourself.
How many reasons do you want ?
Constant crime....
Drunken tourists....
Not to mention the decrapidated buildings, filthy streets, and over the top prices !!

Remember... all that glitters is not gold.

I totally agree with Ian and i'm from 'up north'.I recently spent a night in Blackpool, what a dump!
The council would be better off trying to clean up the 'resort' and bring it into the 21st century.

The left's complaints about the Union flag often revolved around the concept that it had been hijacked by skinheads, but the opposition to the St George's flag which has not been used to any significant extent by extremists, reveals their true agenda- to make it shameful to have any feelings of national pride.

What about the other "A-list behaviour" reported in Saturday's Mail?!

Blackpool cabbies must have some sort of representative "body" or association. They ought to get their heads together and decide to withdraw their services until this ridiculous ruling is overturned.

Let's see how the drunken tourists can get around after the trams have turned in for the night! NuLabour is doing Blackpool a terrif disservice.

I am not sure any serious person goes to Blackpool any more. With the increase in disposable income, those people go to Disneyland now. It like a rich man`s Blackpool, though it seems Mickey Mouse is on the council these days. I worked in the north west for a while, and most of the people are not backward, but if they are silly enough to elect representatives such as these then they deserve the ridicule people like Iain heap on them.

I live in Standish, north of Wigan, and I avoid Blackpool like the plague - it's long ago decided that it's future lay in catering to pissed up hen parties and the like. You make your bed and you lie in it I say. Mind you, having said that, Wigan Town centre on a Saturday night resembles the Wild West!

Anyway, towns like Southport have got better architecture and cleaner streets and seem to manage to balance the 'seaside' aspect with some decent shops and amenities. Lytham St Annes is also quite nice - but dull.

Maybe I'm getting defensive because I'm the one who spends all my time trying to get people in poorer areas of the north to vote Tory. Telling them they live in shitholes doesn't seem to do the trick.

I don't understand how the council official can "instruct" taxi drivers on this - are they employed by the council? I thought they would be private companies, or drivers for a private company.

I agree with Iain - the only time you can enjoy the view in Blackpool (apart from in the rearview mirror, of course) is if you stand on the seafront with your back to the town and look out to sea. It is a terrible dump, with what seems like a layer of grease over everything. Most Northern towns aren't like that - but Blackpool definitely is!

But I also wonder what on earth it is to do with some unelected jobsworth what the taxi drivers wear. THEY'VE decided a shirt featuring the Cross of St. George is a football shirt? What business is it of theirs? Apparently the Town Hall is currently flying a Gay Pride flag, whatever that looks like - did they ask the electorate whether that was OK or not? Why is that OK and the English flag on a shirt "not permitted"? Blackpool was in England last time I looked. If I lived in Blackpool I should be asking my local councillor what he thought he was playing at.

I was born in Blackpool and have relatives and friends who still live there, they all say the same, hen and stag nights are killing the town for the residents because the pubs and clubs only seem to cater for them.

No one I know in Blackpool goes anywhere near the town center on weekend nights any more.

I can't understand this total backlash against any expression of English patriotism by the left wing idiots in power throughout this country.

The "twat" concerned will be involved in the licencing of taxi drivers which is why he will have got away with this stupid ruling, and he probably doesn't have a clue what a football shirt looks like.

Maybe I'm getting defensive because I'm the one who spends all my time trying to get people in poorer areas of the north to vote Tory. Telling them they live in shitholes doesn't seem to do the trick.

Well, there goes my theory that the Tories should go for an "always tell the truth" policy...

Morning Star... i was born in Blackpool and lived there until moved to university.

Everyone ehinges about the stag and hen parties. However, if it weren't for them who the hell would visit.

It is far cheaper to fly abroad than get to Blackpool!

The perfect riposte to this can be seen at http://thegermansbombedmychippy.blogspot.com/ courtesy of Tommy English at http://in-ger-land.blogspot.com/