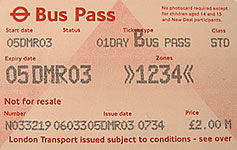 Free prescriptions
free glasses
free travel
huge index linked pension, the old geezer is in clover, why doesnt he quit while he is ahead?

Iain, Interesting to see that your £2 tube ticket from December 2003 would have tranported you through 4 zones (for those who don't know London, that's probably around 20 stations), now thanks to our beloved Mayor, that's the minimum fare for travelling just ONE stop!

Iain, far be it from me to criticise, but didnt you author a piece about the A list saying it should have mature, experienced candidates on it? And I think you will find that Lady Thatcher was only 65 when she was forced from office.....Ming is hopeless I agree, but is it his age which is the issue?

Anonymous, it's a joke - a slightly weak attempt at humour. You're right about the article. Age shouldn't be an issue but I think in Ming's case it is. No one really thought of Mrs T as 65, or indeed Michael Howard as 64, but Ming seems a lot older than 65.

Anonymous, it's a £2 one day bus pass. Not a train ticket.

The train ticket would have cost around £2.70.

The beloved Mayor has put prices up, and the service has got worse! Hurrah

Nothing to do with him being 65, he's entitled to all that at the courtesy of the English taxpayer because he's Scottish.

At 65 Menzies Campbell is clearly more competent than say David Cameron, who has amongst his team (this is the A list) of future parliamentary candidates Adam Rickitt, whose he?, was my reaction when I read the Sunday Times, well its seems that he is a heavy weight political thinker having had many articles written about him in such magazines Soaplife, OK magazine etc

Dammit Wonko - you took the words right out of my mouth.....

BTW, is Ming as old as Mick Jagger, Cliff Richard or Paul Macca?....... If so, maybe Heather Mills will tip her wooden leg in Ming's direction?

I think Ming's bestest birthday pressies would be a decent scriptwriter, an injection of timing - and an extreme charisma lobotomy ......

Ming's problems aren't anything to do with age particularly - although he does seem to have slowed down a little in the past couple of years.

He's not up to the job. Simple as that. He's certainly less competent than Cameron - who is still a flawed performer - but Ming simply can't hack it at this level.

If the LDs want to bury their heads in the sand until after 2009, I'd be delighted - as would the Tories. The fact is that Kennedy led them to the high point - the peak of their political achievement. With a Tory party resurgent, the Lib Dems are going to end up in 2009/10 with fewer seats than they have now - not a prediction I would have made this time last year.

They can thank those far-sighted senior members who dumped Kennedy to suit their own agenda.

What intrigues me is that Ming was near universally admired when he held the foreign office brief, and our lot and the other lot would routinely ask what on earth he was doing being a Liberal when a bit of floor crossing would do him a world of good. So, what went wrong?