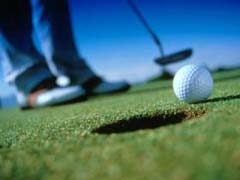 This afternoon I joined King's Hill Golf Club at West Malling. In the late 1980s and 1990s I used to play a lot of golf and got my handicap down to 18, but what with one thing or another I just haven't had the time over the last few years. A couple of years ago I bought a new set of Wilson Deep Red Clubs but just haven't used them much. That's going to change. I played my third round of the year this afternoon and after a very shaky start (8 and 10!) I got into the groove, shooting a birdie on a par 3 (gaining me 5 points on the Stableford system - unheard of!) and a par on the next par 3. I ended up scoring 49 on the front nine, which bearing in mind the first two holes was quite an achievement. We decided to stop after nine as it was very wet and windy. Don't worry, I shan't bore you too much with my golfing exploits over the summer - well, I will if I do well! But if any of you fancy a game and you don't live too far from Tunbridge Wells, let me know!
Posted by Iain Dale at 6:58 pm

Do you fancy a round on the Strand Pitch and Putt in Gillingham?

I played a game of golf once. I met a very nice bloke, an American, ex-Master Sergeant USAF, who took his veteran's education grant at the University in Scotland I was at, since he had married a Scottish girl while he was based here. He was a very keen golfer, so I asked him if he would show me how to play. We went out with a friend of his, a Catholic priest. After 32 strokes, I was half-way down the first fairway. The priest told me I was holding the club wrongly, and showed me how to do it right by placing his hands over mine on the club. As he was walking away, I took an almighty swing, missed the ball, and hit him right under the chin. He was lifted off his feet, fell straight on his back, blood pissing out all over the place. Fortunately, I was not struck down with a thunderbolt, so we rushed him off to hospital, with me apologising profusely. He was very forgiving, but I decided not to risk going onto a golf course again. I drove off in a daze, and went into the Uni, and found I had been awarded a First. Talk about a day of swings of emotion! Anyway, I have never tried to play golf since. I envy your competence, but you seriously do not want me anywhere near you with a golf club.

I don't know how you managed to fit nine holes of golf in between stints at the keyboard!

Haven't seen a good swing in South Shields since 1980 when we elected four Conservatives to the old Tyne Wear County Council!

I thought you were a member of RTW?

Good round considering lay off.

I am periodically in your area so would welcome a round if we can find a mutually convenient date/time.

If you ever travel east, you(and friends) are welcome to join me for a round at Hindhead GC. Lots of heather, trees and v scenic. One place where golf will not be a good walk spoiled.

i dont think so.

u didnt score on the first 2. that means you need to have scored 49 off 7 holes. on the S system - that means 7 points per hole. even if you repeated your 5 points on the par 3 7 times...

inconceivable, as you will realise.

u shd try a round with clinton, hes scores like u.

Anonymous, I scored 49 shots in 9 holes (including an 8 and 10 on the first two), which translated into 21 points in Stapleford.

Polly Toynbee would call me a 'pendant' for this stricture

I did wonder about that as I typed it. I have now corrected it. In answer to your previous post, I was a member for RTW for a year (you are very well informed!) but when I was selected in North Norfolk I let my membership lapse. I's only played about twice anyway. let me know when you;re around here and maybe we have a swift 9 or 18 holes!

I love the way people add West Malling after King's Hill to try and make it sound nicer...

You is dead posh Iain! What's wrong with Poult Wood? Closer and cheaper.

I once looked round a house backing on to the 'West Malling' golf course, they wanted to charge an extra £100K(ish) for a view of the golf course!

I'm not sure I've got the 'outfit' for 'West Malling' but if you ever fancy slumming with us prole's let me know.