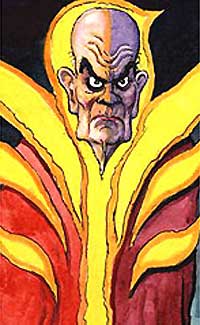 Sometimes you've just got to realise it's going to be one of those days. I would not have liked to been in Lady Elspeth's dressing gown this morning as she prepared Ming's egg and soldiers. She must have tired of the old boy spluttering over his copy of the Daily Telegraph, as he inwardly digested the awfulness of the YouGov poll. It showed the LibDems on 16% and told their leader that only 8% of people thought he would make the best Prime Minister, the lowest score for any LibDem leader since the Party was formed. Contrast that with the ratings for the man a quarter of a century younger who leads the Conservatives and it is easy to see why Ming was not in the best of moods as his car carried him to visit Charing Cross Police Station this morning. It was the first part of a day in which the Party hopes to show that it is not soft on law and order. My spy at Charing Cross tells me that things did not get off to a good start. Only one camera and two photojournalists showed up, and the first thing they filmed was the LibDem leader getting out of his car and immediately stumbling. Luckily he quickly regained his composure. Apparently one of the journalists present found it deeply ironic that the LibDems were having a law and order day on the day after it was revealed they might have to repay a £2.4 million donation from a man who faces a very long stretch in prison. Happy days. I recall something Iain Duncan Smith said, which will be very worrying for Ming. He reckoned a new leader had 100 days to imprint themsleves on the public psyche. Whatever the public thought of the leader after 100 days would remain with them for the rest of their tenure - and IDS should now. I'm afraid the prognosis for Ming doesn't look good. His first 100 days are up in mid June. So he's got around a fortnight to dispel the image of an ageing, bumbling, tired man who is rapidly losing his grip. I have to say I would never have believed it. Hat-tip for cartoon to Steve Bell
Posted by Iain Dale at 9:45 am

Just one thing - Ming has been leader (acting or not) since early January. I think he's had more than 100 days now. He is finished.

Unfortunately for the Lib Dems their great white hope is a bit of a dope if last night's Question Time is anything to go by. In my opinion, Nick Clegg came over as priggish and pompous, telling off Niall Fergusson for not thinking correctly on marriage and divorce and announcing; "Ihaven't been to Iraq, but people have reported back to me..." Reported back to him? Is he the Prime Minister already?
The star of the show was Tory Vice Chair Sayeeda Warsi. No positive discrimination needed there.
Incidentally, have you noticed that despite efforts to get a "balanced" audience, week after week, New Labour people get the bird. Great stuff!

Don't talk soft, Clegg was excellent. How could anyone not tell Niall "Neil" Fergurson off? He's a complete shit.

Jack, I agree. Nick Clegg was very good - I can imagine the thoughts which were going through the minds of most LibDems. I also thought Sayeeda Warsi was excellent. Hoon was looking very contrite. As well he might. I thought Niall Ferguson came across as a bit too clever by half. Oona King? Why on earth was she on at all?

I think King is trying to relaunch herself as a media tart. Given Dainna Abbot's recent absences from This Week maybe King's got her eye on that slot?

Liberal Democrats are the slus of the political world - whats the point of either of them?

At least you can drown slugs in a beer trap to keep them off you plants!

Iain, Niall Ferguson is a bit to clever half

I agree with bebopper in that I wasn't impressed with Clegg at all - he's certainly not the Blair/Cameron type he's billed as being. Not an obvious leader.

Sayeeda Warsi got better as the programme went on - I was very impressed with her comments on the Home Office/immigration/crime situation.

I agree with Iain that Mr Hoon was hopeless.

I saw Ming on Sky this morning and have to ask what is it with Scots politicians and the nervous tics? John Reid does the neck thing as if he's got a wasp under his collar and Ming spent the whole of his Sky interview doing a shoulder thing and a chin thing: shoulder back, chin up, shoulder forward, chin down. Too many fried Mars Bars if you ask me.

Tell the fact that the Lib Dems appeal to no one to the likes of Tim Collins, Stephen Day, Adrian Flook, John Taylor and others. The might be surprised to hear it.