There are Some Things Money Can't Buy... 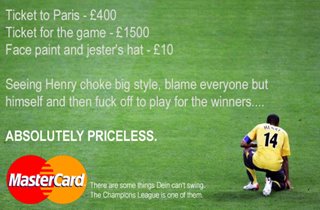 Oh... Henry's one of the only Frenchmen I like.

A true illustration of manly determination and the possession of true grit Roy of the Rovers 'no syurrender' DNA was perfectly demonstrated by the great Stevie Genius in Saturday's FA cup final.....

Compare and contrast that display to last night's Gallic shoulder shrugging, whinging and moaning from Arsenal's pampered Tee-airy Onree - and you sort of get the picture as to which one is a true world Superstar.

I wouldn't swap Stevie for anyone - and that includes Plug from the Bash Street Kids lookalike, Ronaldhinio.....

Less than a week ago, you were praising the conduct of Liverpool and West Ham, saying that the only winner of FA Cup final day was Football itself. Now you put rubbish like this on your site. Thought you were above this Iain.

Kathryn, try to find your sense of humour, as you've obviously lost it somewhere along the line. The subliminal point here is that Arsenal - and Thierry Henri in particular - should learn the art of losing gracefully. Instead of bleating as Wenger and henri have done, they should look at their own conduct a little more. 63 red cards in 9 years since Wenger became manager. What goes around...

Shame on you Iain. As a Tory, you should be a patriot and that means cheering on an English team when they play against Johnnie Foriegner. OK Arsenal are a French team with a French manager, but they play in an English league.
I'm trying to explain your lapse from patriotic grace and maybe the answer is with your Christian name. Do you admit to being a Scot?

You're spot on about Henry, though. He piles up the goals against the likes of Sunderland and West Brom, but take him abroad to play the big boys and he doesn't want to know. The Barcelona people are not stupid; they must be having second thoughts.

As a Spurs fan, I still havent recovered from recent events, I was just glad you guys didnt go on to win the cup if Im honest. But the way Arenal lost, and then moaned about it was hillarious.

I think all Spurs fans look forward to meeting the Arse in the uefa cup at some point in the not too distant future...

Surely you can see that the anger of Arsenal fans is justified when the referee even admits that Lehman shouldn't have been sent off and most everybody agrees that the 1st goal from Barca was offside. In cases such as these, blaming others can be forgiven?
Also, Henry doesn't deserve to be slated in that fashion, irrespective of what it does to help local rivalries/hooliganism. Finally, what does that puerile ad have to say about red card offences on the pitch? Nothing.

"..then fuck off to play for the winners"

As ever, with the predictions on Iain's blog, it is more a case of wishful thinking. The reality is so much harder to bear, eh?

Still, I suppose you have recent experience of just how close you can be to grabbing the big prize, only to find it snatched away from you near the end.

Let's face it, to support West Ham, you clearly already have a finely developed sense of humour. You just have to accept that Arsenal are on the A-list, and you're not!

This is probably a minority opinion (of one, I imagine) but the official's handling of the Lehmann incident almost cost Barca the match. If the referee had played the advantage, Barca would have had a goal to cement the fact that they were finding their rhythm. When Lehmann was sent off, Barca lost that rhythm, and the the Arsenal played as if they'd got eleven men through a burning sense of injustice (as often happens after any sending off). Growing fatigue only cost them the match after Larsson had gone on as a substitute, and set up two goals within four minutes.

Some might say that Lehmann would have saved those goals, but Almunia looked just as good as Lehmann.

Henry's also wrong to whinge when Eboue should have been sent off.

On the other hand, he conceded that it was 'probably' right to have sent Lehmann off.

It would have been interesting if the referee had played on, allowed the goal and given a yellow. As anonymous says, I think Barca are the better side and would have gone on to win, perhaps comfortably. But the early sending off slightly cheated neutrals such as me (with a slight bias to Arsenal but respect for Barca) out of seeing the "real" contest.

Arsenals were exposed for the dirty, diving tricksters they really are. It is the referee’s decision to either play advantage or to stop the game immediately the fowl has been committed; he did the latter, and was not wrong in doing so. Eboue is absolute disgrace and should have been red carded; it was the most appalling dive since the Pires penalty box tumble. Barcelona’s goal might have been marginally offside, but it, unlike Eboue’s dive, was intended to deliberately deceive the referee. Arsenal are an English club, but I shan’t support them whilst they’re cheating like a European one.

Has the Secretary of State for the Environment seen this? Poor bugger.....was missing from his Miliblog for two days, must've had a prior "official" engagement in Paris....tee hee :)

Kathryn,are you Arsene Wenger in disguise?
The cynical often dirty Arsenal team got what they deserved.
It is quite funny if entirely predictable to watch Wenger complaining as hard as ever 'though.

"...to stop the game immediately the fowl has been committed..." cluck,cluck

Henry has just signed a four year contract with the Gunners. Made a prat of yourself yet again!

Hmm, suppose the ref could have allowed the goal, and given Lehmann a yellow card... if he was prepared to make up his own entirely new rule, that is...
That wasn't even what Henry and Wenger were whingeing about anyway. Was more the "offside" goal which was, actually, onside - and the fact poor Terry was being kicked, when his own mistimed challenge was lucky only to get a ywllow. As was Eboue's, even before his second yellow card-warranting double-pike-with-twist which led to the opening goal...
Ah well. Funny, though...

The best line being the last one...

His own entirely new rule? No, merely the advantage rule.

I say this when I really dislike Lehmann, and really wanted to see him red carded for the times (at least two, in my recollection) when he's physically pushed players over (or tried to).