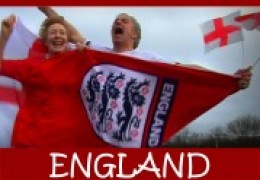 Now I promise you this isn't a lie. Neil and Christine Hamilton have recorded a World Cup song and video called 'England are Jolly Dee'. I just downloaded it from www.audioville.co.uk and I have to say it is frankly hilarious - and rather catchy. There's always one song which captures the mood of the nation during a World Cup and I wonder whether this might be it. It's hardly 'Three Lions on Your Shirt' but it actually reminded me of 'Captain Beaky and His Band' - and that got to number 1. Be warned, this song and video are going to haunt you over the next six weeks.
Posted by Iain Dale at 7:49 pm

If you have wasted 79p downloading this, I can only assume that you have money to burn.

I might have expected a little more reverence at this sad time; Guido has been in respectful mourning throughout the day - just one very serious and melancholy post. I find your juxtaposition of trivial jocularity with heartfelt tears rather undermines the depth of the latter.

I find Neil and Christine Hamilton gut-wrenchingly ectoplasm-inducingly embarrassing. Two of the world's archetypal losers who have traded any shred of self-respect for some mucky cash raking.

They lower all tones.

ps. I doubt Eric Forth would have been remotely entertained

Can these two morons stay away from the civilised world?

You do have some prissy posters on here. Judging something on its merits rather than by who produced it?

You are clearly insufficiently prejudiced----an odd crititism on your own blog.

It might help to remind voters why we need a great big blue encyclopaedia of Tory sleaze! There could be some cash in it Iain, go on, you know you want to....

cmd: "I find Neil and Christine Hamilton gut-wrenchingly ectoplasm-inducingly embarrassing. Two of the world's archetypal losers who have traded any shred of self-respect for some mucky cash raking."

Pretty much defines today's 'celebrity' obsessed culture and the values it holds dear I'd say. At least they are good for a bloody good laugh - and don't mind laughing at themselves either it seems.

Neil Hamilton was never found guilty of anything either, as I recall. Just couldn't prove his innocence to the satisfaction of the tabloid guardians of public morality once that paragon of virtue and fiscal rectitude Al-Fayed had made his disinterested allegations.

Sabretche, I think there's a gulf between the good old fashioned ho-ho-I-can-laugh-at-myself sense of humour... and the outright lack of self-respect, dignity and feather-my-nest village idiot role they have cast for themselves.

Don't know about you.
It all makes me feel most uncomfortable!

cmd: "Don't know about you.
It all makes me feel most uncomfortable!"

OK - me too I guess, but frankly no so more than dozens of other 'B' list so-called celebrities that grace much of our advertising and 'reality' type entertainment industry. Speaks volumes about the 'culture' that panders to them and makes it all possible. (try the pratts who front those 'everything must go - last day - hurry - never again - half price - nothing to pay for the next millenium type furniture sales for example; which half the population must actually find convincing - yuk!)

We're in agreement. I just fear the country is descending into a Mediocracy where lowly nobodies become role models and excellence or quality are side-lined. It's already happening and it's a tragedy.

The Hamiltons ran aground because as George Carman famously said of them at the time - "you are on the make and on the take".

They had champagne tastes but lemonade money - and didn't know where to draw the line. Ultimately, they brought it on themselves.

"Neil Hamilton was never found guilty of anything either, as I recall."

Not sure about that, mate. The Downey report found 'compelling evidence' that he'd taken cash for questions, and then in 1999 he was found by a High Court jury to have taken money from Mobil, lost the appeal and had to pay the legal costs.

He was a Tory in the 80s - wasn't it mandatory to be corrupt to get into the party in those days?

Don't get me wrong. I'm not in the business of defending the Hamiltons.

However, publicity surrounding the Mobil payment was in the context of a libel trial which he himself had instituted. He was not charged with, let alone found guilty of anything. He just didn't succeed with the libel claim - largely because of that payment it has to be said - but the alleged terms of which he disputed.

The Downey report did indeed say that, but Hamilton was given no opportunity to dispute that 'evidence', neither did the report go into detail about what exactly it was and gossip filled the gap. What could not be achieved through the normal standard of 'beyond reasonable doubt' therefore, has certainly been achieved 'by other means'. It's become part of the sleaze mythology; but personally, I have no doubt that the present bunch have honed financial corruption to a fine art and on a scale that could only be dreamed of by the likes of the Hamiltons.

The most appalling news I've heard for several minutes.

Compared with the speed with which Oaten has got into the the BBC cash trough they are rank amateurs!