Eric Forth: A Personal Obituary 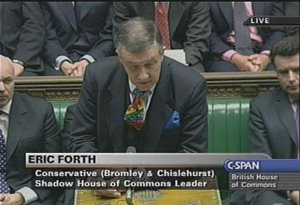 Eric Forth, who died last night, was someone I am proud to call a friend. Indeed, if you were a friend of Eric's he was the most loyal friend you could wish for. And the mark of a loyal friend is that he will tell you the truth, even when it is uncomfortable. I am sure his career will be covered in many other obituaries so I will restrict myself to some personal observations. I first met Eric at a Bournemouth Party Conference in 2002. He, David Davis, Eric's American born wife Carroll and I went for dinner at a restaurant Eric knew in Poole. Up until then I only knew what I had heard about Eric. He was a wonderful dinner companion, a great raconteur and slightly to my surprise I found him to be a great political strategist with an acute political brain.

Eric had a 19th century approach to constituency politics. He never, ever held a surgery, yet his majority increased at every election. He believed he was in politics to be a Parliamentarian, not a quasi-social worker. And even his most bitter opponents would admit he was a Parliamentarian of the first order. He knew how to work the system and to hold the Executive to account. He and John Bercow did more to hold the 1997-2001 Blair administration to account than anyone. They proved to be a real thorn in the side of many a Labour Minister.

The job Eric loved more than any was his tenure as Shadow Leader of the House of Commons under IDS. He was a true House of Commons man and he made Business Questions a 'must attend' session for MPs of all parties. He knew the writing was on the wall when Michael Howard became leader and took his departure from the Shadow Cabinet with good grace.

Eric loved America. He married Carroll, who hails from the US, and they had a holiday home in Florida, where they spent an increasing amount of time.

Eric was hardly what one would call a classic 'Cameroon', yet I know the two of them got on rather well. It is to Eric's credit that over the five months of David Cameron's leadership he largely kept his reservations to himself. David Cameron made a point of talking to Eric and explaining what he was doing and Eric respected it. His views on such things as the 'A' List were more or less unprintable, and it is deeply ironic that it is from the 'A' List that his successor will be chosen. Part of me thinks he would be chuckling at that - as well as throwing his garish ties out of the pram!

I haven't spoken to David Davis yet, but I know he will be utterly devastated. Eric was his most loyal friend in politics. That quality of friendship is rare in politics. Eric was one of the few MPs who would tell DD to his face exactly what he thought. He was very critical of DD's decision to stand aside in 2003 and allow a Michael Howard coronation and to this day believed it was the wrong thing to do. Eric decided that he shouldn't play much of a role in the 2005 contest because he felt his divisive reputation would damage David. So he took a back seat. DD and his allies have lost a great friend today.

My lasting memory of Eric will be from a dinner David Davis held in January to thank all those at the centre of his leadership campaign. Such a dinner would not have been a proper celebration without Eric. During his speech DD issued a rallying call to everyone to ensure that David Cameron received their full support and this received a genuine cheer. He ended up proposing a toast. Everyone raised their glasses. "To the end of Blairism," said DD. "To the end of Blairism," bellowed everyone else. "Especially in the Conservative Party," shrilled Eric Forth! A moment I will treasure.

Please do use the comments section to record your own tributes and recollections of Eric. I will print them off and send them to Carroll at an appropriate point in the future. Tim Montgomerie's obituary is HERE.
Posted by Iain Dale at 9:30 am

An enormous loss to the Party and the country. A true patriot, a gifted parliamentarian, a convicted politician. He shall be missed, and I send my sincere and heart-felt condolences to his family and friends.

How desperately sad. Eric's ability to lay into the rabble 'running' the country has been one of the few pleasures of political life over these last dark nine years. In a round about way he served me as a Brentwood councillor back in the 70s, not that I remember it.

Not of my party, but a great Parliamentarian with the utmost respect for the House and its sovereignty - very few people know more about Parliamentary procedure etc than he - and he applied it with wit, conviction and charm.

I heard him speak to the Lobby Lunch Club a few years ago, and he was fascinating, funny and far from the usual politically correct banality all too often found in that particular environment.

My thoughts are with his family - his passing will be a huge whole in their, and Parliament's, lives.

When the Conservative front-bench was wearing sackcloth and ashes, apologising at every turn, letting our woeful government get away with political vandalism and harmful meddling, Eric Forth fought New Labour in the green leather trenches.

I was proud to have Eric Forth as my MP.

It's very sad to think I'll never see Eric, grinning like Mephistopheles, queuing for a coffee in Portcullis House or glowering at the Government from his traditional slouching point on the Tory benches. A sketchwriter once described one of his ties as depicting an explosion in a fireworks factory during a hawaian sunset... I always thought they were a conscious assault on blairite fashion sensibilities. But above all he was a true 19th century parliamentarian. Utterly independent of view, quite unafraid of anyone, and unfailing contemptuous of conventional wisdoms. And above all ruthless in pursuit of his aims. I don't just mean his eloquent and ideologically illuminating speeches, talking out any number of vexatious and ideologically flabby private members bills. I mean his role in the destruction of IDS's leadership, in which he openly dissed his boss, as he debated with Blair at PMQs one week - a moment at which I suspect IDS's public slide towards doom really began.

He did a talk at my university back in either late 2000 or early 2001, and I have to say he was the most charismatic MP I have ever met in person.

To my regret I didn't know much about Mr Forth, but from what is being said about him here and elsewhere Parliament has lost a great MP.

I'm sure his friends and family will miss him greatly.

I endorse every word written by nukelabour. He possessed the greatest of all human qualities - courage. Many of his fellow MP's were gutless and gormless immediately post 1997 defeat - always apologising and explaining. Eric Forth was not of this ilk. What he believed he said without fear or favour. He was not a show pony but a real warrior. RIP

A great loss to Parliament but more importantly a very great loss to England and her people. Eric was one of the very few politicians that I admired, aq very sad day for me.

I met him when he was the junior Education Minister - he was rude, arrogant and pompous but you could not help but like him.

I had the pleasure of meeting Mr Forth at a dinner held in his honour not two months ago. When he found I was Cumbrian (and late!) he came over and informed me that he was good friends with my former doddering Labour MP!
What a man! Such wit. He brought the house down with his speech which was a mix of humour, humility and grave seriousness. Needless to say, he re-iterated that he believed in Parliament.
He did a great Q&A afterwards and I had the chance to talk America with his wife. My sympathies to all his family and many friends.

When I heard the nes this morning on Radio 4 I couldnt believe it. Eric Forth MP is one of my heroes of Parliament and for him to be gone is truly a massive loss to not only his own constituency and the Conservative party but also to the nation as a whole. I had the very great honour of meeting and chatting to him at the same dinner as Harley did and he was without doubt one of the most approachable and honest men I have ever had the pleasure to meet. My heartfelt coldolences go out to all of those who knew him, for there was surely never a man on any side of the house that could speak ill of Eric as a human being, he was a truely wonderful man and great Parliamentarian. A sad day for politics and a truly sad day for Britain, rest easy Eric you will be remembered not only as a great man but as a formidable and great politician who had the respect of all.

One way you can spot a great man is that he has time for those at the bottom of his profession's ladder, and Eric was one of those. His ability to communicate and thereby influence important issues and make politics relevant and interesting is increasingly rare at present. The greatest tribute his Local Association could pay him would be to show similar independance of thought as Eric and - having allowed any Conservative Party Member to apply - choose his successor purely on the basis of ability, and so not necessarily from those currently on the A-List.

An awful loss to the Conservative party and the House.

An excellent Conservative, someone who I deeply admired and a solid principled member with excatcly the right attributes an MP should have.

After meeting Eric on a number of occassions its awful to think this could happen so soon.

RIP Eric. Thoughts go to Eric's family and friends in their loss.
He will not be replaced in his constituency with his like and that is England's loss.