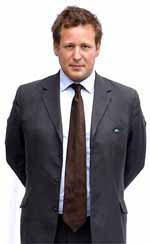 Ed Vaizey has written an interesting piece for The Guardian today. For the first time a leading Cameroon makes a direct overture to the LibDems about a possible coalition.

Secondly, and far more important, the elections show that the Liberal Democrats made a huge error in choosing Menzies Campbell as their leader. He will not take them through the glass ceiling. They have stalled. Their most talented MPs - David Laws, Nick Clegg, Vincent Cable, Jeremy Browne, and others - must now think seriously about which direction the party should go in. It is time they sat down and looked at the refreshed Conservatives, and decided whether, in the run up to the next election, they position themselves as the guarantors of a discredited Labour government, or part of a coalition to renew British politics.

He's right. it's a stark choice the LibDems will face. Ming Campbell has made it clear he would only engage in discussions with either Party AFTER a General Election. But I suspect some of his younger Turks may well want to nail their colours to the mast earlier. Ming's nightmare is that some will want to go one way and some will go another. What do LibDem readers think of the likelihood or desirability of a Tory/LibDem coalition after the election? I would rather stick needles in my eyes, personally, but I do recognise that with the electoral system stacked against an overwhelming Tory majority, it is something both LibDems and Conservatives are going to have to think about.
Posted by Iain Dale at 1:17 pm

How much are you betting any coalition deal would be on the condition that the Lib Dems get some degree of proportional representation? Bad for Tories, bad for the country and I want nothing to do with it.

There's no point talking about coalitions with the LimpDums. If Laws Clegg and co feel comfortable supporting tory policies they can come and join us and stand in their current seat at a by-election, or they can stick with the left wing party they joined. They can't have it both ways.

There are few categorical truths in politics, but this is one: There is absolutely no way that the Liberal Democrats will ever agree to enter a coalition with the Conservatives without PR.

"If Laws Clegg and co feel comfortable supporting tory policies they can come and join us and stand in their current seat at a by-election." - kingbongo

No, they can stand down in their seats and allow the Conservative PPC who is already there to run as the Conservative candidate. They would have to find new seats - which would be something they wouldn't do - so it's not going to happen.

How cute is this picture of Vaizey!

Chris, grow up a bit.

There are MPs, like Laws, who could probably sit pretty comfortably alongside Cameron himself, though the idea that they would want to have anything to do with the likes of Forth and Rossindell is unlikely. If the party ever hinted at a coalition with the Conservatives then they would undoubtedly alienate a lot of activists and give a filip to Labout come election time. Similarly, propping up an unpopular minority Labour Government who have made it their mission to wreck our liberties for the past few years is not likely to be especially popular, so either way talking about coalition isn't in our favour, and I don't see Ming being especially keen to put it on the agenda. If the time comes and PR is on offer though...

No. Coalition government is unaccountable government.

On balance after much thought I think I would prefer the'needles in my eyes option',bet you never thought I'd say that Iain!

Ted tried it with Jeremy!
Do the conservatives have to keep learning the same lesson?
Europe/PR-Forget it there's a bit too much of old Mr Vaizey showing through!
PS-after you with the needles

Oh dear, touched a raw nerve have I? How sad.

If you can't cope with me insulting dimby-Browne, then go somewhere else, or better still go and meet the guy and you'll understand why I'm right.

my experience,admittedly with the local council,is that at the first chance of power,the Lib Dems will jump at it.Then,as ever,they will realise they don't have a fucking clue about govt and will leave most major decisions to civil servants or the Tory clique.

As for PR,they'll probably find it'll be the death of them because it's raison d'etre is positive voting and the tactical voters will go green,tory,lab.

I have met him Chris, he's an intelligent and articulate bloke, which is probably why he won his seat.

We should show more confidence.

If the path we choose is the right one then the people we need to attract will follow us. If the more sensible Lib Dems want to vote with us because they agree with us, fine, but to distort our actions to placate some of the 30 or so Lib Dems returned after the next election would be crazy.

After a few moments thought: However the talk of coalitions gives the Lib Dems real problems - like coming straight on what they really stand for. It also helps unwind the anti-Tory tatical voting situation.

The PR question could be finessed with a referendum. So maybe .. (If Brown wields the knife in the next month the next general election could be very soon and coalition could be to everyones benefit.)

Chris, I'm sure Mr Browne would find your unsubstantiated and rather whacky accusations very amusing. Surely as the 'party of the environment' though, those Green votes would have been heading to you and not the Lib Dems anyway? ;-)

Chris, you seem to be the one with the raw nerves.

Im guessing you were at the end of a Lib Dem beating in Taunton.

Still, it seems like you're taking it well (accusation throwing aside...)

What is more, Browne is a thoroughly nice chap.

The Tories should not even countenance a coalition with the Lib Dems. It will only happen on a deal with PR; that is their non-negotiable condition. The Tories should focus on trying to get a high-profile defection instead.

Having had experience of a Tory/Lib Dem coalition in Brum (see the blog for the details of how well that hasn't worked), the idea of the 'progressive partnership' spreading to the rest of the UK fills me with dread.

The LDs would be only too glad to sacrifice their principles for a sniff of power - even a vague promise of a review on PR might be enough to bring them on board.

An awful lot of the new crop of LDs are quite right wing in any case - remember the Orange Book, anyone? - so a Tory/LD coalition is a definite possibility.

Believe what you want to believe dynamite, as will I. However, like I said before: Jeremy Browne won't be an MP in 4 years time, so he need not worry much over switching partys.

"The LDs would be only too glad to sacrifice their principles for a sniff of power." - PoliticalHack

Lib Dems don't have any principles to sacrifice. They are totally morally corrupt and seek office only for the sake of it and to keep others out.

Yes, yes, and all Tories are bloodsucking animals who hate poor people. Great contribution to the debate.

"What do LibDem readers think of the likelihood or desirability of a Tory/LibDem coalition after the election?"

After reading some of the ranting loon Tories who've posted comments to this entry, it seems a whole lot less desirable to this LibDem.

Some of the comments by Chris Palmer about Jeremy Browne are uncalled for, and wrong. Lib Dem - regrettably yes, "empty shell of a man" definitely not, he's a far pleasanter human being than many MPs.

Smarter Tories are the ones who realise they will need us more than we need them if they don't have an overall majority. Remember, any swing over 3% gets Labour out, but you need over 12% for a majority. Cameron knows this - hence the overtures. So perhaps you should stop insulting us, and wake up and smell the (Fairtade) coffee!

Chris, remember that the boundary changes make Taunton slightly safer for the Lib Dems next time

Alot of speculation about the Lib Dems here..What is certain that alot can happen in 3 years whether ming is still leader or not and they will hold the balance of power at the very least in particular to the liberal democrat resurgence we are seeing and going too see more of in the USA which always and will have an impact here in the 51 state.UK..

Jermy Browne is far from being an empty shell as many people know and are increasingly hearing/and liking him in our Party as his profile grows..

Chris Palmer spoke passionately about Jeremy Browne, MP for Taunton and how he would not be around after the next election.

Having had the pleasure of talking to both Mark Formosa Conservative PPC and Jeremy Browne MP I know whose views I consider more acceptable in the 21st century.

I must admit I did laugh at the comment that Jeremy Browne did anything to get his photo in the local newspaper. Did anyone see Mark Formosa hugging a rabbit lately? The words Kettle and Pot come to mind.