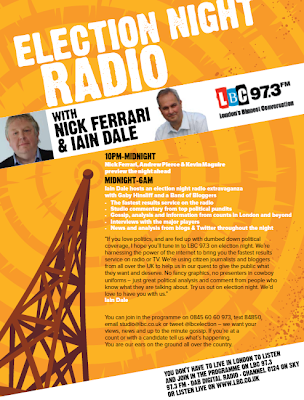 Click on image to enlarge
I've been spending a lot of time working on plans for the election night results programme on LBC, which I am presenting. Nick Ferrari gets LBC's coverage underway at 10pm with a preview of the night to come, and I take over with Gaby Hinsliff, at midnight and will be broadcasting right through till 6am, when Nick Ferrari returns with his breakfast programme.

Those of you who listened to my programmes last year on PlayRadio for the County Council and European Elections will know that I do not like to have a script! I also like to involve as many people in the programme as possible, and that's where you come in. Although we'll have access to LBC and Sky's election count network, and will be taking live reports, I want our programme to be very different from the normal election night fayre.

Like last year, I'd like to involve bloggers, tweeters, blog readers and citizen journalists in the programme so we can get the very latest information, gossip and rumour as quickly as possible, and ensure that we get the results - or indications of results - quicker than the BBC or the others.

So if you'd like to play a part, if you'd like to report from a Count in an interesting seat, email me and nearer the time we'll let you know how you can feed information into us, or even come on the air.

The programme is being pitched to appeal to politicial afficionados as well as the LBC general listener. We're not going to dumb down - there won't be anyone in the studio dressed up as a cowboy and we won't have fancy graphics. We also won't have a formal script. We're relying on our political knowledge, interpretation and excellent guests to bring you the kind of election night programme you won't get elsewhere. I'm delighted Gaby Hinsliff has agreed to co-host - she's got fantastic contacts, is a brilliant journalist and will bring a huge amount to the evening.

If you have ideas about what you'd like to see us do in the programme, feel free to let me know.

Finally, we intend to have what we're calling a BAND OF BLOGGERS with us, in the studio and LBC newsroom on the night. They will be trawling blogs and the internet for the very latest news and comment, and will all appear on air from time to time.

Also, in case you think you can only listen to LBC in London, think again. As well as being on 97.3FM in London, it's on DAB in a lot of the country, on Sky Channel 0124 and you can also listen live throughout the world via the LBC website.

As I will be at home (and will try and get a results feed) what I will try and do is produce an updated forecast after the first result, and then every either 32nd result or 65th result (depending on how I manage) would that be of interest to you?

If you need a UKIPer for anything specific just lemme know.

Iain said to us: "Nick Ferrari gets LBC's coverage underway at 10pm... I take over with Gaby Hinsliff at midnight and will be broadcasting right through till 6pm, when Nick Ferrari returns with his breakfast programme."

So you're doing a radio programme that lasts 18 hours? Bloody hell Iain, we knew you were a media whore but that's really something! ;-)

and will be broadcasting right through till 6pm, when Nick Ferrari returns with his breakfast programme.

Why is Mr Ferrari doing a breakfast programme when most of us will be eating our tea?

The curse of Brown strikes again. Ian Martin points out that 3 days after his visit, 'Innocent Smoothie has been taken over by Coca Cola.

So just after extolling the virtues of the philosophy behind the company, and being pleased it had survived the recession, Brown sees it taken over by the multi national great satan.

I may hang around the East Lothian count, which is possibly going to be a Lib Dem gain from Labour, coming out of the chaos of Anne Moffat's deselection.

If I do, I shall be happy to let you be the first to know.

Listening to you this morning on LBC and heard several mentions that the national debt is £170 billion.

i can confirm reception in sweden via the web. Loud and clear, and beats being brain washed by BBC alone, tho I must say Up All Night is still my favorite program while Im on the road.

In the Euro/County Elections last year you suggested a plug for bloggers who reported the counts to you.

I included you in a Daley Dozen.

Dammitt! I can't listen on line for some reason!