Brown at Ten: New Book for the Autumn 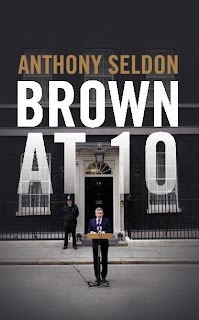 This week I signed up a potentially massive book for my company Biteback Publishing. Anthony Seldon has chronicled both the Major and Blair premierships in books published by Simon & Schuster. He's now going to do the same with Gordon Brown's premiership in a book called BROWN AT TEN, which will be published in late September. It is our lead title for the autumn and we have high hopes for it. Some idiot on Twitter thinks that because I am publishing it it must be an 'attack book'. Clearly he hasn't read any of Anthony Seldon's books in the past. Professional historians don't do 'attack'. It will be as near as possible to an official history of the Brown premiership.

You can preorder the book HERE.
Posted by Iain Dale at 11:39 am

Seldon is outstanding. His brief recent piece on Brown in The Guardian was a masterly analysis of the man's strengths and weaknesses.

How Seldon finds time for all his writing, broadcasting etc. whilst being full time Headmaster of Wellington College heavens knows. But he does it all with great aplomb. Good luck with the book Iain...

I know I've said it before, but I think that bloody man should concentrate on being a headmaster and not a media-whore. I'll allow that he may well probably be writing this book through the holidays, but I'm tired of hearing his squeaky oh-so-bloody-certain little voice popping up all over the place.

Shame on you for encouraging him ;-)

Lol this book should read as the biggest car crash in modern politics.

According to the Guardian piece, Selden reckons Brown is the most misunderstood leader since Pol Pot and Kim Jong Il, who "served his country with honour and good judgment at a time of grave national crisis"

Has this manuscript been submitted for peer review? Is it not possible that someone we have never heard of, someone who is not the darling of the chattering classes, could write something meaningful and of lasting heuristic value? The quickie publication smacks of an exercise in get rich quick ephemera. Look back in 30 or 40 years time and, yes, you may just be able to see Brown's Premiership in a meaningful context, but not today.

You obviously don't read the news much. After a whole spate of scandals and unfortunate incidents at Wellington College I think we can safely say in answer to your question that Seldon "finds the time" by paying no attention to his full time job at all. Rather than writing books he ought to be back in class learning leadership and management skills

You say the book will be published in late September (ie you are aiming for the week of the Labour conference) but presumably in order to recoup your investment you'll also be looking for lots of juicy and lucrative newspaper serialisation ahead of that. Labour leadership result on 25 September and voting up until the 22nd, so shall we be seeing some interesting stuff out there about the protagonists in time potentially to influence the outcome?

I agree that Seldon does works of record not hatchet-jobs, but you know the score and I don't believe you made this deal without regard to the timing vis a vis leadership election and the potential through serialisation and other leaks to cause some mischief.

It will be interesting to see if anything new comes out of it, or if it's just another exploration of familiar turf. But again I imagine that you had some insight into that question before stumping up the cash.

Looking at that picture - it shows just what a complete loon Brown is. Not only did he stand in Downing Street to resign, looking a helpless hopeless plonker -- he did it twice on consecutive days!

A pathetic image to be remembered by.

Congrats. You should sell literally thousands of copies to the few in the UK who actually give a toss about our polity!

But I mean my congratulations seriously as, tiny readership aside, this is likely to be an important book on UK politics for decades to come!

Someone in the Guardian comments points out that he wrote a piece in the Telegraph the previous day saying how dreadful Brown was!

I'm afraid I won't be buying this book...I simply want to forget that this man even exists.

Excellent cover, Iain. Impressive given how quickly it must have been knocked up.

Oh, really? My daily reads don't include the ups'n'downs of Wellington life, so I'll have to ask a 'parent' of my acquaintance. This certainly reinforces my prejudice, however. Seldon spoke at my sons' school prizegiving a few years ago. What a puffed-up strutter he is.

I understand that Seldon's response is as follows:

"There have been no scandals at Wellington College during Anthony Seldon’s headmastership – the one unfortunate episode has been now retracted from the press. Anthony is content for the parents, pupils and staff judge whether he gives enough attention to his work. It is not for him to say!"

All historians, inevitably, are presenting opinion. After all, interpretation is their game. Some are better than others, of course.

Alan Clark's works were meticulously researched - but his own views were apparent. I suppose the same can be said of many others. And Churchill can hardly be said to have been impartial.

Why anybody (except Paddy Briggs) would want to read what this Labour supporting twit (and paid up member of the Leftist establishment) says about anything is a mystery.

On the subject of historians: I've often thought that the rise to national prominence of the preposterous David Starkey is proof that you don't need the blogosphere to give an idiot a voice.

Proved my point, the man has no idea whats going on at his school.

Seldon excellent; Brown not. The most loathsome politician of my life - yes, worse than Ted Heath - I'll not be buying or reading.