Dedward Make it to the Final 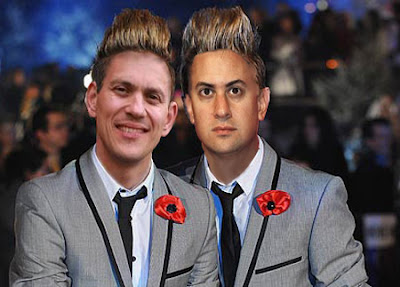 Hattip: Javelin
Dedward are still the only two Labour leadership contenders to gather enough nominations to make it through the final stage. Ed Balls still needs another ten, while Andy Burnham must be wondering how he can get to 33. As for McDonnell and Abbott, it's virtually imposssible for them unless the Labour Party National Executive changes the rules. Again.

I imagine that Ed Balls will make it, purely because the Labour Party just couldn't stomach having a leadership battle between two members of family dynasty. Just imagine if the same thing had happened in the Tory Party. The press outcry - as well as the Labour outcry - would be immense.
Posted by Iain Dale at 11:57 am

The labour party are in complete shambles.

This election process is laughable.

I hope Dianne Abbott can get enough nominations.

Without her I do think the whole Leadership election will be very dull.

So Diane Abbott doesn't get nominated. Does this mean that the Parliamentary Labour Party is "institutionally racist"?

I can see the headline now:


No change there then.

My apologies. Somebody seemed to have hijacked my laptop for a moment there...

Oh yes, and a very nice little graphic to accompany the post. Except that the two Milibands are even more irritating than Jedward and Louis Walsh put together.

Where did I put that bloody scythe?

Shoud that not be "Dead-Wood"?

Anyway, I think that the election of one of the Moribund brothers to this lofty position is highly appropriate. (One definition of moribund being "Declining, weak or stagnant" - coudn't have put it better myself).

They sbe changed. Its unthinkable that in the 21st Century Britain still hasn't got a black leader of one of its main political parties. The fact that Abbot is being denied a chance to even run in the race is itself a heinous crime against social justice.

Labour sbe ashamed of themselves.

Ed Millipede has been making a bravura performance in the Commons today [27-5-10].

And they all went to school at the same ultra socially exclusive school in Camden as Oona King .

Dead wood stage a contest nobody cares about. Calamity!

So what happened to the wimmins list that Hattie HarHarperson was crowing about. Why havn't the girlies been whipped to provide support for Diane?
Shameful.
Clearly LabourinWaiting are sexist and blatantly racist.
Who would have thought it given the welter of frothing invective that has emanated from the people's soviet socialist workers party.
Doubly shameful.
Diane to be put on the party list irrespective of nominations should be the people's cry.

Our leadership campaigns are always dull. The early frontrunner (Kinnock, Smith, Blair) stays in front and wins with embarrassing ease. It's why no-one bothered last time. This might actually be the first contest.

As for McDonnell and Abbott, it's virtually imposssible for them unless the Labour Party National Executive changes the rules.

I'm suddenly coming round the the idea of an all woman shortlist.

The best thing for Labour would be for Balls, Burnham and one of Abbott or McDonnell to get enough nominations so that there is at least the appearance of a wide ranging contest. I am certain that Balls and Burnham will get enough votes.

The reality though is that this will still end up being a fight between the Milibands albeit that Balls would present a convenient punch bag for them both to spar with during the contest rather than knocking lumps out of each other. In that sense Balls may actually have found a useful role for himself.

On an unrelated note there has not been much attention paid to the by election today. I will be fascinated to see whether the Libdem vote suffers although I suspect it will be in the cities and towns that that is the case rather than the country where, by and large, the LibDems are little more than Tories who don't have the balls to admit it.

1 it would give Labour a real choice

An all women shortlist would be of no help to Abbott as she isn't (a) male and (b) married to the Labour leadership.

Don't be so feckin' stupid. If you're really that concerned about someone's colour, perhaps you should join the BNP. They're obsessed with it - like you.

I do hope that Bananarama wins, then we can be sure that Labour are out of office for more than a generation.

It is incredible that he has even been nominated in the first place, after his appalling record of serious gaffs and comic cut poses.

@Jimmy. Quietly the leftie Michael Foot promoted Kinnock calling him the new Nye Bevan. But the rest of country knows him as the Welsh Windbag. But for Major foolishness of approving his name to EU commissionership put forward by Blair, he would have remaned a failed leader instead of getting his whole family hitched onto EU gravy train. As for John Smith, he was a Glaswegian who was never at home in London, and was a Socialist who thought that any salary over £26,000 was middleclass. As for Blair, we know him as Bliar.

The Labour Party NEC introduced these rules to prevent the left having a voice! So there's no chance of a rule change at this stage. The architects of NuLiebor are delighted to have snuffed out debate in which the left could participate!