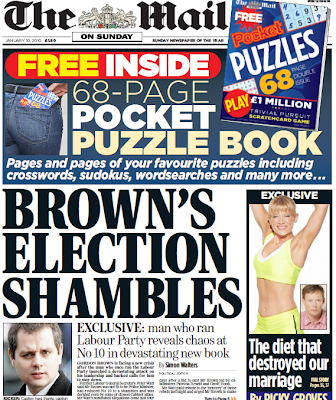 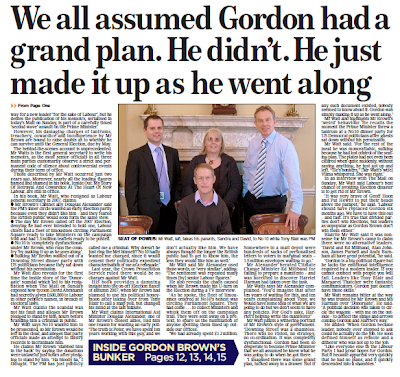 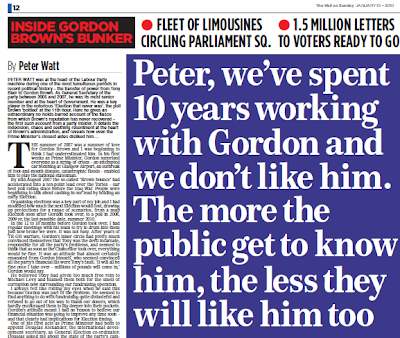 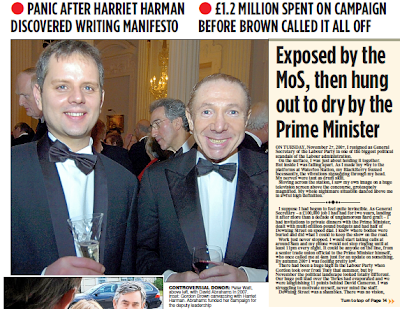 The Mail on Sunday are devoting six pages, including the front, to the Peter Watt story in tomorrow's paper. I'll add links when they are up on the Mail website but among the items discussed are these...

Peter Watt's book INSIDE OUT: MY STORY OF BETRAYAL AND COWARDICE AT THE HEART OF NEW LABOUR is published by Biteback on 25 January. preorder it HERE.

UPDATE: The Mail on Sunday editorial concerns the book too, HERE. Headlined - Glowering on his throne - The Mr Toad of Number Ten.

Hilarious! All the wheels seem to be coming off the Labour bandwagon at once.

The papers are also showing comments from Hoon how Gordo stopped him buying much needed military equipment. Watt is telling how mental McMental is, the wine is good, armchair is comfortable, the telly news is trashing Gordo, life is sweet at the moment.

Oh this is just toooooo good to be true! Absolutely fabulous reading! Bravo!

Brown's only defence might be to call an election. Or he is surely finished.

Gordon Brown has less change of getting elected than a poorly painted garden gnome.

Obviously losing such a loyal trustworthy, competent and sober individual has been a huge blow to the party. We'll just have to muddle through as best we can. I do hope the Hitler on Sunday paid good money for that drivel.

That is a little cruel to Garden Gnomes.

Wheels coming off fast for McGordo

@NB: Sadly there are some elements of Labour's client state that would vote for a non too polished turd with a red rosette, so a poorly painted garden gnomes should romp home!

Bravo on the book, Iain. I am enjoying watching this unfold.

Not at all. I am amused at a company bankrolled by Ashcroft publishing something sanctimonious about dodgy party funding.

I suppose they do say write what you know.

Jimmy, do get your facts right love. it is not "bankrolled" by Ashcroft. He has a 25% shareholding in it.

The sorry thing is, despite the shocking nature of these revelations, none of it seems a surprise.

Here's an idea for your next book:

I think Gordon overriding and cancelling new helicopters in 2003 (and ever since) is/will be very strong....like the moment he cancelled Britain's pensions industry in 2007, and undermined banking supervision, but that's all too long ago. This is recent.

He attempted to falsify minutes of meetings, calculated to spread suspicion on Watts.

The first few were criminal.

The last is a crime.

He was suspected of these things previously, but now the case for the prosecution has hard evidence.

We have a low grade crook running the country, who has brought it to its financial knees, to the point that nothing works. The media are frightened of his methods as are his colleagues, and even the opposition.

Maybe the move for him to be got rid of will this time keep growing until it's unstoppable.

It's obvious that Labour Ministers realise the game is up. Nobody wants the poisoned challace. They are now in damage limitation mode. They are all jockeying for jobs either inside or outside Parliament.

What must be going through their heads must be that they can't believe they are still so high in the polls. I bet you most would say that after the election. They would say "we were so crap, the country was almost bankrupt, spending needed to be cut by 10-20%, we were a shambles ... Yet still people wanted to vote for us."

I think they would conclude the best thing they had done would be to turn the Uk voters into Government dependents. They would say "if only we had targetted more marginal voters with Government cash instead of spending it on the core Labour vote we may have stood a chance". Labour Ministers will be regretting spending so much on poverty, immigrants who can't vote and welfare scroungers.

AND I have to agree it's true. They shoIld of done. I think what this proves is that spending money on your core vote will cost you 10 points in the polls .

I woudn't make too much of this

Its easy to say these things after he was sacked by the Labour party and given X amount of money by Lord Cashcroft and the Daily Mail.

I see Tory Zac " i don't want to pay my taxes" Goldsmith is in the news again any comment ?

What do you have to say of a political party which is 'bankrolled' by a few trade union leaders without reference to their members, and which in government arranges for those funds to be more than repaid by the taxpayer via 'development funds'?

And I'd suggest that the sources of Labour Party funding merit extremely close scrutiny. Take a look at Mandelson's recent activities. Oligarch, anyone?

Just thinking out loud, but how much (ballpark) would it cost for a local benefactor to post a copy of this book to identified swing voters in their nearest target seat?

"What do you have to say of a political party which is 'bankrolled' by a few trade union leaders without reference to their members, and which in government arranges for those funds to be more than repaid by the taxpayer via 'development funds'?"

I'd say, for reasons which I've explained to you at great length on more than one occasion, that this party existed only in your fevered imagination.