I Am a Great Man 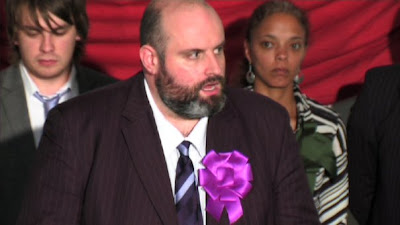 I spent much of today in front of a camera. Nothing new there, you may think, but you'd be wrong. This time it was to appear in a feature film! Admittedly, it's not exactly a starring role, but the experience was good - and different! - nonetheless. The film, which will be released in April, is called I AM A GREAT MAN and is all about a man, Leonard Cartwright, who forms a new political party, Publicus, which, after a general election, holds the balance of power. It's a drama-comedy, but shot as a "mockumentary". I play a TV news anchor who also presents the general election night coverage. I had to shoot in all in front of a green screen, so I can't wait to see the graphics they insert in the editing process.

I had to shoot six short clips at a studio in Camberwell, and one even involved a swingometer. I tried desperately not to do my Peter Snow impression. One thing I did learn was that I am hopeless at learning lines - even if it's just a couple of paragraphs.

A trailer for the movie will be released next week, but in the meantime you can find out more about it via their Facebook Group, Youtube Channel and Twitter feed.

The whole experience today has made me think about what I want to do on election night if I am not a candidate. It reinforced my desire to investigate the possibility of repeating last year's Play Radio experience - all I have to do now is find a radio station who will give me a studio and an internet stream, and then I can recruit my election night posse. Unless, of course, I am spending election night at my own count! We'll see.
Posted by Iain Dale at 8:19 pm

The guy with the purple rosette is Wonky Tom!

Who;s Wonky Tom? Anyway, he is the star of the film and is absolutely brilliant in the clips I have seen.

So lets get this right - voting for a third (or fourth) party stops the official opposition from winning and keeps the governing party in power? Hmmm ....

PS - did not the BBC do this years ago with a crappy series about a supermarket manageress becoming PM?

It's just the suit and shirt look about two sizes too big.

Glad to learn that you haven't given up hope on being at your own count.
For a while you were sounding a bit defeatist.

I am not and never will be a Tory, and I happen to think your abilities are put to better use in your current activities.

But some seats will become unexpectedly unavailable in the next few months. Someone who is up-to-speed in media savvy will be in demand.

It sounds as tough it is based a bit upon Phillip Blond...

Iain, many universities have media studies departments with radio and TV studios. Why not seem if you can get one of them to set something up? Student journos and techs are often very good.