Launching Peter Watt's 'Inside Out' 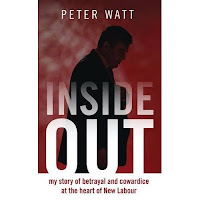 Last night I hosted a booklaunch party for Peter Watt and Isabel Oakshott at the City Inn. It was a fairly packed room. The highlight for me was meeting Peter's wife, Vilma, who I felt I already knew through the book.

One very strong theme which emerges from the book is the conflict between Peter's job and his family responsibilities. Those of us who get wrapped up in the political world sometimes forget what we put our families through. I, for instance, haven't been home since Sunday due to various work related activities. Peter details the strains on his marriage and I am pretty certain that if he hadn't left his job as General Secretary of the Labour Party when he did, his marriage may well have ended by now. It was a pleasure to meet his various children and mstep children. He and his wife also foster children, and as Michael White once said: "None of us are in a position to criticise Peter Watt. His fostering shows he is a better person than most of us will ever be." Or words to that effect.

I didn't expect to see many Labour MPs or party hacks there last night, but one MP who did turn up was Charles Clarke.

The good news is that the book really seems to be selling. Several people told me they had tried to buy the book at various branches of W H Smith but they had all sold out. That concurred with other anecdotal feedback I have had. We now have no copies left to send to bookshops - all 8,000 are spoken for, so we now have to decide whether to action another print run.

Amazon still have some copies left, so if you haven't got yours yet, you can order it HERE.
Posted by Iain Dale at 8:45 am

Did you not do a 3 print run forecast originally Iain? If you've accounted for the first already then a modest second is a no-brainer particularly considering the increase in margin. With general interest in politics amongst the non-political segment increasing over the next three or four months and, given the interest already shown I'd be bullish and go for another 6.

I read the book the evening it arrived in the post.

I was surprised to see that Labour treat their donors with the same distaste as they do us tax payers:

1. Together we donors and tax payers are just a source of cash. We are held at arms length in disgust, and only wheeled out as the means to pay for Labour politicians vanity or for the tribal war against the Tories.

2. Our money can be frittered at will. Since we are expected to cough up more cash as and when it is needed.

3. There is no concept of duty of care towards either donor or tax payer.

At least Peter Watt made an effort to run Labour's finances with respect, ethics and care.

Which top Labour dog's memoirs have you lined up for May 8th?

Mine was delivered yesterday. I'm half way through it and expect to finish tonight.

I do hope you took the chance to commission Charles Clarke's:

'Thoughts on Thirteen years in Power: New Labour and its Downfall'.

"whether to action another print run". (Wince)

What could stop you, a very well written narative with a strong story to tell, and not ony about the Labour, I bet the book has a few in the other parties checking the loyalty of some of their people.

Shurley Print on Demand is the way forward!

As an ex-navy man I am sorry but your statement about being away from family blah blah just doesnt wash with service personnel. Try doing 6 or 7 months away, potentially in a war zone (I did Gulf War one, away for 7 months and for the first 3 months working a straight 6 hours on watch, 6 hours off). I did a few other deployments of 6 or 7 months in my 28 yrs as well. Service personnel laugh at political types (and spouses) who complain they have to spend a whole Monday-Thursday away from their main home. Whoopee.

I was delighted to see that my copy had arrived at home today.

I'm looking forward to reading it this weekend.

I don't suppose that there is any chance he / you will be at the Oxford Literary Festival?

To all those who have tried to get the book and failed, you should have pre-ordered it. I got it on the friday before it was officially published.