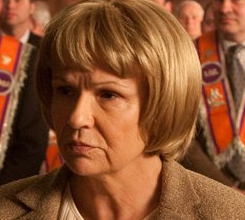 There was a part of me that wasn't looking forward to watching 'Mo'. I wasn't sure that Julie Walters could carry it off. Idiot. Of course she could. She grew into the role so that after half an hour you really did imagine she really was Mo. She even get her voice right.

There's no doubt about it, this film was reverential in the extreme and glossed over many of Mo Mowlam's weaknesses and faults. But I'm glad in a way. I'm not keen on biopics that tend to concentrate on negatives. Mo's fundamental humanity and ability to empathise with complete strangers was captured brilliantly. There's no doubt that she was an integral part in bringing about the Northern Ireland peace process, and although Blair didn't come out of it well, the film actually made the viewer understand why he moved her when he did. It seems reasonable to assume that he had noticed her gradual deterioration and needed a new face to enable the process to progress. The portrayal of Mandelson was glorious, although I imagine he was shifting uncomfortably in his seat if he was watching.

Gary Lewis, who played Adam Ingram, must be in line for an award for Best Supporting Actor, after putting in a stellar performance. I cannot say the same for the actor who played David Trimble. Anyone who has ever met Trimble would acknowledge that he is a very different character to the one portrayed in the film. Similarly, I had assumed the Peter Kilfoyle character was actually John Prescott, until they mentioned Kilfoyle's name. He hasn't had black hair since the 1970s.

The other negative point is that at two hours ten minutes, the film was at least 40 minutes too long. But that's nitpicking. It was a very moving (yes, I shed a tear) film which captured the essence of Mo Mowlam and her flawed genius.

I met Mo a few times. I even interviewed her once, for half an hour, when her autobiography came out. I started off the interview with a smart arse question and she reacted very badly. It taught me not to do that ever again. Once we got going, her real character came out. In fact, I've still got it somewhere on a CD. Perhaps I should upload it.

So, all in all, a great success for both Julie Waters and Channel 4 for commissioning it.
Posted by Iain Dale at 11:08 pm

What an epic program. It made me realise that politicians can (with all their faults) be a force for good.

How I wish Mo was still around.

Iain Dale is a Conservative, isn't he? It's just that his "private" admiration for people like Blair and now Mo Mowlam (RIP) is beginning to look like a trend - or an admission.

No wonder the Tories are doing relatively badly in the polls recently. They can't even rely on their own (self-proclaimed) allies.

Do get over yourself. Being a member of one party does not preclude one from seeing some good points in opponents.

Why anyone would want to waste time watching a programme about another mediocre socialist windbag is beyond me.

Iain, one bum-pinch and you are anybodies ....

I wanted to vomit for almost the whole time. Fortunately I am a masochist so this was fun for me.

Due to an early start this morning its on my recorder - don't tell me the ending ;-)

If you have interview then this is one vote for uploading it.

denverthen - what a very silly, indeed foolish, comment. It's the fact that Iain can rise above partisan politics and admire the qualities (while acknowledging the flaws) of a politician such as Mo Mowlem that is making the Conservatives the attractive, big hearted party they are becoming. It is all in very stark contrast to the mean, ruthlessly tribal culture that has inflicted such damage on Labour. The party that puts humanity above tribalism certainly wins my vote.

Why upload the CD? Why not sell it?

Partly true. She was very anti-unionist but also very ill. She was losing the ability to manage her brief. She could no longer cope intellectually with complex issues, couldn't take or hold a brief and her memory was so bad she would be in discussions and forget what had just been said. This made her very easy to manipulate and rioll over - and she was quite aware of her shortcomings and failing powers and paranoid at making mistakes.

This meant that Downing Street had to go around her which suited the centre's control-freakery anyway but increased her frustration. I think it was a sign of Blair's weakness not to move her sooner.

When Mandy came in he had a terrible mess to recover. She may have moved the process on but towards the end I really do think history will assess that she helped create the instabilities we are still coping with today - well , we hope we are coping with them but perhaps we will know more later today.

In dissembling for years over the true nature and extent of her illness she did a disservice to her office and the people she was attempting to serve.

That might be an uncomfortable truth but it's a truth nevertheless.

There's a great deal to be said for personal integrity. If a Minister is seriously unwell, to the extent that their judgement is affected, he/she should recognise that clinging to power at all costs is morally indefensible - and step down. Mowlem did not - and it's debatable as to whether her contribution to the process overall was beneficial.

The same could be said of many others - including Brown.

What concerns me slightly more is that, within a few months of an election, Channel 4 has presented an admiring mockumentary tribute to a Labour Minister who died relatively young and in tragic circumstances (and is therefore hard to criticise).

Is this going to be balanced in some way? Perhaps, but I won't hold my breath.

Surely, people, this program shows there is one thing that unites us - Tory and Labour, left and right, brown yellow and white:

We _all_ think Mandelson's a twat.

Paul Moloney: But Mandleson spoke the truth on this occasion. Mo called him an "evil c***" for saying that her tumour was much more severe than she was letting on and that her actions were bizarre at times. This was true.

It just shows that even liars speak the truth sometimes. After all, didn't Alastair Campbell say Brown was "psychologically flawed"?

Mo Mowlam was an old school Marxist who got into bed with Sinn Fein-IRA in the 1970s.

During her tenure as Secretary of State for Northern Ireland, she showed her epic contempt for the democratic process and the rule of law and her abiding affection for any murderous thug with a gun (provided, of course, the murderous thug was anti-British and therefore a crusader against imperialism).

The way that this vile old woman has been subject to pants-wetting hagiography over the years is baffiling until you realise that commentators like Mr. Dale (who, in all likelihood, will delete this post) are superficial, ill-informed and motivated by whatever makes them feel warm and fuzzy instead of by what is right.

word verification: "phailism" - pretty much the ideal description for contemporary political thought as exemplified by the likes of David Cameron and Iain Dale.

Democracy in action Mr Dale. Are the roads blocked in Scotland and Wales with all that bad weather you are having over there?

"There's no doubt about it, this film was reverential in the extreme and glossed over many of Mo Mowlam's weaknesses and faults."

So in other words, utterly and completely pointless.

Denverythen .... Iain is obviously far too nice a bloke to be a politician. I hope he sticks to publishing.

I do not know how this programme was advertised but it sounds clearly more hagiography than biography.

"Do get over yourself. Being a member of one party does not preclude one from seeing some good points in opponents."

In the early days of Mo Mowlam's term of office in NI, a fairly senior civil servant (an Englishman by the way) expressed his exasperation with her. "She thinks you can solve everything by talking to people."

I have no doubt she was very charming and would make a good companion at a dinner table, but I always regarded her as a very poor Secretary of State. Peter Mandelson was the best of the Labour ministers, closely followed (less surprisingly) by John Reid. The present agreement (for good or for ill) was achieved by the bullying of Peter Hain rather then the charm of Mo Mowlam.

It seems Tony Blair didn't regard her highly. She was too popular in the Labour Party to be sacked, so he gave her a non-post where she couldn't do any damage.

I she had any success, it was only in making Sinn Fein appear respectable (marginalising the moderate SDLP), eventually driving the Unionist voters into the hands of the DUP.