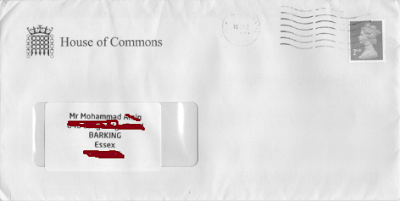 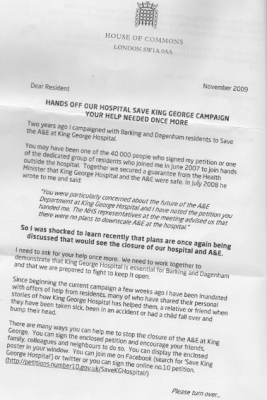 Following on from the David Lammy story earlier today, I've got yet another example of a Labour MP using taxpayer funded facilities to fund party activities. Again, the MP concerned, Margaret Hodge, is campaigning against her own party's decision. She should be free to do that, but she shouldn't be using House of Commons stationery to do it. At least she appears to have had the good grace to pay for the postage herself, for which I suppose we should be thankful. As I understand the rules you are not allowed to use House of Commons letterheads or stationery for non specific addressees.

Her Conservative opponent, Simon Marcus, may be asking some questions of the House authorities about this.

* No doubt the sick idiots who accused the David Lammy story of being motivated by racism, will now say that I am motivated by sexism for this post. Water. Duck. Back.
Posted by Iain Dale at 6:08 pm

This letter is to a specific addressee.

wv: di bin << where I'd immediately put any letter from Margaret Hodge.

It'll be antisemitism this time.

Address not very well obscured, there. What's the evidence that this is "Party Activity" - as you yourself say, it's against Government policy, not for it - looks like an MP campaigning on a local issue, which must be part of what they're for...

Darling is more likely to have advised Gordon to go to the country. The financial problems have miraculously been held at bay until now, but with borrowing far higher than admitted, gilts starting to stick, interest rates rising, and the pound easing down, the whole thing could car crash any day.

Brown would do better for the Labour Party, for Britain and himself to go now. Darling knows the score.

Brown probably won't listen. Mandelson might be asking Gordon to wait while he gets into position, with the carrot of a nice job in the WGO hierarchy created at Copenhagen or the IMF.

Mandy has connections and can fix Gordon up.

erm, data protection alert - you should obscure that address a bit more Iain.

The envelope was (with the addition of a label), but the letter wasn’t. So, certainly a question that would need to asked?

Iain you are breaking data protection act rules on here by letting the address be seen.

You might have a point. If, of course, you could actually see the address.

I dunno. Its to do with parliamentary expenses so the rules are definitely overly complex badly written nonsense designed not to be followed anyway.

On the wider issue: Margaret Hodge is being funded by the taxpayer and the Unions and therefore by the taxpayer again through the union modernization money laundry.
After all this INVESTMENT in ROLLING OUT the wonderful Mrs/Ms (dunno) Hodge all she can do to persuade her own party leadership not to close a hospital is hold hands with some people outside it. (Oh and be photographed doin' the handy holding thang.)

Re Data Protection. Even if you could make out the full name and address (I can’t) I’m assuming that this letter was voluntarily given to Iain by the recipient (Iain?). Even it wasn’t, displaying a person’s name and address is not, as I understand it, an offense under the ‘Data Protection’ bits and pieces. In which case, nothing to see, move on..

(Ok, it might be under other bits and pieces.)

My memory may not be what it was, and if it isn't I will gladly apologise to Mr Scott whom I know reasonably well.

But I do recall receiving an invitation to this meeting from the Member for Ilford North on exactly the same subject, and contained within a franked HoC envelope!

Had you been in correspondence with him before on the subject? If so, it's fine and within the rules.

Why is this news worthy?
They will, they always will, and anyone new will do the same thing?
If we don't all accept it, we will end up reading this sort of petty thing over and over and over.

Glad to hear that.
But how do you know that Mrs Hodge and her correspondent are not in that same position?

Because this was one many, and the letter wasn't personally addressed.

Iain,
I doubt very much that I was the only person invited to that meeting by Mr Scott.
Whilst the envelope was addressed to me personally, the content of it was an A5 flyer that did not bear my name!

Perhaps both Hodge and Lammy are feeling confident that fleecing the taxpayer is once again unlikely to receive serious sanction, since the arrival of Sir Ian Kennedy.

His expensive new quango IPSA, allegedly intends to reject the full implementation of the Kelly Report, despite it having been agreed by all Party leaders.

I hope those leaders are aware of the possible voting consequences of a public, which will surely reject a return to the Westminster gravy train.

Perhaps Sir Ian should phone a friend before he sets the expenses circus in motion once again.

Better still, install the full Kelly findings as a matter of urgency.

Iain, you need to get things in perspective the whole geen lobby and Daves "vote blue go green" will sound like a complete fraud if he links it to C02. If you think MPs expenses are fraud wait until the spot light turns on the Global Warming Industry.

Any MPs reading this. The fastest way to get the spotlight off you is to get a review of global warming science done and the Government grants they are sucking up.

This petty attack is beneath you Iain. From a dedicated Tory.

You haven't blogged about Steve Hilton. Well, you were asking for it.

mtrcricket, no, it really isn't. And if you really were a Tory you too would be questioning why the taxpayer should pay for party political propaganda.

Hve you told your friend Nadine Dorries about this? She was formally reprimanded by the Standards Committee for doing exactly the same thing, though I don't remember you mentioning it a the time.

If that is true, I would have no hesitation in condeming it. I HATE this kind of abuse.

24. In evaluating this case, the Committee will no doubt feel it right to take into account the fact that Nadine Dorries was first elected to the House in 2005. She has apologised for her error, as she now accepts it was wrong to use House stationery in the way she did. She has also put in place new arrangements designed to ensure that a similar mistake is not made in future. As she paid for the stationery herself, there is no question in this case of any misuse of public funds.

25. Nonetheless, Nadine Dorries' action was, in my view, a clear breach of the House's stationery rules. I therefore recommend that the complaints by Mr Lewis and Councillor Cliff be upheld.

We have just had a complaint against Wakefield Labour MP, Mary Creagh, upheld.

She used her comms allowance to put out a letter in the redrawn constituency which includes Horbury & Ossett as "MP for Wakefield, Horbury and Ossett."

She said she did it to make people aware of the boundary changes.....She was made to pay the costs back.

Maybe Nick Griffin made her do it.

If she paid the stationary I see no problem. During the Kosovo war I wrote to various MPs decrying this illegasl war & received replies from a number of MPs on both sides. George Galloway sent me copies of the Hansards with the debates on the subject - a courtesy I appreciate & have found useful.

Was he wrong to do so? Were all the MPs who replied on Commons stationary wrong to do so or was it only wrong of those MPs opposed to government policy (helping the openly genocidal KLA) to answer while OK for those in favour?

Hodge is not campaigning against Labour, she is campaigning for her continued cosy income and access/influence exponentially beyond her capabilities or worth.

But isn't this what the so-called communications allowance is supposedly used for?

This is nothing new, my own Labour MP (Dudley North) has been doing this for the last 3 years at least.