Nick Clarke Talks About Being Legless 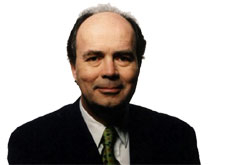 While I was at the BBC last night I picked up a copy of their in-house magazine (known as BBC Pravda) Ariel. An article on Radio 4 World at One Presenter Nick Clarke caught my eye. Nick has just had to have a leg amputated because of cancer. He tells of a listener who wrote to him saying he had been as affected by his ansence from the airwaves as he had been by the wthdrawal from service of the Routemaster bus! After describing himself as legless in a World at One newsletter, a listener wrote in saying: " I hope you don't mind clarifying one point - are you really legless, or do you still have a remaining leg?" I hope he's back on the radio soon.
Posted by Iain Dale at 3:38 pm

It's sort of like the Cook and Moore 'Tarzan' sketch...

"Your right leg I like, when that leg came through the door I thought to myself, now that's a really nice leg, perfect for the role of Tarzan...... I've nothing against your right leg...... unfortunately, neither have you"....

I remember Clarke from years ago when he was on BBC 'Look Northwest'. He was a reporter for them. His contemporaries included Stuart Hall, John Humphrys and David Davies (FA Chief Exec)