42% of Kids Born Outside Wedlock 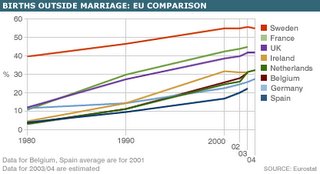 These figures, out today, are on the face of it rather worrying. The number of
children born outside marriage has gone up from 10% to 42% in 25 years. BBC
Online reports:

The proportion of children born outside marriage in the UK has leapt from 12% in 1980 to 42% in 2004, according to the Office for National Statistics. In contrast, 15 other EU countries had an estimated average of 33%, the annual ONS' Social Trends report said. The average UK household size fell from 2.9 to 2.4 people from 1971 to 2005. This was due to more single-parent families, smaller families and an increase in households of just one person, the ONS said. From 1986 to 2004, the percentage of non-married people under 60 who cohabited rose from 11% to 24% among men, and from 13% to 25% for women.

I am not qualified to comment on this in detail but it seems to me that the increasing crime rates among the country's youth cannot be totally divorced from this. I think something like 80% of some kinds of crime are down to youth offenders. In some parts of Britain children are growing up with no male influence in their lives at all. I remember a primary supply teacher telling me how he was often mobbed by children in the playground. They would hold on to his legs as to them, being male in a position of authority, he was an oddity - almost a celebrity. Single mothers have one of the toughest tasks life can throw at them but it's often just as hard for the fathers too. I don't pretend to have an answer. It's no good indulging ourselves in moralising lectures yet at the same time we cannot just stand by as if it doesn't matter. The figure on the graph which interests me is Germany. Perhaps we should be looking to them for advice. Ideas on a postcard please...

From the graph, it seems to me that the rate of increase (gradient) has decreased since 1990, while leaping massively in the 1980s. Added to that the unavoidable conclusion that teenagers (the bulk of youth offenders, surely?) now would have been born between 1986 and 1993, then it seems to me we should be asking whether the thatcher government was to blame?

I think the rise in youth crime is more down to parent's increased negligence rather than this. My father died when I was very young, but I never became a hoodlum; one decent parent with has your best interest at heart is enough.

Two married parents would be better of course!

anonymous, where have I attacked single mothers? Saying that it is a problem that many kids have no male influence in their lives is not an attack on single mothers. Grow up.

Careful with your stats now!

You have to distinguish being born out of wedlock to being part of a single parent family - they are completely different and you have conflated them.

I tend to think one major factor in this is simply that a lot of parents simply cohabit today. The stigma attached to children of cohabiting parents withered away some time ago. Women are also less keen to marry to provide legal protection and financial security because many more are economically independent and so don't need it as an insurance policy as used to be the case. The decline in church-going also plays a part. None of these are wholly bad developments and most are generally positive.

anonymous, you are absolutely right in what you say in your first para. I am as I type this slapping my own wrists. A vision to be sure... I may have given a slightly wrong impression here, but it doesn't alter the basic point, which is that the trend of single parenthood is on an inexhorable rise, which cannot be a good thing, whatever your political stance may be.

Why cannot single parenthood be a good thing?

Anonymous said...
Why cannot single parenthood be a good thing?

The same reason why having a single arm or a single leg is not a good thing.

It may not necessarily be a bad thing, it might even work, but there is an obviously better and more effficient situation right round the corner, which should be promoted where possible.

All the arguments I've heard against living with two parents instead of one (abuse, a bad role model, etc) could just as easily be applied to a one-parent situation.

So do you think those parents should be of different genders?

Re. comments about the anonymous comments, it is to be hoped that single parenthood is a good thing - certainly for those who have become single parents as a result of the war in Iraq.

More generally, where is the proof - rather than the arguments and the belief - that having two parent (even of the opposite sex) families is better than having only one?

How ridiculous, I see you're living up to your name. Of course two parents are better than one. Surely no child would actually choose to have one parent. I'm not saying single parents are bad parents. I;m sure most single parents would like prefer not to bring up a child on their own.

Ian, I think the preferable state of affairs is for a child to have a mother and father. That's not to say that two people of the same gender are not going to be good parents. I am all in favour of gay adoption, but I would still give preference to couples of different genders.

'Surely no child would actually choose to have one parent' - how do you know?

'I;m sure most single parents would like prefer not to bring up a child on their own.' What is your evidence?

'the preferable state of affairs is for a child to have a mother and father.' Who's preferred state?

As Mrs Merton might say, you've set off a heated debate!