Galloway on Gay Rights in the Middle East 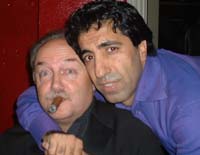 Britain is in no position to blame the Middle East for the harsh treatment of homosexuals, according to George Galloway.

Speaking exclusively to PinkNews.co.uk, the Bethnal Green and Bow MP claimed that years of military intervention and interference in Arab countries by Britain and the West meant they couldn’t complain about homophobic attitudes in the Middle East and said anti gay laws could be justified by the Koran.

What planet does he live on?

Mr Galloway told PinkNews.co.uk: "Intervention by Britain in the Middle East has a bad name unsurprisingly. In the context of military intervention that you have to see it. If you go around the world invading other peoples' countries, slaughtering their compatriots, and occupying them and then arming and training the puppets that you install in your wake, you're not in a position to make interventions of other kinds in terms of their attitude to issues like this.""There are a very large number of homosexuals in the Arab world, the official rhetoric is often well short of the actual practical situation is on the ground."

Of course it is George, of course it is. They are havens of understanding and tolerance. Ever been out on gay scene in downtown Cairo? No? Perhaps it's because there isn't one. I wonder why that would be...

To read George's unedited views on this issue click HERE.
Posted by Iain Dale at 8:02 pm

He really is something isn't he.

Is it not possible to be unhappy about Western Actions in ther Middle East AND be upset by their bigoted beliefs about Women, Gays and others?

Neocons, whether you agree with them or not, want to meddle in other countries affairs, precisely because they want them to be liberal democracies.

Does he have no view on the subject, or is he still trying to decide whether stoning or hanging is the appropriate punishment?

In reference to The Koran, or The Bible for that matter, it is no more than free speech for someone to say "I believe being Gay is a sin". But to accept that belief as a reasonable reason for legal bigotry is another matter entirely.