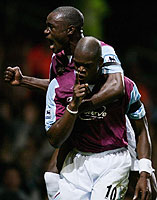 Great game at Upton Park tonight. West Ham played some blinding football in the first 15 minutes and could easily have been two or three up by half time. Birmingham came back into it and had a lot of possession but were so light up front that they only had one or two half serious chances over the entire 90 minutes. Marlon Harewood had a superb game, scoring in the first ten minutes and the converting the rebound off a saved penalty. Dean Ashton wrapped it up with an easy header to make it two goals in two games for him since he signed from Norwich. Harewood has 13 Premiership goals in 25 starts. Dare I suggest that he might offer something to Sven's World Cup squad that Peter Crouch doesn't - ie goals? Surely an in-form Harewood should get a tryout ahead of that lump Heskey? After 7 wins on the spin, West Ham are now unbelievably up to 6th, but we now haven't now got a Premiership game until March 3rd. I had to leave 12 minutes from time to get to the BBC to do the paper review at 10.45. I got there just in time but the papers hadn't arrived anyway so I had to do it from unreadbale photocopies! I'm now sitting in the BBC Newsroom waiting for the real papers to arrive before the longer paper review at 12.15am. Feel free not to stay up to watch!
Posted by Iain Dale at 11:28 pm

I suppose you edged it...

I'd sooner see Harewood go to Germany than Crouch or Heskey, certainly on current form.

I saw the paper review Iain, (the early one) but I thought they treated you quite badly. It would have helped if the other chap had listened or responded to what you said, at least it would have got a bit of dialogue going. Not worth missing the last 15 minutes of Birmingham's delightful humiliation for.

I stayed til the end of what was a fluent and entertaining West Ham performance; my mistake was choosing not to brave the queues at Upton Park tube and deciding foolishly to walk to get the Jubilee line at Canning Town instead. Lower Barking Road late at night is a bit scary.