The Highs and Lows of a Political Canvasser 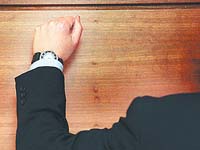 Antony Little was Conservative Candidate in Norwich South at the last election. He's 26 and teaches at a high school in Norwich. Just the sort of candidate we need to encourage. and he's also got a rather good BLOG. His latest posting reveals the frustrations of a political canvasser. Make sure you read the last paragraph. No matter what Party you support, I suspect you'll feel a degree of empathy...

Canvassing is one of Britain’s great political traditions. We live in a country where a near stranger comes onto your land and asks you about your civic right to vote in a secret ballot and then leaves to record that information on a database. In many countries, such as France and the USA, canvassing simply isn’t done. I think it is a great way of bring the feet of politicians back down to earth. This month we’ve delivered a leaflet across the whole of Bowthorpe and Earlham and sent out roughly 5000 questionnaires. But nothing prepares you for the views of the population.There are three groups of people who are, though, making life though. The first are those people who simply won’t open their doors. I think that’s running at about 5% at the moment. They are in, the windows are open, the TV is blaring out and they ignore you.Then there’s the next group, I think touching 10% who don’t care why you are there but want to be rid of you. One look at somebody they don’t recognise and it’s “no thank you,” then slam! Is that a “no thank you” to politics, the Conservative Party, me personally or simply anybody in the world you don’t yet know?Lastly there are the group who tell you they simply won’t vote. Now I’ve never accepted the argument about not voting. The parties aren’t the same and yes your vote will make a difference (Labour majority in Bowthorpe and Earlham is 14 votes). However, these days there seems to have been a culture shift. During much of the previous 50 years not voting was frowned upon and even if you didn’t vote you didn’t admit to it. Nowadays people wear the “non voter” label like some kind of badge of honour. It’s almost as if some of them say, “you can’t hold me responsible for the state of the nation because I don’t vote.” Actually, it is those people I DO hold responsible for the state of the nation. As we went down the streets in West Earlham, two gents were washing a car. They enquired what we were doing (well, half a dozen people clutching clipboards and discussing what Thatcher would say about the state of the pavements in Earlham). When I explained who we were, they both said they never vote. Then one ventured the idea that no time or money was ever spent in Earlham whilst places such as Lakenham, Mile Cross and Marlpit get all the investment (never mind if this is true, it is what he thought). When I explained that if he felt like that he needed to change the people in charge – Labour have won the area since the 1960s – he said, “oh, no, voting’s not for me”. Rather like the curious argument that “I’m too old to vote” (no word of a lie, people do say that) this is a bit of a cop-out. If people like that gentleman had voted (plus 13 more), I’d have been their Councillor for two years and I think things would have been different. Also there are the people who say they don’t vote but just lie. After elections the parties are given what is called a “marked register” which lists who did and didn’t vote. It doesn’t tell us how you voted, just if you did or not. During the day 23 people told us that they never vote but had done so only last May. We know that they almost certainly wanted to hide the fact that they weren’t voting Conservatives (in fact the common view is that people like that vote LibDem but are utterly ashamed to admit it) but why feel the need to lie? Canvassers don’t attack and if you tell the truth then we don’t come back. If you say, “I might vote for you” when you don’t mean it, then we will come back! In total, we met (no word of a lie) 136 people who said they weren’t going to vote. That is more than the total number of pledges for Labour, LibDems and Greens added together. It seems all politicians have more work to do.During our Friday and Saturday canvassing sessions we came across a variety of issues. Youth provision needs improvement and people want real street policing to be re-introduced. Council tax is too high but, sorry LibDems, there was no appetite to replace it with the higher-charging Local Income Tax. Roads and speeding came up and also the development at Three Score was a big concern.

We got 2 new members, one new poster site and a collection of very angry dogs.We saw one naked woman, one naked make UEA student, two babysitters, three builders, three people unable to speak English, one person who didn’t know what the Conservative Party is, two people clearly still drunk from the night before, two of my ex-students, one Chairman of the Bowthorpe Labour Party, one Labour Councillor, two domestic incidents, one police van, two cleaners from the UEA and (amazingly) three people who claimed to work for the British Nuclear Authority – all in different houses.All we need to do now is to get them to vote.
Posted by Iain Dale at 10:18 pm

I remember one instance of hurdling a fence (and you know I have never been an Olympian)... as a dog flew at me. Julie said my feet never touch the ground I was moving so fast.... or the time when I got a message on my phone threatening me with an ABO (Im sure they meant ASBO) if I ever went round their house again.

I put them down as undecided..... or possible Lib Dem.

People who say they "won't say", "will vote but don't know how", "we'll see...", "I make my mind up according to issues nearer to polling day" or "am thinking about it" are ALL LibDems!

LibDems tend to be ruder and more evasive IMHO. And does anybody ever meet out-and-out proud LibDems on the doorstep?

Is there a watertight counter argument? Don't try the 'if we all felt like that one' because my canvassee (?) doesn't believe in telepathy.....

Why do you just copy and paste from other people's blogs and articles?

Catherine, I normally only put a link in, but on this occasion I thought what ntony had written was so good that it deserved wider circulation and I wanted to make people aware of his Blog. As a result of me putting this on my blog I am sure he will get a lot more regualr traffic. Part of the point of blogging is to make readers aware of what else there is out there to read. I am only aware of many of the blogs in my Links section because another blogger linked to them on their site.

My past experience has been that the ones who say they haven't decided yet are usually LibDems, but if someone makes a point of stressing it is a secret ballot then they are likely to be Conservative. I haven't found a rule to identify Labour yet though.

John, as a Lib Dem canvasser, I find a similar thing in reverse. Classically, "I am not interested in politics" said to a canvasser for another party means certain Conservative.

I am not sure whether you are right to equate evasiveness with rudeness. Many of those who beat around the bush with you or me are doing so precisely because they want to avoid being rude and saying "you're wasting your time". In fact, they are rather infuriating - I would much rather, "Thanks for calling but I'm afraid I'm voting for X" - nobody's time gets wasted and I am perfectly happy to accept that some people won't vote for me.

Done plenty of canvassing for the Lib Dems, met lots of people who are very pleased to say they are Lib Dems, and found most Tories to be rude, haughty and evasive.... I rather suspect your experience depends on the colour rosette you're wearing...

Because Catherine people like me don't have time to search all the blogs so use somebody like Iain to get the best ones ... Antony Little's blog is excellent and I will check regularly so thank you, Iain.

And that blog post speaks for those dozens of campaigners trudging the streets of this country at the moment.

Walking for miles... being chased by dogs, cats (honestly, these ones were vicious!!) and cattle... getting doors slammed in our faces...