Silence of the Lamb Part 2 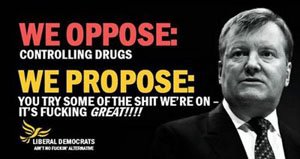 An horrendous thought I know, but imagine you were the leader of the Liberal Democrats, there were mutterings from some of your colleagues about your future, so you called your Shadow Cabinet in one by one to ask for their support. You have a few robust conversations with the likes of Oaten, Hughes and Sir Ming and the next one through your door is your Trade & Industry Spokesman, one Norman Lamb (LibDem MP for North Norfolk and triumphant victor over your humble blogger in May). You think to yourself, "Norm'll be OK, after all I made him, I promoted him to Overseas Aid and then made him my PPS. He's not one to rock the boat." Or is he? The silence from Mr Lamb has been deafening this week, which has caused his local newspaper, the Eastern Daily Press much consternation. So used are they to receiving his twice daily "Lambograms" they thought he must be ill this week when no contact had been forthcoming. Phone calls were made but never returned. Very unlike him, they thought. But what's this? A giveaway line in a national newspaper alleging that Norman had told Kennedy to quit. Is there no gratitude in this world? It makes you think back 15 years to all those conversations Margaret Thatcher had with the likes of Peter Lilley, John Gummer, William Waldegrave and Michael Howard. She had made them all, yet when it came to the crunch, they ratted on her. Nice to know the LibDems are just as duplicitous.

Graphic hat-tip Blimpish
Posted by Iain Dale at 10:40 am

If half as good looking.