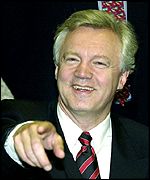 Hot news from Haltemprice & Howden last night was a local government b y election victory for David Davis's local Conservatives. In the Howden ward they overturned a three figure LibDem majority and took the seat by 20 votes. The retiring councillor was Jon Neal, the LibDem Parliamentary candidate who had failed to unseat DD in May. The yellow peril had put up his likely successor to gain a platform on the local council. Don't think that'll be happening now.
Posted by Iain Dale at 9:58 am

Having been fighting the orange peril at home (with similar success) it is always satisfying.

Always nice to see the Lib Dems at their best..... losing that is.

Wonderful news. We york university tories helped out there several saturdays and its v satisfying to see our work pay off. hurrah.