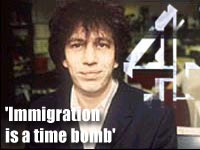 Thanks to Stephen Pollard for this excerpt of Rod Liddle's article in today's Times headlined RIGHT LADS, HOW CAN WE INSULT PARAQUAY? Liddle is an acquired taste but he's often hilarious. And this is Liddle at his best.

"The funniest chants directed at blameless foreigners occurred in a game which, mercifully, never actually took place. Somebody with what we might kindly describe as a sense of mischief thought that it would be a good idea for Millwall to play a pre-season friendly against Iran at the New Den. Common sense — and, I suspect, representation from the Metropolitan police, British and Iranian governments and, possibly, the United Nations — prevailed and the game was eventually called off. But the songs had already been written and were doing the rounds on the various Millwall fans’ websites. “You’re Shi’ite and you know you are,” is, by any token, pretty good. The politically acute, dark and baleful “you’re next and you know you are,” is even better. But best of all was the one to be directed at Iran’s female supporters, a chant which combined in seven short words not just gratuitously offensive sexism, but an incitement to racial and religious hatred: “Get your face out for the lads.”

I thought it was a frankly pathetic article. Anyway when ever I chance across a piece of Liddle "wisdom" these days, I can't help but think of a column he wrote not so long ago questioning the credentials of Bono to talk about the problems of Africa. He should look in the mirror from time to time.