Robo Whip & Nadine Get it Wrong 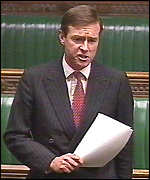 Conservative MPs are none too impressed at their new leader’s choice of Deputy Chief Whip. It’s unusual to say the least to appoint someone with no previous ‘whipping’ experience and one ex-whip said the news would be received in the whips office ‘like a bucket of cold sick’. Ex SAS soldier Andrew Robothan has already had a less than distinguished start to his new duties. On Wednesday it was he who instructed Davis defector Nadine Dorries to go into the chamber before Prime Minister’s Question Time and reserve seats for the most fragrant female Tory MPs to surround their new leader. Looks good on TV, you see. Old Tory lags Eric Forth and Andrew MacKay quickly clocked what she was doing and told her in no uncertain terms it was against the rules and to push off. So instead of seeing Cameron surrounded by adoring women TV viewers were treated to Eric Forth’s leather waistcoat and kalaedescopic tie and Andrew MacKay’s grey suit. Robothan, who was an early recruit to the Cameron team, pitched to be Chief Whip on the basis that he was the only one who could control Davis lieutenants Derek Conway and Andrew Mitchell. That pleasant task now falls to Patrick McLoughlin, possibly the only ex-miner to have ever joined the Tory top table.

From my diary in today's Independent on Sunday
Posted by Iain Dale at 10:41 am