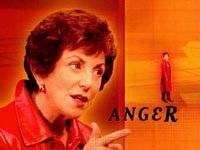 The article below appeared in this week's Sunday Times News Review. It describes Edwina Currie's experience when she applied to be a Non Executive Director of her local NHS Trust. I don't normally reprint articles in full, but this is worth it. Make sure you read the whole thing.

Absolutely unbelieveable tale.. sadly I am totally unsurprised. The staggering level of incompetence in the public sector is entirely attributed to the woefully inadequate appointments.

If I ever decided to turn my back on the Tory party (which I won't) and join the Labour of Lib Dems (uuuurrggghhh) then I will do so safe in the knowledge that a juicy £35k job counting paperclips in my local Health Authority awaits!

Strewth, if you take out the predictable self-serving then there's some very good points here. However, in Edwina's case, following her disastrous stint as a minister, turning a Tory safe into a Labour safe, her splendid 1994 MEP campaign, then she might be better facing the reality that maybe she gets rejected because she ain't got any talent.

I'm sure i saw a photo of her once tht made her face look like she HAD hit a brick wall :-P