How the LBC Election Night Programme Is Shaping Up 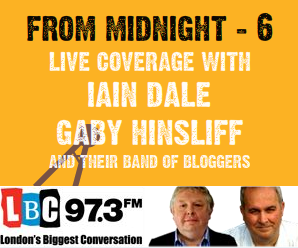 As election night nears, I thought I would tell a little bit more about the election night programme Gaby Hinsliff and I will be presenting from midnight on LBC 97.3. We're keen to maintain the spirit of the programmes I did last year on PlayRadio. We want lively, intelligent discussion for a political audience, interviews with many top politicos, and a faster results service from the key seats than you'll get anywhere else. We're mobilising the blogosphere are Twitterers and are keen that blogreaders from across the political spectrum can feed in information, rumour and results. If you're going to be at a count you can send in info in the following ways...

Phone: 0845 6060973
Email: studio@lbc.co.uk
Twitter: @lbc973
Text: 84850
We've decided not to have any politicians in the studio, although we will be talking to various politicians throughout the night. We were keen that our studio pundits should know a lot about seats and candidates so we've asked three party insiders to be with us for the six hours. Representing Labour we have former General Secretary Peter Watt, for the LibDems LibDem Voice's Mark Pack and for the Conservatives former Director of Campaigning at CCHQ, David Canzini. We'll also be joined by Andrew Hawkins from ComRes for the first hour or two.

There will be a band of bloggers in the LBC newsroom using their contacts to pick up news from every region of the country and from their own parties. Charles Crawford, a former British Ambassador, will be concentrating on world reaction to what's happening. Peter Kenyon and Anthony Painter will be monitoring the Labour blogosphere, James Graham and Chris Hall will be doing the same for the LibDems, while Phil Hendren and Mike Rouse will centre on Tory blogs, whilke Nick Drew from CityUnslicker will report on business and city reaction to what's going on. My three colleagues from the Total Politics Party Lines blog, Amber Elliott, Katy Scholes and Emily Sutton will be trawling the minor party websites and other interesting sites. All of them will be appearing on air throughout the programme.

Alex Blance will be reporting on what's happening on Twitter, and we'll be getting our fill of swings and marginality from our resident psephologist, Gareth Knight. And for a bit of light relief, Olly Mann and Helen Zaltman from the Sony nominated Answer Me This Podcast will be with us throughout the night answering your wierd and wonderful political questions. Or not.

Anyway, I hope that's given you a taster and that you'll join us for at least part of the night. LBC can be found at the following locations

I'm foolishly having an 'election party'. I'll be wasted by the time the picture's clear on what the result will be. God help my blog readers.

Looking forward to it Iain although I will struggle to listen to you as well as watch the coverage on the beeb and sky.

Well, it seems that Labour have already abandoned their first constituency. I do feel sorry for their candidate in North Norfolk, Phil Harris. Not nice to be betrayed by your leaders.

Sadly, I'll probably miss the show, Iain, as I plan to be covering a count throughout the night. Hopefully I'll be able to have access to my emails and blogs to be able to post live -but legal!- updates as the night progresses.

I say sadly as I enjoyed the show you did before.

What I cannot understand is how you can sit down next to Charlie Whelan and chatter, exchange pleasantries and give the impression that this is all good fun, and Whelan is not the evil incarnate you and other Tory bloggers portray him as.
It doesn't help the average voter to see the co architect of everything that is wrong with the Labour party, just yucking it up with the people who know what he is.
Its like Hitler and Winston Churchill exchanging recipes, and makes it look even more like Politics is just a game for rich people whatever party you belong to.

So Iain, will this Band of Bloogers be able to play the same tune at the same speed, of should we expect a cacophony ?

I'm going to connect my DAB radio in the TV room so I can get both.

"Representing Labour we have former General Secretary Peter Watt" !!!! What???

Do you really think Brown will think he is representing labour?

All of which reminds me of the shower of sleaze that Labour have covered themselves in over the last 13 years (Browns secret slush/polling fund for one).
But has this been rammed down their throat? No not really. This is where its different from 97. The expenses scandal has tarred everyone with the same brush.

I'll have the sound off on the BBC, and Iain and guests on, providing it doesn't wake up the wife!!