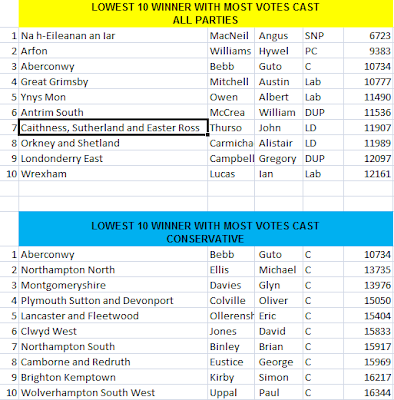 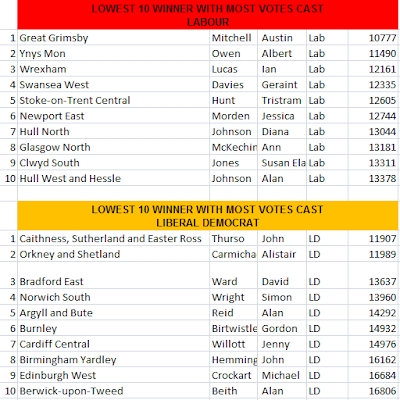 It would be interesting to see these figures in terms of vote shares, as obviously they are skewed by some constituencies (most notably the Western Isles) having very small electorates.

What would be very illuminating, in the context of the proposed referendum on AV, is what the percentage of the votes cast those winning totals represented.

Who won with the lowest percentage of votes cast in their constituency?

Any coincidence that a lot of the lowest votes to win were in the devolved nations ? Anything to do with needing around 15 - 20,000 people less per MP in our Devolved nations whilst England remains under represented ?

Was thinking about linking this, but I am not sure we have enough information to tell us what it means Iain...

@engliscdragon
It is not just Wales and Scotland (in the latter case despite a law purporting to make constituencies in England and Scotland equal in size) having smaller constituencies- Labour seats in each country have smaller electorates than Conservative or LibDem ones. Arfon and Aberconwy were held by Labour in 2005 and have smaller electorates than neighbouring seats held by Plaid Cymru or Conservatives in 2005. Dwyfor (PC) to the west of Arfon has over 10% more voters than Arfon; Aberconwy is between Arfon and Clwyd West (Con) which has 30% more voters than Aberconwy. Arfon and Aberconwy between them have fewer voters than the Isle of Wight.
For practical reasons Orkney and Shetland and the Western Isles have to be separate constituencies, but apart from those all the small constituencies just happen to be ones held by Labour in 2005. The Ulster votes listed are cases where DUP won with one-third of the votes in a six-way battle - the constituencies were not that small
You may note that the second-smallest Cons winner and the third-smallest LibDem winner got more votes than all ten of the small Lab winners listed.

Any coincidence that a lot of the lowest votes to win were in the devolved nations?

Yes. The reason for those seats requiring so few votes is to do with geograophy, not devolution. The geography of north Wales, the Scottish Highlands and the islands in both is such that they get undersized seats. So do very rural parts of England such as northern Cumbria and Northumbria - but few people ever complain about those.

For information, the bottom ten winners by percentage vote were:

The lowest winning Conservative was Michael Ellis (Northampton North) at 34.11%. By contrast, here are the highest non-winning percentages:

I'm sure that information tells me something but I have absolutely no idea what ... which is very frustrating as one of the constituencies mentioned is my own!

The reason for those seats requiring so few votes is to do with geograophy, not devolution.

But surely it also has in some cases to do with the seats being 4 way marginals. Take Aberconwy-- Plaid's 17.8% was good for fourth place.

In 1992, Inverness, Nairn and Lochaber had the Conservatives score a remarkable 22.6% for 4th place, certainly the closest four-way marginal in a reformed Parliament.